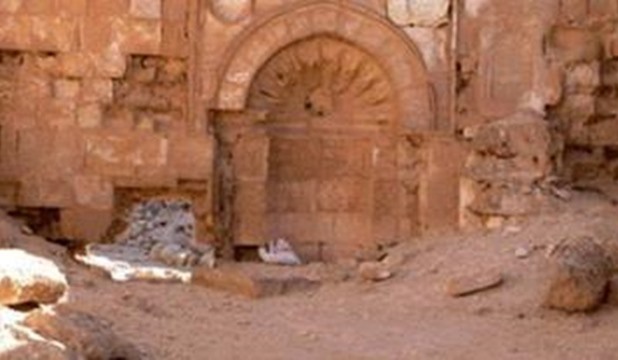 Sinai area is rich in many Greco-Roman antiquities in several places as in :

Al-Khwainat includes the remains of a group of adjacent buildings. Anumber of tombstones were found on them with inscriptions in the ancient Greek language and in the form of a human being. As for the Al-Falusiyat, they include a group of churches dating back to the fifth century AD. The Roman geographers mentioned them as Astrassini.

Al-Falusiya (Tel Al-Falusia) occupies an important strategic location.  As it was the meeting place of the beach that connects it to the Farma and the military road.  There is nothing left except the remains of Emperor Justinian's fortress that was built in the sixth century AD to the east for fear of the Persians. . The Bedouins called it its current name because of the large number of Roman coins they found in it.

Dune of the regurgitationIt is an ancient site on Mediterranean Sea shore at the   north of Lake Bardawil. It was mentioned by Ptolemy under the name Cesium. . A number of stones with Greek inscriptions and evidence of ancient buildings at the Roman era have been founded there.

It is located in Qatia village at North Sinai. The remains of archaeological buildings from both eras the Islamic and the Greco-Roman one were spread on its surface . Qatia is a well-known town with many palms, mentioned in the writings of Muslim travelers a lot. It has a water well that Ibrahim bin Muhammad Ali, the ruler of Egypt, restored at the beginning of the nineteenth century. Then It was restored by Khedive Abbas when he visited Al-Arish.

Qatia monuments’ include a mosque from the Ottoman era; an industrial area and the city market.

It is located at the north-east of Rummana village  on the Qantara - Al-Arish road. It contains the remains of the archaeological buildings that  dating back to the Greco-Roman era, where its name in that era. It  also contains a large fortress from that era located on a high hill close to the beach. It is about a fortress with walls made of marine limestone, with rectangular and square towers, and some houses made of mud bricks.  Finally, It is considered one of the most important archaeological sites at Lake Bardawil area.

This area is located on Suez at the main road. Traces of mud-brick buildings; kilns; stores and a large number of pottery pieces, bronze coins and glass pieces were founded in it . The area has a well from the Roman era.