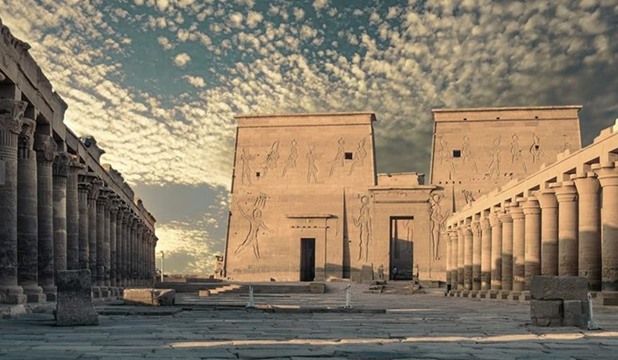 In Aswan city, there are several archaeological places and temples that dates back to the Greco-Roman era, including:

Philae Temple: The monuments of Philae include many structures dating predominantly to the Ptolemaic Period (332–30 BC). The most prominent of these is a temple begun by Ptolemy II Philadelphus (285–246 BC), which he dedicated to Isis, the mother of Horus, the god of kingship.

A scene in mammisi, or birth room, where the birth of Horus was celebrated, depicts Isis suckling her son Horus in the marshes.

The temple of Isis was one of the last ancient Egyptian temples to remain active, as it continued to function until the reign of the Byzantine Emperor Justinian I (527–565 AD), who ordered the foreclosure of all pagan temples.

It is here that a priest of Isis named Esmet-Akhom carved the very last dated hieroglyphic inscription, which dates to the late 4th century AD (394 AD).

The temple was converted into a Christian church and many inscriptions were deliberately destroyed.

Nearby, there also is a temple dedicated to Hathor built by Ptolemy VI Philometor (180–145 BC) and Augustus, the first emperor of Rome (30 BC–14 AD). The Kiosk of Trajan (98–117 AD), which used to front the temple complex of Philae, still stands strong, despite its roof having disappeared.

Its regular arrangement of columns made it an aesthetic delight and was regularly described or depicted by travelers to the island. Isis is once again central to this cult, as the emperor is shown making offerings to her, her consort Osiris, and their son Horus.

All these monuments were relocated from the original Philae island to the nearby island of Agilkia during the UNESCO Nubia Campaign in the 1960’s to rescue sites flooded by the construction of the Aswan High Dam.

The temple gate leads to the lobby of the columns. It was built in Caesar Tiberius era .Their walls were decorated in Caligula; Claudius and Nero era. It is similar in its planning Edfu temple . It has also twenty-four columns with Hathorian capitals, and a door leads to the original temple, which recent studies have proven that its construction dates back to Ptolemy XII era.

The original temple area  is 81 x 38 m. It was built of sandstone and consists of:

A hall that based on six Hathor columns that was known as the Transfiguration Hall.There are three halls on the eastern side: the laboratory room; the storeroom and the donation hall, known as the middle hall.

In front of it is the Holy of Holies, surrounded by several halls to the east and west.

Dendera is the only temple that bears a founding text in Greek that is not visible to the naked eye. It was believed that Cleopatra VII was depicted only twice on the back of the Dendera temple, but it was proven by studying her titles and her distinctive crown that she was depicted in this temple 63 times in different places.

Kalabsha was built during Emperor Augustus reign at the period from 30 BC to 14 AD. It was mainly dedicated to the Nubian god, Mandulis. However, the worship of the goddess "Isis" and her husband the god "Osiris" was taking place in the same temple.

The temple was also used as a church in the Christian era.

A magnificent stone path extends from the lake to the first edifice of the Kalabsha Temple.The first edifice is followed by a colonnaded courtyard, and a colonnaded hall with 12 columns. The engraved wall depict various emperors and kings that were frolicking with the gods!After the hall there are 3 rooms and a staircase that goes up from one of these rooms to the roof. There is an inner corridor between the temple and the wall that surrounds it, and this corridor leads to the Nilometer, which is still in good condition.