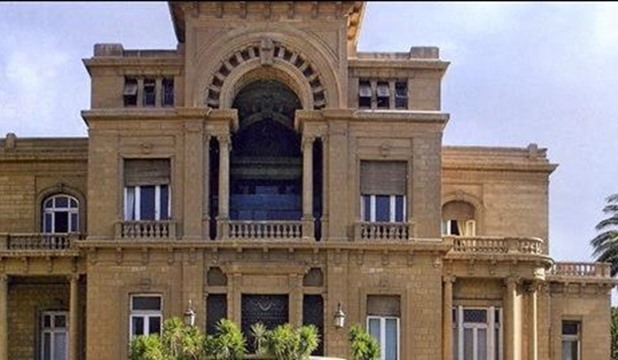 Prince Youssef Kamal Palace in Nag Hammadi was opened on Monday, September 30, 2019 after the completion of the restoration work.

Prince Youssef Kamal Palace was established in Nagaa Hammadi in 1908, and the palace was registered as an Islamic monument in 1988. The palace consists of 9 unique architectural units, built on an area of ​​10 acres.

The architectural units of the palace include Salamlek Palace, the palace, the dining hall, the kitchen, the shrine of Sheikh Omran, the minaret the classroom, the sabil, among others. The nine palace units portray a mixture of European and Islamic architectural styles.

The palace has four ceramic façades, the main north-east facade directly overlooking the Nile and is preceded by a double marble staircase leading to a front porch.

The north-western façade is interspersed with a series of marble balconies, with window openings and the southwestern back facade; which has a secondary entrance to the palace closed by a wooden shutter.The inside of the palace consists of two floors and a basement. One of the most beautiful things in the palace is a wooden elevator made by the Prince specifically for his mother who suffered from heart disease.

The dining hall occupies the southwest of Salamlek and has 4 ceramic façades.

Youssef Kamal is one of the most prominent princes of the Muhammad Ali family. He was a lover of art with a passion for buying paintings. He traveled Worldwide to buy rare pieces of art to gift them to museums.

He is the founder Fine Arts  school in 1905 AD; the Society for Lovers of Fine Arts in 1924 AD, and he is also one of the co-founders of the Egyptian Academy of Arts in Rome

The Prince’s collection of collectibles contributed to the establishment of the Museum of Islamic Art. Those holdings consisted of a group of chandeliers; mosque minerate; swords; gold works; the Qur’an and shields, in addition to his efforts to record these artifacts with detailed descriptions and the date of their manufacture.

Youssef Kamal was a prominent Egyptian traveler and geographer. He  was known for his love of fishing and sailing in historical readings. He traveled a lot to several countries such as southern Africa and some countries of India, and he is a collector of collectibles and books.

Prince Youssef Kamal was one of the richest Egyptians in the first half of the twentieth century. In 1934, his fortune was estimated at about 10 million pounds.  At this year he was considered the richest person in Egypt. He played a major role in the development of a large number of Upper Egypt villages, after he had helped the entrance of some modern agricultural techniques in Nag Hammadi, and he has helped to develop agriculture there