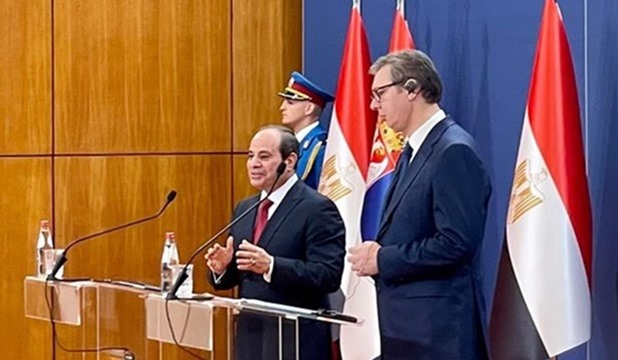 “In the Name of Allah, the Most Beneficent, the Most Merciful”

It is my pleasure to be a guest of your friendly country, the Republic of Serbia, for the first time.

I would like to express my deep gratitude for the generous hospitality of your Excellency and the Serbian government and people. I look forward to achieving fruitful results during this visit, which comes at a vital time, to reflect the extent of the importance we attach to relations between our countries and our common interest in moving them to a broader horizon and a more distinguished level.

I would like to emphasize that Egypt looks forward to strengthening relations with Serbia in all fields, in light of the rich historical relations that bind our two countries at the bilateral level, since the beginning of diplomatic relations in 1908 and at the multilateral level through their key role in the establishment of the Non-Aligned Movement, which Serbia celebrated last October the 60th anniversary of the first conference that Belgrade hosted.

Our meeting today is a culmination of joint efforts over the past period, to push forward bilateral cooperation, and to develop an integrated strategic framework included in the joint declaration issued by the visit, on the strategic partnership between our two countries. It also carries a common vision for various aspects of cooperation in all fields, and ways to enhance them in the coming period, which confirms our common political will and paves the way for a new phase of partnership between the two countries.

At the international level, we exchanged views on various topics and issues of common interest, on top of which are the current developments in the Middle East, the Palestinian issue, and the situation in Libya. We also discussed multiple substantive issues, including ways to combat terrorism and illegal immigration, the developments of the Ukrainian crisis, and its multiple consequences on the countries’ economies, and the efforts of the two countries to overcome these consequences. This is in addition to achieving food and energy security at this vital time, to achieve the interests of the peoples of the two countries.

The Egyptian position is based on addressing all means to reach calm and a peaceful solution to the conflict, and exerting all efforts to achieve this, whether at the bilateral, regional or international level. The importance of finding alternatives and solutions that ensure that the peoples avoid the negative effects of the Russia- Ukraine crisis was confirmed.

Egypt’s efforts to contribute to resolving the crisis were also reviewed through the Egyptian initiative to form a ministerial contact group within the framework of the Arab League, which visited Moscow and Warsaw last April to meet the foreign ministers of the countries and urge all parties to calm and give priority to dialogue and negotiation, leading to a settlement that avoids war scourges and its severe economic effects.


The discussions also dealt with Egypt's efforts to mobilize the international community to combat climate change, which was reflected in Egypt's keenness to host the Global Climate Summit COP-27 next November in Sharm El-Sheikh. We look forward to your Excellency’s participation in the summit to contribute to putting the world on the right path towards transforming pledges and promises to actual implementation on the ground.

Allow me to conclude by expressing my appreciation for your kind hospitality in your friendly country and my gratitude for bestowing upon me the Order of the Republic of Serbia. I look forward to seeing more cooperation and coordination between Egypt and Serbia in the coming period, in order to achieve peace and prosperity to our two friendly peoples and create more momentum for the longstanding friendship between our peoples and countries.