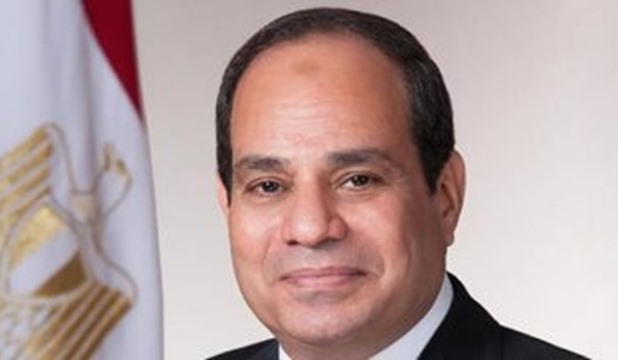 President El-Sisi stated on June 5, 2022, during an interactive session entitled "Towards Resilient and Sustainable Health Systems in Africa" at the African Medical Exhibition and Conference "Africa Health" that Egypt's capabilities are available to brothers, noting that he appreciates and respects everyone who suffers not only in Africa but in other countries.

He added that with will and hope, there will be achievement, mentioning his contribution to the abolition of the hepatitis C virus in Egypt.

President El-Sisi welcomed all conference participants and praised the tremendous effort exerted so far to bringing the conference to this point.

The lack of resources was not an impediment to achieving the objectives, as any objective required balances and funds.

President El-Sisi stated that American companies were recruited to participate in the Egyptian experiment, and that he met with them to discuss how they could help provide treatment for the hepatitis C virus at a cost that Egypt could use to treat millions of infected people.

During that time, "we discovered that the drug costs reach approximately $10,000 per person, and we obtained it from companies at a much lower cost." He thanked the companies that contributed to this project.

"Africa is a promising market, with about a billion and 350 million people, and in about 20 or 30 years it will become 2.5 billion people," President El-Sisi said, emphasizing that Africa is a big market with a future.

"The future belongs to Africa," President El-Sisi said, "where 60 to 65% of its population is youth, if not more, which represents a great opportunity."

The President expressed his gratitude and thanks in his and all Egyptians' names to Professor Harvey James Alter, and manufacturers of the drug and other medicines.

The President added, "Capabilities in Egypt are available to brothers, and government members are well aware of the degree of appreciation and human respect for everyone who suffers, not only in Africa but throughout the world."

The President continued, "Egyptian resources are not vast, but what we have is available to our sister countries in the form of participation, training, teaching, treatment, exchanging or transferring experience in all fields, including the pharmaceutical industry."

In collaboration with the AU, President El-Sisi launched an initiative to provide 30 million coronavirus vaccine doses to brothers in African countries.

He also said that Africa had resources in all areas, from human resources to other resources.

The President explained that the problem is always a lack of resources and a scarcity of funds allocated, stating Egypt's experience in providing world-class medical care to 100 million citizens. "Despite our limited economic resources, we provided a medical service that embodied what this word means."

The President added, "We have not been frustrated by a lack of capacity as there has never been an impediment or challenge to the unwavering determination to overcome this challenge ", noting that scientists and giant pharmaceutical companies have succeeded by working, insisting, striving, rather than wishing.

The President continued, "Many issues have been resolved through initiatives such as the 100 Million Seha (100 Million Healthy Lives) and the C Virus Initiative, all of which focused on specific challenges that needed to be overcome in order for us to move forward. This is in addition to waiting lists that do not include standard medical treatment but rather extensive medical treatment such as major brain, nerve, heart, and joint surgeries."

"We are aiming to end the waiting lists," he added, noting that the target of reducing the number of patients on these lists, which were previously large, has been met. He also stated that more developed countries with greater economic capabilities than ours were unable to do so.

"We're talking about 1.3 million large operations, each costing between EGP 100 thousand and EGP 300 thousand, and could cost up to EGP 400 thousand," the President continued. The amount of money may increase depending on the operation, including member transfers." He also stated that he directed Dr. Khaled Abdul Ghafar, Acting Minister of Health and Population, and Minister of Higher Education and Scientific Research, to the need to shorten the waiting period of 3 weeks to much less in order to alleviate the suffering of patients on waiting lists," emphasizing that "any patient who requires major surgery is treated and the needed operation is performed as soon as possible after medical examinations."

President El-Sisi emphasized that Egypt's goal is to complete the comprehensive medical insurance system in 10 years and not 15 years, as previously estimated, in order to provide outstanding medical services to citizens and avoid delay on this important matter. He stressed that the system has been launched and implemented in five governorates so far, and that a comprehensive medical insurance program for all Egyptians will be in place in ten years.

"We face many challenges, but they have not frightened or frustrated us," President El-Sisi said, noting that Egypt has nearly 2.5 million births per year and 500 thousand deaths, implying that approximately 2 million people require approximately 4,000 beds at a cost of approximately $ 2.5 billion per year for health, and asking, "Does this frighten us?" The President responded, saying, "Obviously not. We will continue to work and, God willing, overcome challenges."

President El-Sisi emphasized that he targeted specific diseases during the initiatives he launched, and that if we cannot do everything, we do parts of it, and we have experience in each sector.

"I have listened to the Vice-President of Zimbabwe's statement during which he spoke about water," the President continued, noting in this context that Egypt's share of water is 55 billion cubic meters, which has not changed over the years since Egypt's population was between 3 and 4 million, and asking: Is it because of this that we got into wars with our brothers to increase this quota? "No, we did not engage in wars," he replied, "but we worked to maximize our resources." The challenge is an opportunity that must not be an obstacle to us. In Egypt, we have developed three water treatment programs to ensure that Egyptians all over the country have access to safe drinking water that meets WHO standards.

He added, "We will be the first or second nation in the world to maximize and benefit from water treatments and desalination for the benefit of its people and Africa is able to meet and overcome the challenges whenever they exist."

President El-Sisi has warned that achieving stability and security is the first step towards real development.

"When I said stability and security are human rights, a lot of people were confused because we are talking about it in many of our African countries, including Egypt. If there is no stability and security, companies will not invest in a country that may be destroyed or subverted, and therefore there will be no infrastructure for the country and will continue to engage in an endless cycle of crises with which people will continue to suffer. "

President El-Sisi welcomed the guests of the conference in Egypt, saying, "I welcome you and I am pleased with your presence in our country Egypt, and I hope you have an opportunity to see the Egyptian monuments."

President El-Sisi referred to the experience of “The Egyptian Authority for Unified Procurement in Egypt (UPA), saying, "It is an experience that we have benefited greatly from through a body responsible for all the supplies we buy from the external or local market, specifically medicines, and we have been able to achieve this in all items imported by the state. It enables us to offer better terms for the purchase of supplies, whether medicines or devices and equipment, through institutional work. "If we can achieve this on the African continent's level, we will be in another better region, and the cost of treatment on the African continent will decrease by 30 to 50% from the cost of purchasing medicines, and this is Egypt's experience that we present to you," he said.