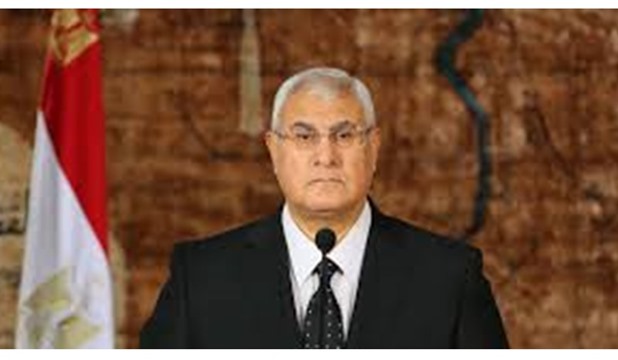 Your Majesty, Highness, Excellence
Ladies and gentlemen;
After almost one year of taking over the presidency of Egypt, I stand before you today after handing over the responsibility of the nation to the new president of Egypt. I remember the images of that past year with all their political challenges, economic difficulties and social problems through which we all passed. We have stood up together to several obstacles and what added to our suffering was the cowardly terrorism that targeted the lives of the dearest of our sons and sought tampering with the potentials of the homeland. Even though, all suffering we passed through has never prevented us from implementing the pledges we have undertaken to achieve in an effort to pilot our nation to safety amid high waves and mean attempts to block its march.

This great people have refused but to complete their path and maintain their march. They have sacrificed the lives of the dearest of their sons for the sake of freedom. They have always proved that the nation will remain and will always be of the highest priority. Our great people have teamed up around the statement of July 3rd that was outlined by the national powers in response to an overwhelming popular will. Therefore this statement became the road map for the future of this nation. We have managed together, through the help of Allah, to implement two unique democratic steps of this road map; namely adopting the new constitution and choosing the new president of Egypt. I have full confidence that we will, through the help of Allah, complete the road map and hold the parliamentary elections to consummate the legislative and democratic set-up of this nation and to be able to turn the texts of our constitution into tangible reality. These legislations identify commitments, regulate life and protect freedoms and rights in one nation that includes everybody and spreads confidence and satisfaction in the souls of its sons.

The Egyptian state has proven, through its strong people and ancient institutions, that it is hard to break and that Egypt with all what Allah has endowed her of potentials and bounties, atop of which come its aware and great people, will remain capable and triumphant. It will remain capable of maintaining its security and the security of its Arab region. It will remain triumphant over any party that seeks harming it and seeks dividing its region and reformulating it in a way that contradicts our national interests.

I extend all appreciation and gratitude to every Arab brother and every international sincere friend. Our unique Egyptian experiment proved that they were up to the level of responsibility. So, all thanks to the states that supported the Egyptian people's free will in action not in word. I look forward to maintaining their cooperation with Egypt in the coming phase of building in a way that achieves the interests of all our countries and peoples and contributes to enhancing our international stances. I assert that Egypt will never forget those who supported it at times of difficulty and I am sure that we will remain exchanging roles of support and assistance in the future.

As for the new president of Egypt, I tell him the Egyptian people have chosen you in free and fair elections in recognition and appreciation to your nationalistic stances and your role in maintaining this nation's unity and identity. They have chosen you out of their confidence in your ability to provide for them security and safety and to realize their hopes for a better life for them and their sons. Mr. President, I am all confidence that you will be able, through this massive popular support, to achieve the hopes and aspirations of the Egyptian people. I pray to Allah to endow you with wisdom and help you take the right decision and to assist you in face of all challenges.

May God's peace and blessing be upon you all.