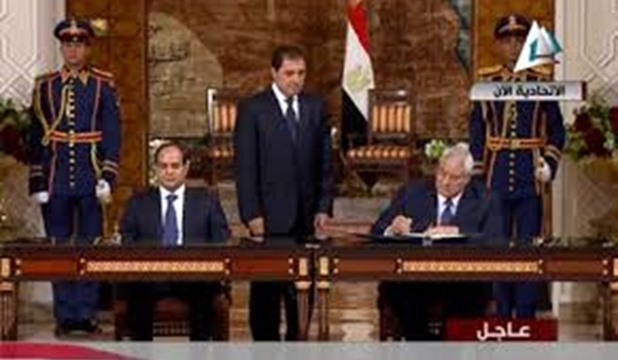 President Abdel Fattah El Sisi hosted a lunch at the Presidential Palace of Ittihadiya in the east Cairo district of Heliopolis in honor of guests who attended his inauguration ceremony.

Attending the luncheon were Crown Prince of Saudi Arabia Vice Custodian of the Two Holy Mosques Prince Salman bin Abdul Aziz, Emir of Kuwait Sheikh Sabah Al-Ahmad Al-Jaber Al-Sabah, Crown Prince of Abu Dhabi Sheikh Mohammed bin Zayed Al Nahyan, Bahraini King Hamad bin Isa Al Khalifa and Jordan's King Abdullah II and the personal envoy of Sultan Qaboos bin Said of Oman plus Palestinian President Mahmoud Abbas, the President of Somalia and the vice-presidents of Iraq, Comoros and Sudan and Lebanese Parliament Speaker Nabih Berri, the head of the National People in Algeria , and vice president of the National Congress of Libya in addition to the foreign ministers of the United Arab Emirates, Oman, Mauritania, Tunisia, and Morocco, and the Minister of Islamic Affairs and Endowments of the Republic of Djibouti, and the Secretary General of the Organization of Islamic Cooperation and the Secretary General of the Gulf Cooperation Council, and director of political affairs and media of the Arab Maghreb Union.

Attending at the African level were the heads of the republics of Equatorial Guinea, Chad, Eritrea and Mali and the vice president of South Sudan and the prime ministers of Swaziland and Liberia plus the president of the House of Representatives in Gabon and the ministers of foreign affairs of Senegal, Ethiopia, Nigeria, Madagascar, Guinea-Bissau, Angola, Burundi, Gambia, Tanzania and Uganda, the Democratic Republic of Congo and Benin, and the minister of presidential affairs South African, and the minister of agriculture as representative of the Togolese president as well as the head of Pan-African Parliament, and the Commissioner of Political Affairs of the AU, a representative of the head of the African Union Commission and the Secretary General of COMESA.

At the international level, attending were the Cypriot president the speaker of the Russian parliament the deputy premier and foreign minister of Greece (the current president of the European Union), and the President of the IPU, and the Under-Secretary General of the United Nations plus the minister of information technology industry of China, and the Iranian deputy foreign minister for Middle East affairs as well as the adviser to the U.S. Secretary of State.

The ceremony began by playing the national anthem, then the recitation of verses from the Quran, followed by a short speech by former president Adly Mansour and then an address to the nation by President Sisi.