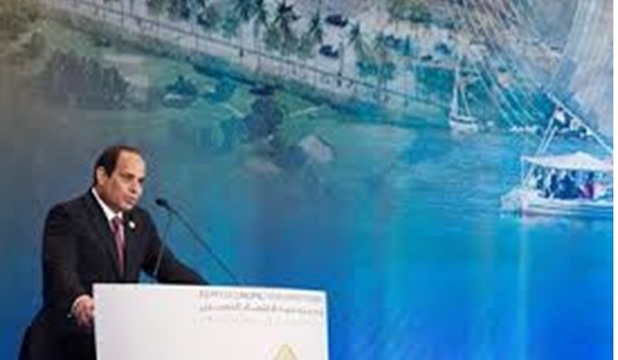 In his speech at the closing session of Egypt Economic Development Conference (EEDC) that was held in the Red Sea resort city of Sharm El-Sheikh on March 13-15, President Abdel Fattah El Sisi thanked all participants for taking part in the major international event.

At the outset of his speech the president said that he could not address the closing session without having the young organizers of the conference next to him on the podium.

Delivering his speech, the president said "I would like to talk about my country as some people thought that my country had passed away. But no, Egypt is a country that was created by Allah to live", he asserted.

"Egypt existed 7,000 years ago and taught the whole world and presented to it its civilization", Sisi said, adding that all this is documented in history books and started to be taught abroad only 150 years ago.

Sisi boasted that a mission from a major country; namely, Japan, came to stand on Egypt's experiment. President Sisi added that "what is today a great country sent a delegation to Egypt in 1962 to learn from us. It was Korea".

"I will not ask why Egypt did not maintain its march at that time, but I would rather remind myself, the Egyptians and the world that Egypt is waking up now", he said. Long Live Egypt with its people and its youths, said the president, adding that Egypt is rich with its more than 35 million youths.

"Egypt with its people taught the whole world before and it will teach the world once again", said the president adding that Egypt will never die. Egypt has waked up, the president asserted.

He added that time element is very important.  "We need to complete the proposed projects soon. We have talked with the company that will take over building the new capital. The first phase of the project was supposed to take 10 years but I refused that the project takes all that time given the fact that by then our population would have increased by 26 million people", added the president.

Sisi said he spoke yesterday with the head of German engineering company Siemens on the possibility of establishing a 4,200-mw power station within 30 or 36 months, adding that he asked the company to shorten the period to 18 months.

The company said it will be a huge challenge but a manageable one, the president said.

Sisi said he was telling this story precisely to Egyptian investors and international partners to drive home  a message that if they would like to seriously contribute to the development of Egypt they should work day and night.

The president also urged the investors to consider the financial cost of the projects and reduce the profit margin “for the sake of Egypt”.

Sisi said when he discussed with Siemens the financial cost of the project, it offered a figure which he asked to be cut down and the company agreed. "We would like to build our country and give a real hope to our people", said the president, adding that in order to achieve this goal we should do everything, provided that it is legitimate, to accomplish our aspirations", he added.

The president thanked Siemens company for accepting his proposal, noting that they have adopted this stance for the sake of Egypt not for anybody else.

He added that he asked the company if they could build three power stations in Egypt to generate up to 13,200 megawatt to be added to the national power grid within a period of 18 months.

"I asked General Electric Company to raise the efficiency of power stations within eight months only instead of 24 months and they approved," Sisi said. As for the financial cost of the project, the president said, they have approved to cut down 100 million euros out of the total cost. He explained that the German government is financing the projects of the two companies at around six billion euros.

He underlined in this regard the possibility that other countries would follow suit and finance projects in Egypt that are implemented by companies from these countries. He further added that the interest rate offered by the company was so great. "Egypt will never forget those who supported it", the president pointed out, noting that the grace period for paying back has also been extended to be 12 years.

Egypt, said the president, needs from 200 to 300 billion dollars so that the 90 million Egyptian would have real hope.

President Sisi urged developed European and American countries and China to consider contributing this way to projects in Egypt where companies from these countries would implement projects in Egypt through  funding that could be paid back in the long-run. Sisi asserted in this regard that Egypt’s financial commitment to investors is “indisputable”.

The President said he received an invitation from German chancellor Angela Merkel to visit the country. “I was looking forward to visiting Germany because I respect its struggle, discipline and development”, Sisi said.

President Sisi paid tribute to late Saudi King Abdullah bin Abdel Aziz, who had called for holding the conference. The Egyptian leader said the conference will be held every year not just for Egypt but as an economic gathering for countries going through hardships, inviting all companies and investors to the event next year.

He noted that Sharm El-Sheikh is a charming city but next year when the conference would convene there will be much development in roads, bridges and buildings. He added that the conference will be an annual gathering and "We will start preparations for it in a good manner not only for Egypt but also for several countries and to offer opportunities for investors to do business".

The president explained that much achievements have been accomplished but needs are too much as well. This is why these achievements are not noticeable so far, said the president, adding that "We are talking about new Ismailia, new Rafah and Al-Alamein city along with Al-Galala Al-Baharia and the reclamation of one million feddans and the new governorates". All these projects need much funds and hard work from everybody, added the president.

He addressed the Egyptian people, "the people who attended the conference came for your own sake and their response for cooperation with Egypt was a message to the whole world and to you also. We should work with them and enhance our cooperation at the local level. I have told you before that this conference is the arm of Egypt but the whole body should work as well to support that arm. We should all work for Egypt", added the president. "Thank you once again for my part and on behalf of the Egyptian people", he concluded.