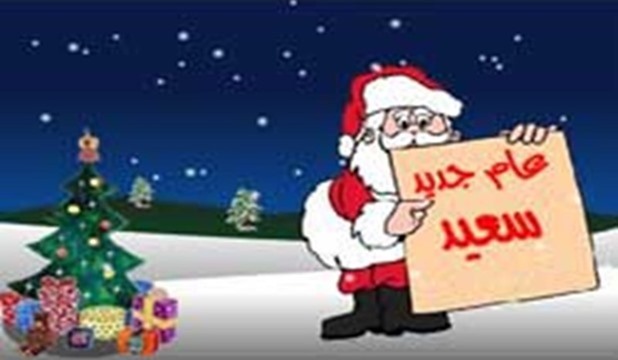 In December 2002, January 7 was considered an  official holiday for Christians and Muslims alike.
Egyptian Orthodox Christians Copts celebrate the birth of Jesus Christ on January 7th, a date equivalent to the 29th day of the Coptic month of "kiohk, or Khiahk". Of course, in many Western countries Christmas is celebrated on December 25th, yet, the Russian Orthodox Church also celebrates Christmas on January 7th. The difference in the dates between the West and East comes from the difference between the Coptic and Gregorian calendars. However, because of the time the Holy Family spent in Egypt with the infant Jesus, Christmas is a very special celebration in Egypt. There is a festive atmosphere that prevails around this time of year, even though Egypt is mostly an Islamic country. There are specialized Christmas stores along 26th of July Street in Zamalek, with belly dancing Santas in the windows, and all over the streets of Cairo were vendors selling Santa hats with blinking lights. Throughout Egypt, Christmas lights and other displays were everywhere. Like the West, homes are decorated with lights and Christmas trees. Some Christmas trees are real, but many are artificial. One will even find Christmas trees in Coptic operated businesses. In Egypt, Copts have their own Pope who is the head of the Coptic churches of Egypt. Copts consider St. Mark to be their first Pope. He introduced Christianity to Egypt. For hundreds of years Alexandria, the second city of Egypt, was the home of the Pope but today his cathedral is in Cairo. Nowadays, the Coptic Nativity is celebrated by a special midnight service in the church, followed by the ringing of the church's bells. The largest service is held by the Coptic Pope in Saint Mark's cathedral in Cairo. This service, usually conducted by the Pope at the 11:00 PM services, is even broadcast on Egyptian TV. After the service, families go home to break their fast and children receive new clothes and gifts. The meal is called fatta, and usually consists of meat and rice. Copts also make special sweet biscuits at Nativity that are decorated with a cross. In fact, it's the same "kahk" that Muslims make for Eid el fitr. Whether Egyptians are Muslims or Christians, their way in celebration is the same. Coptic Fasting

All Coptic feasts come after a period of fasting. A Coptic fasting means going without food completely for a part of the day, according to one's strength. For the rest of the day, only food which has no animal products may be eaten: meat, fish, eggs and milk are forbidden.

Egyptian Orthodox Christians (Copts) celebrate the birth of Jesus Christ on 7 January. This date corresponds the 29th day of the Coptic month of Kiahk. In many other countries, Christmas is celebrated on the 25th of December.

With the advent of Islam to Egypt, Christians continued celebrating the Nativity. The Nativity became one of the main festivals celebrated by Christians and Muslims alike. The Caliph used to distribute special trays of food , especially dishes of "Bouri" (mullet fish) and "Zalabya" (doughnuts).

Churches during the Nativity have always been decorated with special candles and lamps. It is believed that the candles are in memory of Joseph the Carpenter, who lit candles to protect Mary from the cold on the night of the Nativity.

For many centuries, Nativity was celebrated by performances in the streets and by fire-works. In the Mameluk times, lanterns decorated the streets; and candles were everywhere, sometimes in the form of small statues. Nowadays Coptic Nativity is celebrated by a special midnight service in the church. The biggest service is held by the Coptic Pope in Saint Mark's Cathedral in Cairo. After the service, families go home to break their fasting. Children receive new clothes and gifts. Copts also make special sweet biscuits at Nativity, which is the same "Kahk, Sugar-coated cookies" as the Muslims make for Eid El-Fitr (lesser Bairam).

In the Egyptian Coptic Church, special bread called "Qurban" is given to special persons after the service in the church. "Qurban" bread is decorated with a cross in the middle, surrounded by twelve dots. The dots represent the twelve apostles of Jesus. Christmas Otherwise Christmas in Egypt is not limited to the Copts. Certainly there are, though limited, a number of other Christian sects in Egypt, some of whom celebrate Christmas on the same day as in the West. However, Westerners themselves have a long tradition of spending Christmas in Egypt, and more than a few hotels and other facilities cater to western style Christmas affairs. This all started back in the grand old days of Egyptian travel during the late 19th and early 20th centuries, when many wealthy Europeans would winter in Egypt. Then, wonderful establishments such a the Mena House would "dress" for Christmas, when the whole ground floor was turned into a winter scene with artificial snow and frosted trees and plants. Log fires would burn merrily in the many fireplaces, while elegantly dressed women, their escorts in full evening dress or splendid uniforms, would continue to arrive until late in the evening. Today, the Christmas season remains high season in Egypt, a difficult time to find a room at many of the finer hotels, and between the westerners and the Copts, one can enjoy a rather extended "Christmas season". Christmas the Cairo way

Have you bought your Christmas tree yet? What about the decorations? Bells, ornaments, candles, flashing lights? If you haven't yet, then you've got something to look forward to. Here is bit of advice about a place where you can find everything you need and even more at very reasonable prices. Darb el-Barabra is a Cairo street market that specialises in Christmas trees and their associated decorations. The market, only about 10 minutes' walk from el-Ataba Square, also sells artificial plants, flowers and candles. The market in this narrow street is typically Egyptian, as it's full of life and noise virtually 24 hours a day. "The trees are the most popular things we sell," says Mohamed, a vendor. "The price depends on the size of the trees. The smallest are 1m tall, the biggest 2.5m."

The tradition of having Christmas trees dates back to the 16th century. In those days, they were decorated with apples, nuts, biscuits, sweets and candles. It was the invention of electricity in the early 20th century and the use of electrical light that encouraged the tradition to spread all over the world. This beautiful evergreen tree with its blazing coloured lights has become one of the most beloved and well-known symbols related to Christmas. Darb el-Barabra is home to a great variety of artificial trees of different sizes and prices, besides many decorations ranging from Christmas bells to holly wreaths.

Ornaments are also very popular. They come in all manner of shapes and colours - silver, red and gold being particularly popular. "The ornaments start at LE 5," another vendor explains, adding that bells and Santa Clauses are very popular too. Egyptians like to add a personal touch to these foreign traditions, for example you can buy bellydancing Santas and Father Christmas hats with flashing lights.

The merchants in Darb el-Barabra also sell tinsel and ribbons of various colours. The place is full of great ideas. There's lots to buy and it's far cheaper than anywhere else in Egypt. "This is our best season. Many stores here sell Christmas decorations and nothing else at this time of the year," the same vendor adds. I then ask about the opening hours. "We don't close. Some of the shop owners and assistants even sleep in the stores and start working again in the morning!" he says.

Despite Egypt being mostly an Islamic country, the Christmas spirit abounds, not only in Darb el-Barabra, but throughout the nation's districts and streets.