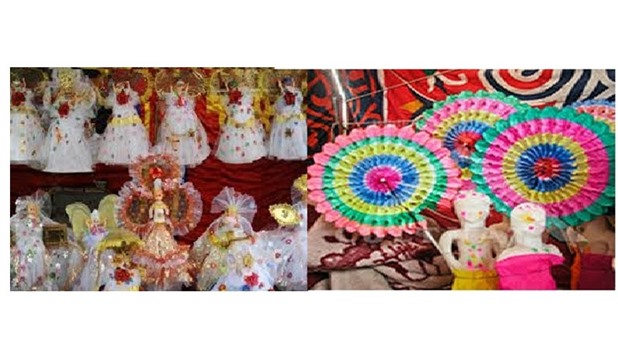 The anniversary of the birthday of Prophet Muhammad (PBUH) is one of the most important Islamic celebrations in Egypt and the Arab and Islamic nations at large. Egyptians celebrate the birth of Prophet Muhammad (Mawled) on the 12th of the Hegira month of Rabee'a al Awwal. This occasion is of an utmost vitality and joy at all popular levels.

Egyptians have been famous for their keenness on celebrating religious events. Celebrations of Prophet Muhammad's birthday (Mawled) took place in Egypt with the entry of the Fatimids rulers to Egypt. The first celebration has been held in the reign of the Fatimid Caliph Al Mu'ezz  ledeen Allah in 973 AH.

Aspects of celebration of the Prophet's birthday did not change especially in rural areas and slums in major cities.

With the beginning of Rabee'a al Awwal each year, large marquees are set around major mosques like the mosque of Imam Hussein and al Sayyeda  Zainab.  Those canvas or canopies house visitors from different villages of Egypt and street vendors shooting games, candy and food sellers and a primitive circus including some games, acrobatics and a corner for singers who are specialized in praising Prophet Muhammad.

The Prophet's birthday candies make one of the features distinguishing that day where candy shops sell different kinds of sweets manufactured especially for this occasion.

Some candies are made in the shape of children toys such as the doll for girls and the horse for boys and the children used to eat them just after the end of the celebration, which is a source of great joy and excitement for children over ages since the Fatimids as they were the first to make these candy-shape toys.

It is made from sugar in the form of inflated candy outlined with dyes, and her hands to her waist are adorned with colorful fans attached to her back and is decorated with gorgeous ornaments and the dress is smothered with roses. Also other candies take the shape of animals like the horse and the camel.

Nowadays, the doll of the Prophet's Birthday (Mawled) is made of plastic and decorated with colored and transparent cloth and fans; it is more practical and harder as before and a durable toy since it is no more eaten as in the past.

2.  The stage of linking the molds and soaking them in water, where the wooden molds are tied with thread of linen. The temperature of the mold helps to freeze sugar quickly. After the soaking process, they transfer molds and vacuum tip open up.

4.  The stage of pouring sugar in molds and leaving them for 10 minutes until sugar freezes.

5.  The stage of opening the molds.

6.  The stage of decorating Aroset El Moled. This stage is divided to several phases; dressing, make-up, putting fans and Roses"