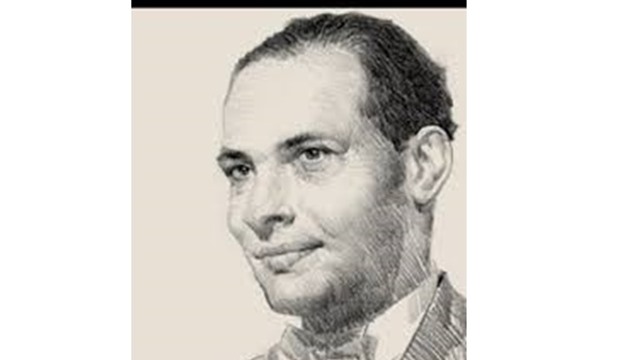 Dr. Gamal Hemdan was not merely an eminent geographer, but indeed a unique example of the serious and fully dedicated academician and scholar.

An encyclopedic intellectual of a rare caliber, Dr. Hemdan invested his wealth of knowledge in the service of a broad spectrum of social sciences, alonge with his major specialty: geography.

His works had a far-reaching impact on the entire field of social sciences that was almost tantamount to a revolution in geography. With a unique literary style of his own, Dr. Hemdan turned the science of geography into a universal, encyclopedic social science. Taking geography as an access road to other branches, he skillfully used this multi-disciplinary approach to study Egypt's location, history, culture and future.

Birth:
Hemdan was born in the Qalyoubia Governarate on Feb. 2, 1928. His father, a teacher of Arabic, had been discharged from Al Azhar educational institution on charges of participating in demonstrations of the Egyptian Revolution of 1919.


At the age of eight, he joined the primary school. He then moved to the prestigious Tawfiqiyya secondary school, which had a nationwide fame for its high educational standards and sports facilities. There, he became aware of his love and innate talent for geography.

Having completed his secondary education in 1944, with distinction, ranking sixth on the list of graduates nationwide, he joined the Department of Geography at the Cairo University, Faculty of Arts. At the age of twenty, he obtained his B.A with Distinction.He was soon appointed a staff member at the Faculty of Arts, where he was granted a scholarship in the UK to obtain his MA and PhD degrees .There, he was a student of the eminent Enghlish geographer, Professor Austen Miller.


Hemdan's M.A thesis entitled “Population of the Nile Mid Delta; Past and Present" was highly commended by his professor. He believed that the thesis was eligible to a PhD. In 1951, Hemdan returned to Egypt to collect his scientific data.

In 1953, he obtained his PhD , he was appointed teacher at the Department of Geography, Faculty of Arts, Cairo University. Upon his return, Hemdan realized that many changes were taking place in the Egyptian society, following the 1952 Revolution.

He preferred to withdraw, in silence from public life and willingly abandoned his academic career. Although Hemdan lived, physically, in voluntary almost hermit-like seclusion, yet he was most productive as a thinker and scholar. Apparently, this self-imposed positive solitude provided him with the right atmosphere for unceasing, uninterrupted and free meditation, research and innovation.

He thought of geography both as a science, art and philosophy. He advocated what he called “Living Geography”; i.e. every day geography. If adequately defined, the pattern, nature, conditions and laws relating to life in that place will be thoroughly identified.

Hemdan's natural talent for painting and calligraphy and his liking of music and singing were instrumental to his exceptional excellence in geography.

Hemdan's outstanding intellectual and geographical achievements constituted the most important accomplishment of the Egyptian geographical school, that stresses Egypt's uniqueness in terms of time and place, of geography and history. In his works, he adopted a multi-disciplinary approach, encompassing geography, history, sociology, politics and culture.

Hemdan left behind a rich legacy of writings in both Arabic and English, including seventeen books in Arabic and eight in English, in addition to several articles in Arabic, published in newspapers, magazines and other publications.

He had a futuristic outlook in his writings. He predicted several events, which, he thought, were compatible or incompatible with the facts of geography. Chief of these was his prediction of the disintegration of the Soviet Union.

His encyclopedic work: "The Personality of Egypt", the most outstanding of his intellectual achievements, was the product of ten years of dedicated efforts, during which time he used 245 Arabic and 691 foreign reference books in several languages.

In this prestigious book, he elaborately expounded the constituent factors making-up the Egyptian personality since the early days of the Pharaohs. To him, Egypt was the central chapter of the book of geography, which turned into the opening chapter of the book of history, maintaining all through a coherent civilization across history. Egypt, to Hemdan was a unique non-repetitive geographical phenomenon. Apart from the “Description of Egypt”, which appeared in print during the French Expedition to Egypt, Hemdan's book "The Personality of Egypt" remains an unprecedented scientific masterpiece on Egypt.

Awards:
State Incentive Prize in Arts and Letters, 1959 State Prize of Meritin Social Science, 1986 Scientific Criticism Award , by the State of Kuwait, 1986 Order of Merit of the First Class for Science and Arts, 1988

In line with his full dedication to science and his almost ascetic attitude to formalities, he refused to break away from his self-imposed solitude. Apart from the first prize awarded to him in 1959, he would not to receive any other prize.

In April 17, 1993, Dr. Gamal Hemdan died, leaving behind a huge scientific legacy, that would rightly place him as an outstanding landmark in the modern Egyptian enlightening movement .

Arabic Books:
Studies on the Arab World; Cairo, 1958 Patterns of the Environment, Cairo.

1964 Colonization and Liberation in the Arab World, Cairo.

1967 The Strategy of Colonization and Liberation, Cairo.

1978 Introduction to "Cairo" " by Desmond Stewart, translated by Yehya Haqqi.

1971 Between Europe and Asia: A Study in the Geographic Counterparts, Cairo.

1972 The Arab Republic of Libya: A Study in Geopolitics, Cairo.

1973 6th of October War in the International Strategy, Cairo.

1960 Evolution of Irrigation and Agriculture in Egypt A History of Land Use in Arid Regions, Ed . L. Dubley Stamp UNESCO, Paris.

1961 Egypt: The Land and the People, A Guide Book to Geology, 1962 Pattern of Medieval Urbanism in Arab World, Geog. Review.

April 1962: A Political Map of the New Africa, Geog. Review. October 1963 The Four Dimensions of Egypt.