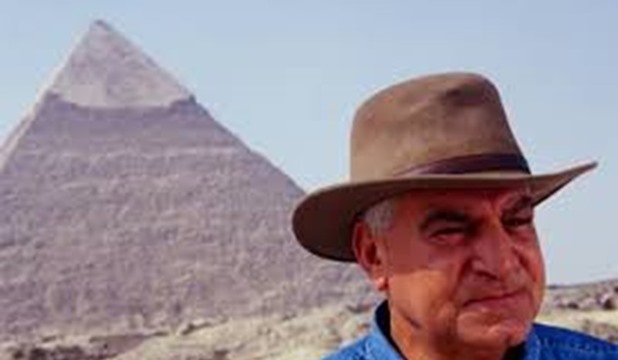 He was appointed Minister of State for Antiquities Affairs, a newly created cabinet post, by Mubarak on January 31, 2011 as part of a cabinet shakeup during the 2011 Egyptian protests.
Former Minister of State for Antiquities Affairs. He has also worked at archaeological sites in the Nile Delta, the Western Desert, and the Upper Nile Valley.
After 1988 Hawass taught Egyptian archaeology, history and culture, mostly at the American University in Cairo and the University of California, Los Angeles. In 1993 he left his position as Chief Inspector of the Giza Pyramid Plateau. According to Hawass, he resigned. In 1998 he was appointed as director of the Giza Plateau. In 2002 he was appointed Secretary General of the Egyptian Supreme Council of Antiquities.
He is also responsible for the discovery of the tombs of Giza pyramid builders, and the Valley of the Golden Mummies in Bahariya. In 2005 as part of the National Geographic Society-sponsored Egyptian Mummy Project to learn more about patterns of disease, health, and mortality in ancient Egypt, he led a team that CT scanned the mummy of King Tutankhamun.
On March 30, 2011, He was once again the Minister of Antiquities. He was reappointed by Prime Minister Essam Sharaf at that time, but resigned on July 17, 2011.
He then began working as a lecturer in Egypt and around the world. In cooperation with the Ministry of Tourism, he promotes Egypt's tourism globally.
He is also a writer of weekly articles in various newspapers and magazines and continues working as an archaeologist and consultant. His website remains a source of information about ancient Egypt.
His Works:
Hawass has written and co-written many books relating to Egyptology, including King Tutankhamun: The Treasures from the Tomb published to coincide with a major exhibition in the UK.
He has also written an article on Tutankhamun in Ancient Egypt magazine, and has written several articles for this bi-monthly UK-based magazine in the past.
He wrote another book and included Tutankhamun curse, called The Curse of the Pharaohs: My Adventures with Mummies.
Hawass is a regular columnist for Egypt Today magazine and the online historical community, Heritage Key. He has narrated several videos on Egyptology, including a series on Tutankhamun.
Awards
Hawass is the recipient of the Egyptian state award of the first degree for his work in the Sphinx restoration project.
In 2002, he was awarded the American Academy of Achievements' Golden Plate and the glass obelisk from US scholars for his efforts to the protection and preservation of Ancient Egyptian monuments.
In 2003, Hawass was given international membership in the Russian Academy for Natural Sciences (RANS), and in 2006, he was chosen as one of the world's 100 most influential people by Time magazine.