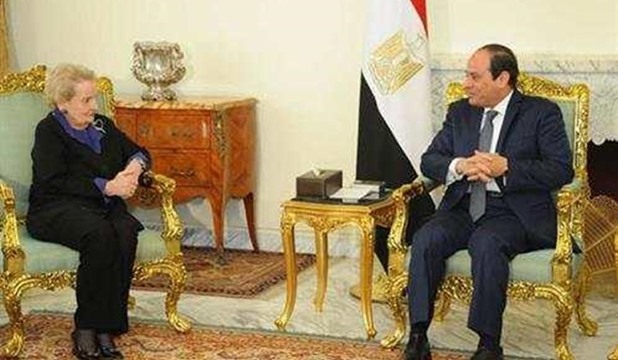 Sisi addressed the current challenges, saying they require the promotion of strategic ties between Egypt and the US, Presidential Spokesman Alaa Youssef said.

The delegation praised the completion of the political roadmap in Egypt with the convention of the new parliament.

It affirmed Egypt’s pivotal role at regional and international arenas as one of the main pillars of peace and stability in the Middle East.

The delegation members said they were keen to visit Cairo to get acquainted with the Egyptian vision regarding challenges facing the Middle East and means to counter them in cooperation with influential and modest countries, mainly Egypt, the spokesman said.


President Sisi reviewed internal developments and pointed out to the completion of the legislative and constitutional structure of the country marking the end of the transitional period and the start of a new phase focused on achieving development and progress at all levels, Youssef said.

Balance has to be achieved between achieving security and stability, and freedoms and rights, the president said.

Sisi also addressed challenges facing the Middle East, especially in Syria, Libya and Yemen, stressing the need to firmly fight the flow of money and weapons to terror organizations and work on reaching political settlements to the conflicts in those countries.

Reaching fair and comprehensive peace between the Israeli and Palestinian sides should remain among the top priorities of the international community, President Sisi added.