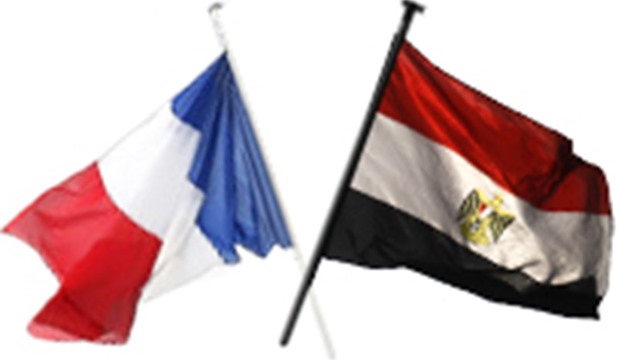 The bilateral relations between Egypt and France are based on the historic  strong ties of friendship and confidence, and they have been developed greatly in all fields.

On the political level, Egypt and France have converging viewpoints on issues like peace process in the Middle East, situation in Lebanon and Sudan, and the Iranian Nuclear program. Both states took converging stances in a number of issues, the most important of which are:

- Calling upon to resume the peace negotiations concerning the  establishment of an independent Palestinian state within 1967 borders, as both countries confirmed the importance of boosting peace negotiations.

- Calling for a political solution for the Syrian crisis, where the two states agreed on applying Geneva declaration on 30 June 2012.

- Calling for a political solution for the Libyan crisis. The two countries launched an initiative that assures their adherence to the unity and safety of the Libyan lands and their engagement in dialogue under the United Nations auspices.

- Boosting cooperation between the two countries to realize peace and security in Sahel and Saharan regions. Both  countries agreed on combating terrorism in the countries lying on the shores of the Mediterranean Sea, and cooperate in the field of exchanging information and training.

The Egyptian-French relations have witnessed a remarkable rapprochement since President Abdel Fattah El Sisi assumed office. The official visits between the two countries, reaching 20 visits since November 2014, reflect the convergence in opinions towards the joint issues of concern, topped by the Palestinian cause, Libyan crisis in addition to the mutual desire to strengthen partnership, going back to two centuries, in the economic, military and cultural fields.

On 13/3/2020, French Foreign Minister Jean-Yves Le Drian has received a message from President Abdel Fattah El Sisi to French President Emmanuel Macron on the latest developments of the Grand Ethiopian Renaissance Dam (GERD). The message was handed over by Foreign Minister Sameh Shoukry at a meeting with Le Drian in Paris. During the meeting, Shoukry called on France and the EU countries to exert more efforts to push Ethiopia into signing the agreement on filling and operating the dam, with the aim of maintaining security and stability in the Horn of Africa region. The two sides discussed ways of fostering bilateral cooperation in different fields, as well as regional and international issues of common concern. The top Egyptian diplomat lauded the distinguished level of cooperation between Cairo and Paris in various areas, asserting that Egypt looks forward to promoting strategic ties with France. The pair agreed on the importance of continuing coordination and consultation in the fight against terrorism, especially in the light of Egypt's great efforts in this regard. Egypt is rely on the support of international partners, including France to join international efforts to confront terrorism and stand against countries that sponsor and finance foreign terrorists. The two foreign ministers exchanged views on means of settling crises in the Middle East, notably the Libyan one. Concerning the Libyan file, the two ministers agreed on the significance of keeping bilateral coordination to resolve the Libyan conflict through promoting the comprehensive political solution, combating terrorism and rejecting foreign interference in the North African country. With regard to the Syrian crisis, Shoukry and Le Drian asserted their commitment to the political settlement in Syria, while preserving the country's unity and territorial integrity. On his part, the French foreign minister expressed his appreciation of the key and central role played by Egypt to strengthen regional stability, underlining the need to elevate the distinct relations between the two countries to higher levels during the coming period.

On 1/3/2020, President Abdel Fattah El Sisi said Egypt desires to develop military and security cooperation with France in the coming period. These remarks came during the president's meeting with visiting French Defense Minister Florence Parly which was attended by Defense Minister Mohamed Zaki and the French ambassador to Egypt. President Sisi asked Parly to convey his greetings to his French counterpart Emmanuel Macron, praising the strength and depth of relations between the two countries and most particularly their close military and security cooperation. Parly pointed out that Paris pays attention to boosting the partnership with Cairo at all levels, including the military and security ones, as Egypt represents a main pillar of security and stability in Africa and the Middle East region. The meeting took up ways of bolstering military cooperation, the current regional developments and joint efforts to reach political settlements for regional crises.

On 29/1/2020: Foreign Minister Sameh Shoukry discussed Wednesday 29/1/2020 with his French counterpart Jean-Yves Le Drian in a phone call US President Donald Trump’s “Deal of the Century” for peace in the Middle East.

During the call, they also reviewed joint action and close coordination between the two countries to push forward peace efforts in the region in the coming period, Foreign Ministry’s spokesman Ahmed Hafez said.

The talks also touched on the Libyan developments and outcomes of Berlin conference on the Libyan crisis, with the two top diplomats reiterating their rejection of any foreign interference into the Libyan affairs and recent remarks made by the French president in this regard.

The ministers agreed on holding a meeting in the near future to boost cooperation and consultations.