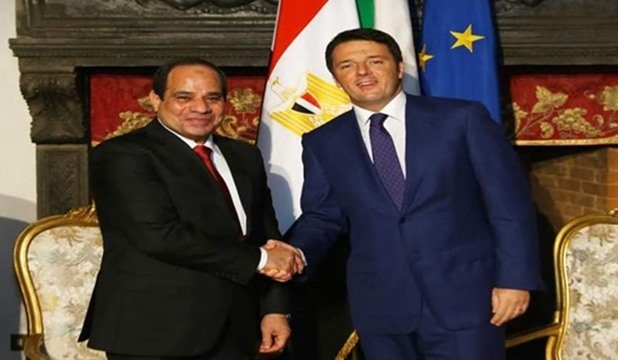 On September 16, 2018, President of the Italian Chamber of Deputies Roberto Fico visited Egypt and stressed with the Speaker of the House of Representatives Ali Abdel Aal the importance of boosting bilateral cooperation in the various fields. Abdel Aal and Fico agreed on enhancing trade cooperation and parliamentary coordination in the various regional and international forums.

On August 4, 2018, Italian Minister of Foreign Affairs Enzo Moavero Milanesi and his accompanying delegation visited Egypt, which was received by President Abdel Fattah El Sisi. During the meeting, Sisi asserted Egypt’s keenness on fostering cooperation with Italy in the different fields, especially the economic, trade and investment ones. He hailed fruitful and constructive cooperation with Italian companies, particularly those working in the petroleum and natural gas sectors.

On July 18, 2018, Italian Deputy Prime Minister and Minister of Interior Matteo Salvini visited Egypt, which was received by President Abdel Fattah El Sisi. The meeting tackled means of boosting bilateral relations, with Sisi asserting Cairo’s keenness to foster cooperation with Rome at all levels and achieve strategic partnership with it. The two sides also exchanged views with regard to a number of regional and international issues of mutual concern, most notably the Libyan file and illegal immigration across the Mediterranean.

On March 20, 2018, An Italian Police delegation visited Egypt to participate in a workshop between the Egyptian and Italian Police in combating illegal immigration crimes and organized crime.

On March 14, 2018, Foreign Minister Sameh Shoukry visited Italy to head the international conference in support of the United Nations Relief and Works Agency for Palestine Refugees (UNRWA) besides foreign ministers of Jordan and Sweden. As Egypt is the current Chairman of the Agency's Advisory Committee.

On December 17, 2017, Italian Interior Minister Marco Minetti visited Egypt , which was received by President Abdel Fattah El Sisi and stressed that Egypt is keen on promoting strategic partnership with Italy at all levels. Minetti, meanwhile, said that the coming period would witness more cooperation between the two countries in the field of combating illegal migration and terrorism.

On November 29, 2017, Foreign Minister Sameh Shoukry visited Italy to participate in the Mediterranean dialogue forum and held a session of talks with his Italian counterpart. The two sides discussed several developments related to the regional situations.

On October 22, 2017, Undersecretary of State for Foreign Affairs, Vincenzo Amendola visited Egypt, where the two sides discussed the Egyptian-Italian relations and means of enhancing it in various fields, as well as discussing regional and international issues of common interest, including developments the situations in Syria, Libya and the Palestinian cause. The two sides also discussed issues related to illegal immigration and international efforts in combating terrorism.