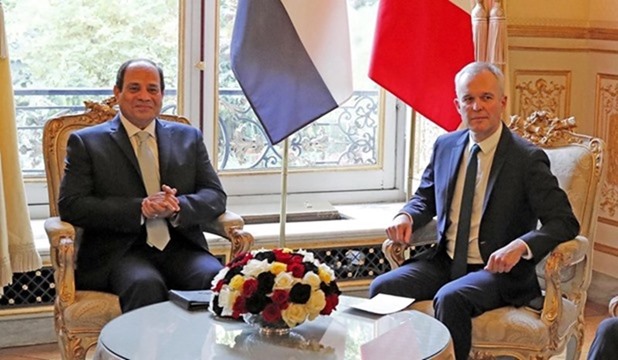 Since outset of the 80s, the economic and trade relations between Egypt and France have been witnessing notable growth. France is considered one of the most important investors in Egypt and one of the significant markets for the Egyptian exporters. The Egyptian-French economic and trade relations are governed by a number of cooperation agreements and protocols; the most important of which is Egyptian-European Association Agreement. The Association Agreement allowed a large number of Egyptian goods to access the EU markets in general and the French market in particular without customs.

Meanwhile, there are 160 French corporations operating on Egyptian soil, employing more than 30,000 Egyptians in all fields.


On October, 26, 2021 Prime Minister Mostafa Madbouly and Matthias Kormann, Secretary-General of the Organization for Economic Cooperation and Development (OECD), signed a memorandum of understanding to launch a 3-year programme between the two parties in Paris.

The Programme will support a structural reform agenda by providing analysis, advice and guidance to inform the design and implementation of policies to help address Egypt’s main economic challenges while moving towards closer alignment with OECD policy standards.

“Such a comprehensive Country Programme can help Egypt to increase its competitiveness and integration in the global economy,” said Prime Minister Madbouly.

“The Country Programme will enable Egypt to advance on its priorities under the second phase of the National Programme for Economic and Social Reform. It will also serve as guidance for the implementation of the recently revised sustainable development strategy Egypt Vision 2030.”

“Today we have taken an important step forward in our collaboration with Egypt,” Secretary-General Cormann said. “As North Africa’s biggest economy and one of the most engaged Middle East and North Africa (MENA) countries in OECD committees, Egypt is an important partner for the OECD. Egypt’s commitment to this programme demonstrates its clear commitment to necessary structural reforms to benefit the Egyptian people.”

Madbouly was accompanied by Egypt’s Ministers of Finance, Planning and Economic Development, International Cooperation, Trade and Industry, Communications and Information Technology, and Electricity and Renewable Energy.

According to the memorandum of understanding signed, the programme envisions 35 projects with a coordination function to ensure that it is implemented and monitored effectively. It is based on five thematic pillars dealing with specific topics.

The first pillar tackled inclusive and sustainable economic growth will address bottlenecks to productivity growth, promote competition in the economy, develop financial markets, and address other priorities to nurture a more competitive and inclusive economy.

Egypt was the only country in the MENA region to see positive GDP growth in 2020 despite the global Covid-19 pandemic. According to the latest projections of Egypt’s Ministry of Planning and Economic Development, real GDP is expected to grow by 3.3% in 2020/21, before reaching 5.6% in 2021/22. Distributing the dividends of such growth is a key priority for the Egyptian government.

While the second pillar focuses on innovation and digital transformation includes projects that will intersect with education policy and human capital development to better take advantage of the digital transformation and promote innovation. Egypt invests 0.72% of GDP in R&D, a third of the OECD average (2.37%). While digital connectivity has improved, significant room for growth remains.

Governance and anti-corruption constitute the third pillar, which will address a series of priority issues such as administrative reforms, better legislation, regulations and institutions, digital government, the rule of law and anti-corruption. Improving governance, strengthening the rule of law and the fight against corruption remains an important priority for Egypt as it aims to promote a greater level playing field for the private sector.

The fourth pillar focuses on statistics, it will aim to improve data in specific themes, including the economy, private sector performance, gender, and trade in value-added. Improving the availability and governance of statistics in Egypt is essential to gather comprehensive evidence, including on the state of the economy, the population, the territory, and the environment.

While the fifth pillar is sustainable development includes projects on strengthening frameworks governing the implementation of the SDGs, as well as promoting green growth, clean energy and quality infrastructure investments. Egypt recently revised its sustainable development strategy Vision 2030 to adapt to the most recent changes in the economy and ensure better alignment with the Sustainable Development Agenda 2030 and the African Union’s Agenda 2063.

All pillars will have a strong focus on gender equality and the inclusion of women and young people in the economy and society, as well as on supporting the formalisation of SMEs. Currently, informality accounts for up to 40% of GDP and unemployment rates for youth and women are among the highest in the MENA region, at 30% and 22% respectively.

The Programme will also support the regional work of the OECD in the MENA region such as the MENA-OECD Initiative on Governance and Competitiveness for Development. As a key partner in this Initiative, Egypt can help disseminate and bring policy perspectives to and from the MENA region.

President Abdel Fattah El-Sisi's visit to France
President Abdel Fattah El-Sisi visited on 27/11/2014 France. President Sisi met members of the Egyptian-French business council and the CEOs of major French companies at the headquarters of the Movement of the Enterprises of France. Sisi delivered a statement during the meeting in which he affirmed that France is considered one of the most important trade partners for Egypt. Sisi also underlined the need of boosting economic ties and increasing the volume of trade between Egypt and France. Sisi also pointed out to the measures taken by the government to improve the investment climate in Egypt, atop of which is the unified investment law. The President invited the French business community to take part in the international economic conference, which will be held in Egypt in March, 2015.

On 26/11/2014: President Abdel Fattah El-Sisi assured representatives of leading French travel companies that Egypt has exerted efforts to restore tourism movement to its previous rates. The President pledged to provide all guarantees for French tourists. The two sides discussed suggestions that could help remove all impediments of increasing tourism investments in Egypt. The French companies suggested easing the travel ban on some destinations in Egypt, especially Sinai's resort of Taba. They further underlined the importance of operating direct flights to tourist destinations in Egypt. A delegation of big French travel companies is expected to visit Egypt in February 2015 to show their interest in restoring French travel to Egypt.

• The French Development Agency embarked on its activities in Egypt in 2006, and opened an office in Cairo in February 2007.
• The volume of the agency's activities increased from €100 million to €125 million within a very short period.

The agency contributes to the funding of a number of development projects, including:

• Combating environmental pollution resulting from the emissions of industrial facilities in Greater Cairo and Alexandria.
• Financing the irrigation grid rehabilitation project in the West Delta.

The following agreements were signed on the sidelines of the French Premier's visit to Egypt on December 23rd, 2008.

• The water supply and purification improvement project in four governorates in the North Delta.
• Supporting the small and medium institutions through a €30 million loan to provide credit lines via a number of commercial banks to offer soft loans to these institutions.
• The Board of Directors approbated the agency's contribution in the tender of the transport service between Cairo airport halls project after the airport's expansion in June 2008.

Egypt and the Union for the Mediterranean:

The First Summit of the Union for the Mediterranean was held on July 13th, 2008, in Paris, and was co-chaired by the Egyptian and French Presidents. The Summit was attended by 43 countries, in addition to a number of regional and international organizations, including the United Nations, the Arab League and the World Bank. The Summit announced the establishment of the Union, which is based on the principles and goals of Barcelona Process, and the achievements accomplished throughout 14 years. The Union aims at promoting cooperation between Mediterranean countries and EU member states, and focusing on the Mediterranean Sea being a connecting link between the neighboring countries in the same geographic region, with mutual interests and seeks to reinforce their positions in forming the world future. This framework is characterized by the application of new principles, the most significant of which are common property and equity among the Mediterranean countries in the management of the Euro-Mediterranean cooperation and giving it momentum at the political level, and implementing specific projects in a number of development fields prioritized in the South Mediterranean countries.

Cooperation Protocol in the field of Electric Networking

Cooperation Agreement on the Protection of Environment