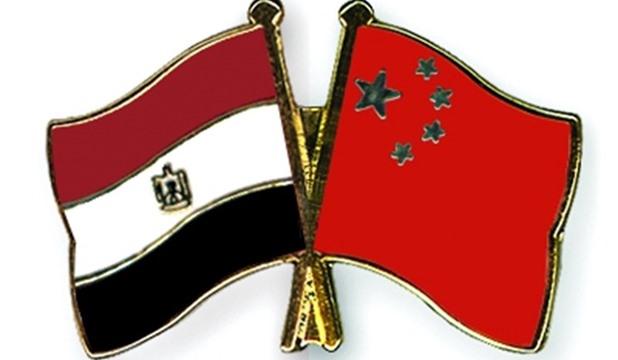 
For instance, the Fuad Muslim Library in China was named after King Fuad 1 of Egypt. Bilateral relations have never stopped since then. Rather, the two sides were keen on promoting these relations to serve the best interest of the two countries.
Importance of relations
China is seeking to benefit from the advantages enjoyed by Egypt, including a huge market, which includes about 90 million consumers. Also, Egypt could be the gateway for Chinese products to several other markets, such as the European Union, COMESA member-states, Arab countries and the United States.
The strategic and political benefits of close relations between Egypt and China include establishing strategic partnership, which will pave the way for more projects to develop Egypt as a major country in the Middle East and North Africa, as well as the establishment of logistical projects and areas for ships services and industries related to maritime transportation along the Suez Canal axis to take advantage of Chinese Silk Road and the New Suez Canal to activate trade with world countries.
Features of Egyptian-Chinese relations strategy
Egyptian-Chinese relations have been progressing in all fields over the past six decades. These relationships have proven their ability to cope up with international, regional and internal developments. The two countries also adopt compatible policies in terms of working for peace in all parts of the world, calling for democratization of international relations and establishing fair and just political and economic world order that is based on mutual respect between countries.
The two countries adhere to the principle of non-interference in the internal affairs of other countries and seek to resolve conflicts through peaceful means. This policy is reflected in the stances towards each other in various international forums, especially regarding regional and international disputes.
Egypt confirms its firm position that there is one State of China which is the People's Republic of China (PRC), while China has adopted a stand in favor of the choice of the Egyptian people during the past five years and has repeatedly declared its rejection of any foreign interference in the Egyptian affairs. We clarify in the following the features of Egyptian-Chinese relations strategy.
1.     Important strategic location of the two countries
China has a strategic location in Asia, with an area of 20% of the area of the total Asian continent, in addition to its joint borders with 14 countries. This makes China a continent country. Meanwhile, Egypt is also located in the north-east of Africa and in the far south-west of Asia. It overlooks the Mediterranean on its northern borders and the Red Sea on its eastern border. The Egyptian Suez Canal is also an important and crucial international waterway.
2.     The large size of population
The number of Egypt's population reached 90 million by the end of 2015, while the Chinese population hit about 1.4 billion in number.
3.     Economic factors
China realized that economic geography is more important than political geography. In 2007, China held the 17th National Conference of the Chinese Communist Party. The conference focused on opening to the outside world. In November 2012, the Chinese Communist Party approved in its conference the amendment of the Party's constitution and introduced the concept of scientific development to coordinate economic and social development in China.
On the other hand, economic problems in Egypt required adopting an active foreign policy to support the national economy and reschedule external debt. Egypt headed towards Asian countries to maximize its exports so as to benefit from Asian capabilities given the relative average of high population rates, high income and high technology, especially in India, China and Japan.
4.     Historical factors
The Chinese Revolution in 1949 confirmed three main objectives; the first goal is nationalism, which was aimed to attain independence from foreign influence, the second goal is unity under a national goal governed by a central authority and third is radical change for economic and social conditions.
When we look closely at the three goals of the Chinese Revolution, we find them identical to the Egyptian 1952 July Revolution goals. Egypt was the first country that announced its recognition of the People's Republic of China in 1953 and in August 1955, the Egyptian minister of industry visited China and signed a trade agreement whereby each side of the two countries set up a commercial office until diplomatic relations were established in May 1956.
Following the decision of late president Gamal Abdel Nasser in July 1956 to nationalize the Suez Canal, China supported the decision in August 1956 and issued a statement condemning the tripartite aggression against Egypt and confirmed its support for the struggle of the Egyptian people in order to protect the Egyptian national independence.
Despite the internal conditions of China since 1966 where chaos prevailed in the country as a result of the Cultural Revolution, China announced its full support for all the stances taken by Egypt in repelling the tripartite aggression.
During the Cultural Revolution, China withdrew all its ambassadors from Arab countries except Egypt; a stance that confirms Egypt's place in the Chinese foreign policy, which appeared in October War in 1973 when China announced its full support for the Egyptian efforts to restore its occupied territories.
5.     Foreign factors
Regional and international factors play a role in the development of relations between the countries, after 2003 when the United States occupied Iraq, imposed its hegemony on the Gulf region and imposed sanctions on Iran and used the human rights file to interfere in China's affairs, Egyptian-Chinese relations were affected by these international and regional developments during the era of former president Hosni Mubarak.
China called for establishing a new world order based on the peaceful coexistence principles, where the first visit of Hu Jintao after taking office in 2004 to Egypt, reflecting the approach of the two countries.
After January 25 Revolution, the Egyptian economy suffered from many problems. Egypt sought to strengthen its relations with other international parties and China was one of the first countries that was visited by ousted president Mohamed Morsi, while President Abdel Fattah El Sisi interested in strengthening relations with China during his two visits to China.