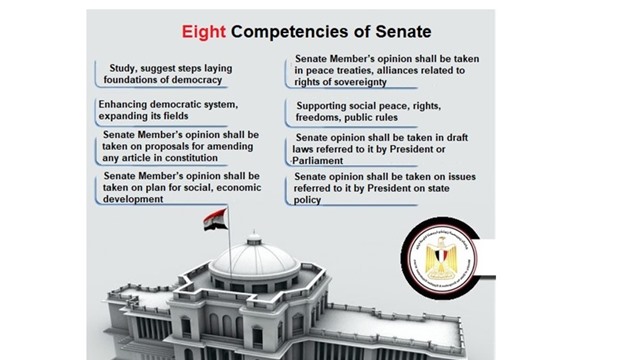 Executive steps for establishing the Senate have been taken to establish the new Egyptian Senate as this type of advisory councils is highly regarded in the esteemed democracies because of the tasks it undertakes and the effective impact it has on countries according to the norms governed by the constitution, customs, traditions and accumulated experiences that its members have.

Accordingly, President Abdel Fattah El-Sisi issued on 2nd July, 2020 the Law No. 141 of the year 2020 for regulating the Senate, based on the recent constitutional amendments to the provisions of the 2014 Constitution issued in 2019. According to these amendments, the legislator has created a new chapter consisting of 7 articles (Articles 248 to 254) that set the constitutional rules for returning the Senate back to Egyptian parliamentary life.
The importance of the second parliament chamber:

The Legislative Affairs Committee of the House of Representatives also considered that the nature of the mixed rule makes it appropriate that the second chamber's function is to be limited to providing consultancy on matters in which the President of the Republic or the House of Representatives asked for its opinion.
The second chamber is concerned with taking the council's opinion on the proposals to amend the articles of the constitution and approve draft laws and their complements as well as treaties relating to sovereign rights or issues related to the general state policies internally and externally like the prevailing trend in constitutional systems that adopt the dual parliamentary system.

Furthermore, the second chamber proved success in many countries that adopted this system, including France, Italy, India, Brazil, Argentina, Canada, South Africa, Australia, Japan, and Switzerland.Upon the recent constitutional amendments, the referendum was held on the return of the second chamber of parliament, which is the "Senate”. The number of member states of the United Nations is 192, and 173 of them depend on the two-chamber parliament system, which contributes to consolidating democratic foundations and supporting intellectual pluralism in these countries.
Increasing societal representation
The Senate guarantees increasing societal representation, expanding participation and receiving the largest number of voters. It will be an important step for developing the general policies of the state and economic and social programs, achieving the legislative process and enacting laws in a better way that includes study, constructive discussion and optimal use of the Egyptian expertise.
Utilization of expertise and competent

After the revolutions, the current parliament received many laws in all areas which should be discussed and ratified. Thus, there was a large number of legislation that was referred to the parliament and should be ratified quickly which represented a burden on its members.

For the first time, the legislator added that obtaining a university certificate is one of the eligible requirement to qualify a candidate for membership in the council. This new condition was not among the previous requirements for candidacy which included only reading and writing ability.

The Egyptian Senate is composed of experts from all fields.  This positive step ensures the need to establish it as an advisory board.

Accordingly, the members of the Council are of various specializations, and they can scrutinize the laws more accurately and professionally, as the Council will bring together several majors.

Regulations of appointing  one-third of the members

In a constructive step, Article No.28 of the new law outlines some of the regulations that should be followed for appointing one-third of the Council members, as follows:

-         It is not allowed to appoint a number of persons belonging to one party in a manner that affects the majority in the parliament.

-         It is not allowed to appoint a member of the political party to which the former president belongs.

This is in addition to the general rules that should be fulfilled in any candidate; such as age, qualification, and performance of military service.