Egypt and Community of Sahel-Saharan States 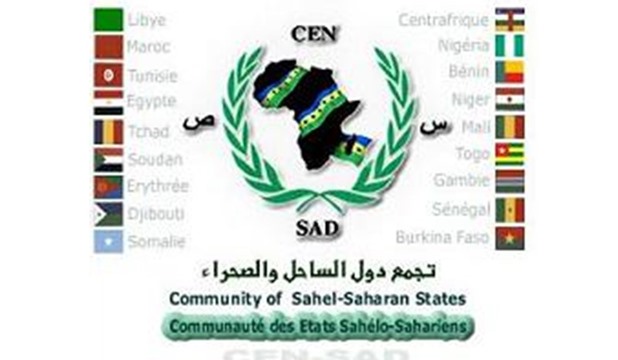 The Community of Sahel-Saharan States CEN-SAD

CEN-SAD was established in February 1998 by six countries, but since then its membership has grown to 27.

One of its main goals is to achieve economic unity through the implementation of the free movement of people and goods in order to make the area occupied by member states a free trade area.

All CEN-SAD member countries are also participating in other African economic unions, that have the aim to create a common African Economic Community.

The envisioned Free Trade Area of CEN-SAD would be hard to practically implement, because it is overlapping with the envisioned customs unions of the Economic Community of West African States (ECOWAS), ECCAS andCOMESA and other trade blocs more advanced in their integration.

Ministers, leadership from Africa convene in Sharm El-Sheikh for collaborative effort against terrorism

The preliminary meetings for the fifth Community of Sahel-Saharan States (CEN-SAD) began on Monday in Sharm El-Sheikh.

The meetings, which are attended by 27 ministers of defense from the Africa Union representing the participating states, in addition to northern Mediterranean countries, such as Spain, Italy, Cyprus, Greece, and France, will continue until the end of this week.

The meeting aims to renew, recreate, and reform the CEN–SAD’s work in the wake of security threats and challenges in the region. This is the first meeting since the Fourth Ministerial Conference in Tripoli, Libya in 2011.

The union aims to face the challenges in the region, with terrorism being among the most prominent issue, the Egyptian ambassador to Libya and permanent representative of Egypt to the African Union, Mohammed Abu Bakr, said.

In the second half of this year, there will be a summit in Morocco for the heads of CEN-SAD member states. The Egyptian representatives will propose the establishment of a council to fight terrorism. They will discuss illegal immigration, smuggling, and border protection issues, Abu Bakr said in a press statement.

Discussion on the establishment of a permanent council for peace and security, and the Council for Sustainable Development will be the most prominent items in the union’s agenda.

The proposals put forward, and the challenges of establishing an anti-terrorism council will be discussed in the leadership’s meeting later this year, the ambassador said.

Secretary-General of CEN-SAD Chadian Ibrahim Sani Abani, said: “The meeting aims to develop mechanisms that will be relied on to fight terrorism by identifying specific measures to address the threat.

Many countries on the continent are threatened by terrorists, and this requires opening the borders between states concerned with increasing surveillance and coordinating together to prevent security breaches that threaten any of the concerned countries.”

The opening ceremony began with a speech by Abani in which he stressed the importance of the meeting, which comes in the wake of difficult circumstances and challenges facing the African continent, CEN-SAD states in particular.

Following further developments of organized crime and cross-border terrorism, which affects development and construction of all people on the continent, this meeting will focus studying legal and institutional texts, which will be presented at the next summit, Abani continued.

The meeting will also focus on the establishment of a protocol for the security and permanent peace council of CEN-SAD states and drafting the rules of procedure of the council.

The conference will address the security strategies and development of CEN-SAD, as well as the possibility of implementing a centre for CEN-SAD to confront terrorism, and to promote and develop military cooperation between the members.

The conference will discuss the extent of the activities, arrangements, and preparations between the union and the GCC countries.

A number of representatives from ministries of defence, ambassadors, and Egypt’s military attaches for CEN-SAD countries attended the opening session.

Minister of Defence Sedki Sobhi presented the “Sharm El-Sheikh Agreement” at the conclusion of the fifth Community of Sahel-Saharan States (CEN-SAD).

The agreement, which has an emphasis on exchanging military experience and knowledge to counter terrorism, included a joint statement from the participating delegations who asserted the need to end conflict and fight extremism in the region.

The member states have agreed on enhancing military, security, and intelligence strategies to combat terrorism, and limit the activities of extremist groups, Sobhi said. In addition to security policies, the agreement stated that economic strategies in CEN-SAD states must be enhanced to limit enrollment in militant groups.

According to the agreement, Egyptian military forces are permitted to participate in border protection with Libya and Sudan, as well as to share military intelligence concerning militant activities. Egypt is also allowed to communicate with countries combating extremist groups, such as Boko Haram in Nigeria, in order to limit, and eventually halt, their activities.

The agreement also vowed to stop any interference in the internal affairs of member states, and to halt activities of rebel groups.

The final joint statement of the CEN-SAD countries entailed that a counter-terrorism centre will be established with its permanent headquarters in Egypt.

After Sobhi finished reading the Sharm El-Sheikh agreement, defence ministers of Tunisia, Guinea, Morocco and other countries spoke about the role of their countries in the fight against terrorism. They praised Egypt’s initiative in organizing this conference and thanked President Abdel Fattah Al-Sisi, who vowed to give 1,000 scholarships to military cadres from member states for training in Egypt.

The sixth round of the CEN-SAD meeting is expected to be held in Ivory Coast, while another conference attended by leadership will be held in Morocco later this year.