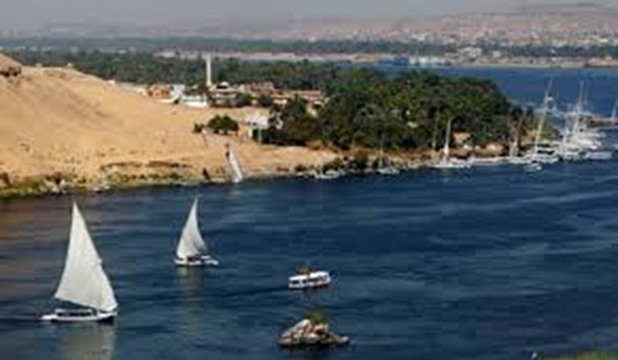 Water constitutes 75% of the human body weight and 80% of the total composition of most vegetables. At the same time, water causes an estimated 80% of diseases in the world. This is either due to water contamination or to water shortage.

Thus, water needs and the development process are inseparable, as human civilization and progress are measured by the quantity of water used per day.

Water is the fundamental element for sustainable and integrated development in Egypt. Horizontal expansion in agriculture is connected to the country's ability to provide the water required for that expansion. Moreover, the economics of water use and its future on the long run require searching for alternatives and determining the water resources available at present and additional resources we can obtain in the future.


Water resources available for use and quantities obtained at present and in the future:

The River Nile is the longest river on Earth, flowing for nearly 6,700 kilometers from its source to its mouth. The river water yield is about 1,630 billion cubic meters (BCM) per annum, of which only 10 percent are exploited. The length of River Nile in Egypt is 1,530 km and the area of the River Nile Basin is 1.3 million square meters. The Basin spreads over ten countries: Rwanda, Burundi, the Democratic Republic of Congo, Tanzania, Kenya, Uganda, Ethiopia, Eritrea, Sudan and Egypt. The volume of water resources in Egypt amounts to approximately 69.7 (BCM) per annum, used for all purposes. River Nile constitutes more than 95% of Egypt's total water resources. Egypt's share of Nile water is 55.5 (BCM).


Due to the establishment of the High Dam in 1964 and the use of its large capacity in continuous water storage, Egypt secured obtaining fixed annual water yield.


Reservoir and barrage projects on the River Nile

There are 11 main barrages on the River Nile and its two branches, 17 mouth barrages, that convey water directly from the Nile, and 37 stone barrages built across the main canals. The length of waterways that supply Egypt with water is about 35,000 km.

Egypt set out an important strategy to develop irrigation programs as follows:

Egypt has achieved the following:

• Projects of water quality improvement in Lake Manzala as well as the Damietta and Rosetta branches of the Nile
• Installation of five sanitary disposal stations for Nile cruises along the river's course in Cairo, Minya, Assiut and Sohag
• Conducting a study of an empirical contamination abatement project in Bahr el Baqar drain in Manzala Lagoon
• The establishment of a center for combating marine pollution in Sharm el-Sheikh

Underground water is an important source of fresh water in Egypt; its importance is augmented by the fact that it is the sole and essential source of water in the Egyptian desert that constitutes 95% of Egypt's total area. Underground water can be used directly without treatment as it is not exposed to pollution, in addition to its constant temperature over the year. Thus, it is a safe source for potable water.

Rain falls on Egypt rarely. So, rain remains a limited and unreliable source in agricultural development, but can continue to play a role in pasture cultivation in desert areas and irrigation in the North Coast.

Egypt always stresses the importance of water in socio-economic development in Africa, as well as its uses in agriculture, navigation and power generation via a policy of water usage appropriate for the Nile Basin countries. Egypt also emphasizes the importance of boosting regional and international cooperation as well as developing irrigation techniques in Africa, with regional and international participation.

Egypt supports the establishment of water and agricultural projects in the Nile Basin countries in addition to means of developing the River Nile waters, preserving the environment and setting a new mechanism to enable those countries to develop the Nile resources.

It aims to prevent wasting water in the swamps of this area, due to evaporation. However the project stopped because of the security situation in the region.

It aims to collect the lost water from Mashar swamps and Sobat River.

It is a great swamp where water moves slowly, thus leading to the loss of great amount by evaporation. Bahr el Ghazal's total area is 521 square kilometers. This project depends on digging a canal to collect water in the northern part of Bahr al- Ghazal and convey it to the White Nile.

It also aims at digging a canal to collect the river water in the south of Bahr al- Ghazal, and divert them eastward to Bahr al-Jabal at Chambi Village. The quantity of disbursed water in northern and southern regions is 12 (BCM) per annum.

As the July 23, 1952 Revolution took place, Egypt has taken its first steps on the path of giant irrigation projects of which the High Dam was the greatest construction project implemented over the last century and throughout the Egyptian history. It is a turning point in Egypt's agricultural history and the beginning of the modern Egyptian industry. Since the beginning of water storage in High Dam Lake (Lake Nasser) in 1964, this giant project has succeeded in regulating the River Nile water and in controlling their flow into the sea. In addition to achieving Egypt's water security which contributed to the expansion of agricultural development projects, from 5.2 million feddans in the 1950s to 5.8 million feddans in the 1970s.


Also, Egypt has started several mega national projects. These projects aim at drawing a new urban and production map that achieves parallel development among Egypt's different regions and secures the optimum use of all resources in desert areas that include the same natural elements.

These projects are mainly located in southern Egypt, the Suez Canal region, and Sinai and will contribute to creating new urban communities in the depths of the Egyptian deserts, outside the narrow valley.

Toshka project is designed to create a second Nile Valley in the south of the Western Desert. It adds 540,000 feddans to the cultivated area and is irrigated by Nile water via El-Sheikh Zayed Canal whose quota is around 5.5 billion cubic meters per year. It comprises various economic activities with a total investment cost of around four billion pounds.


East Owainat project, the biggest agricultural development project in the Southern Valley, lies in the southwestern part of Egypt's Western Desert. The project aims to add 230,000 feddans to the cultivated area, irrigated completely by groundwater.

Moreover, clean agricultural techniques are applied to produce pollutant-free (organic) crops for exportation. Scientific methods have been applied in selecting crops, on top of which are: potatoes, medicinal herbs, fruits and grains. The project yields have been promising and are for exportation. Investments in the project are estimated at 3.5 billion pounds.

It is one of the most important mega development projects. It helps add 620,000 feddans to the cultivated area irrigated by a mixture of Nile water and agricultural drainage water. The Canal and its branches extend over a length of 262 km.


First Phase: (West of Suez Canal) as- Salam Canal extends at a length of 87 km from the River Nile till the Suez Canal. It serves 220,000 feddans and passes through five governorates: Damietta, Daqahliya, Sharqiya, Ismailia and Port Said.

Second Phase: (East of the Suez Canal in Sinai) this phase includes establishing as-Salam Lake siphon below the Suez Canal to transfer the Nile water to Sinai. It also includes digging el-Sheikh Jaber Lake in Sinai at a total length of 86.5 km. The total lengths of the lakes and their branches are 175 km and serve an area of 400,000 feddans in Sinai.

It lies near the Gulf of Suez. It consists of a canal that links the main passage route of the Suez Canal to the new port that comprises four basins; each accommodates ships with 130,000 tons capacity.