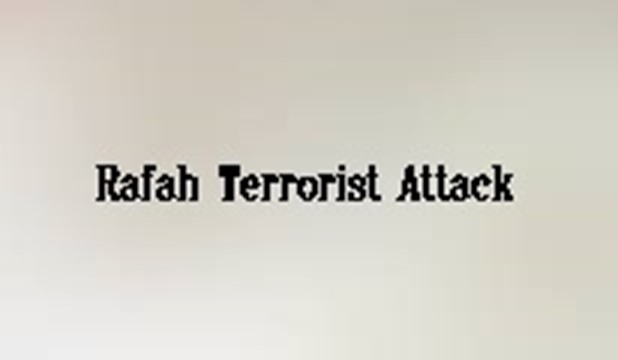 The United Nations Security Council (UNSC) on Saturday denounced a terrorist attack that took place in Rafah on Friday and left several army personnel dead and wounded. In a released statement, the council expressed condolences to the Egyptian government and the families of the victims, wishing speedy recovery for the injured. According to statements by Egyptian Foreign Ministry Spokesman Ahmed Abu Zeid, the statement underlined that terrorism constitutes one of the most dangerous threats facing international peace and security. Also, the statement highlighted the necessity of bringing to justice all those involved in the attack either through organizing, financing or sponsoring, said the spokesman, adding that the statement urged all UNSC members to cooperate with Egypt on this score. (MENA)

The general union of the Egyptian community in France has deplored the terrorist attack that targeted on Friday morning a security checkpoint in Rafah city in North Sinai.  The attack left 26 army personnel dead and wounded. These criminal operations present a clear evidence that Egypt's Armed Forces are "in a fierce war, in which they pay dearly to preserve the homeland," the union said in a statement. The union also emphasized its full solidarity with the army, underlining the necessity of punishing those who support terrorism, whether they are individuals, organizations or countries. (MENA)

King Salman bin Abdel Aziz of Saudi Arabia on Saturday confirmed Saudi support for Egypt and its brotherly people in the face of terrorism. The remark was made in a cable of condolences he sent to Egyptian President Abdel Fattah El Sisi over the victims of Rafah terrorist attack that took place on Friday and left several army servicemen dead and wounded, according to the Saudi Press Agency. He further asserted Saudi support for Egypt in its efforts against anybody who would seek to undermine its stability and security, according to the agency. (MENA)

Arab League Secretary General Ahmed Abul Gheit has strongly condemned a terrorist attack on a military checkpoint south of Rafah city in North Sinai, which left a number of servicemen dead and injured. In a statement on Friday, Abul Gheit stressed his full solidarity with the Egyptian state and the Armed Forces in the fight against terrorist and extremist groups that seek to undermine security and stability of the country. He offered his deep condolences to the leadership, government and people of Egypt. (MENA)

The Czech Foreign Ministry on Saturday denounced Rafah terrorist attack that took place on Friday and left scores of servicemen dead and wounded. In a released statement, that was distributed by the Czech embassy in Cairo, the Czech Republic announced its support for Egypt in its fight against terrorism. It also extended condolences to the families of the victims. (MENA)

The Organisation of Islamic Cooperation (OIC) condemned in the strongest possible terms the terrorist attack that targeted a checkpoint southern the Egyptian Rafah city on Friday, leaving a number of soldiers dead and injured. OIC Secretary-General Yousef al Othaimeen, in a statement a copy of which was obtained by MENA, described the attack as a cowardly and heinous one. He stressed the solidarity of the OIC with the Egyptian government in face of terrorism. Besides extending condolences to the families of the martyrs, Othaimeen underscored OIC's condemnation of all forms of terrorism. (MENA)

Palestinian President Mahmoud Abbas offered his condolences to his Egyptian counterpart Abdel Fattah El Sisi over the victims of Friday's terror attack that targeted a military checkpoints in North Sinai's Rafah city. In a cable of condolences, Abbas offered his sincere condolences to the Egyptian people and the families of the victims, WAFA reported. He deplored the terror attack and pledged Palestine’s support for Egypt in its war on terrorism and its supporters.  He asserted the Egyptian military is capable of protecting Egypt and the Arab world against terrorists and extremists. The president also wished the injured a speedy recovery. Earlier in the day, a booby-trapped vehicle targeted a number of security checkpoints south of Rafah city in North Sinai, leaving 26 servicemen dead and injured. (MENA)

Al Azhar University offered condolences over the martyrs of Rafah terror attack that left scores of servicemen dead and injured. In a statement issued on Saturday, the university hailed the sacrifices of the Armed Forces to defend their nation. The swift retaliation of the Armed Forces sends a strong message to the supporters of terrorism, the university said, adding that such treacherous crimes couldn't undermine the resolve of the Egyptians to uproot terrorism.  The university called on the the Egyptian people to stand united behind their political leadership, Armed Forces and police in face of terrorism. (MENA)

Investment and International Cooperation Minister Sahar Nasr mourned the servicemen who were killed in a terrorist attack in Rafah city in North Sinai earlier on Friday. The minister offered her condolences to the families of the victims and wished a speedy recovery for the injured. The attack will make Egypt more determined to uproot terrorism, she said. (MENA)

Health Minister Ahmed Emad el Din mourned on Friday the army personnel who were killed in a despicable terrorist attack on a security checkpoint in North Sinai's Rafah city. In a statement, the Health Ministry offered its deep condolences to the Egyptian people and the families of the victims. (MENA)