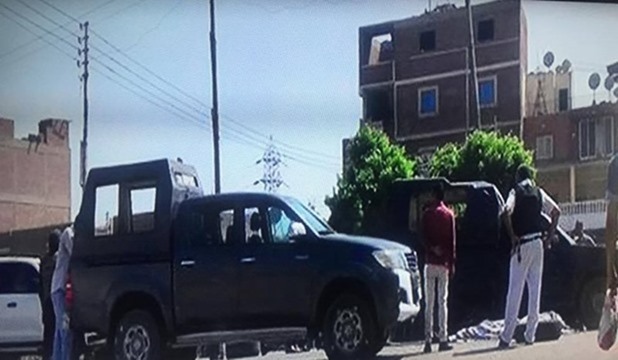 Head of the European Union Delegation to Egypt ambassador Ivan Surkos strongly condemned a terror attack in Badrasheen of Giza. On his twitter page, Surkos deplored the incident against policemen, and reiterated EU solidarity with Egypt in its war against terrorism. Five policemen including an officer were killed after some militants attacked their police vehicle in Badrasheen. (MENA)

The Jordanian government has strongly condemned a terrorist attack on a security checkpoint in Giza's El Badrasheen district, which left five policemen dead. In a statement on Friday, Minister of State for Media Affairs Mohammad Al Momani affirmed his country's full solidarity with Egypt in countering terrorism. He added that such terror acts require concerted efforts by the international community and regional parties to eradicate terrorism that claimed the lives of innocent people. Momani also offered Jordan's warm condolences to the Egyptian government, people and the families of martyrs. (MENA)

The Cabinet on Friday deplored a terrorist attack on a security checkpoint in Giza's El Badrasheen district that killed a number of policemen. In a statement, Prime Minister Sherif Ismail mourned the death of the policemen and conveyed his condolences to their families.  Egypt is determined to fight terrorist and criminal groups, Ismail made it clear. (MENA)

The Education Ministry mourned on Friday the victims of a terrorist attack on a security checkpoint in El Badrasheen area of Giza governorate. In press statements, Education Minister Tareq Shawqy deplored terrorist attacks that claimed the lives of Egyptians.  He also lauded soldiers’ role in protecting Egypt and preserving its stability and security. Five policemen were killed earlier in the day when unidentified gunmen opened fire at a checkpoint in El Badrasheen area, south of Cairo. (MENA)

Minister of Awqaf Mohamed Mokhtar Gomaa performed the absentee funeral prayers over the martyrs of the Badrasheen terror attack. The funeral prayers were offered after Friday’s sermon and prayers at el Refaey Mosque, Old Cairo. Egypt’s mufti Shawki Allam, ministers of manpower, antiquities, and local development, along with Cairo governor, representatives from police, army and others took part in the prayers. Speaking to MENA, Gomaa condemned the coward terror attack, reiterating that Islam and all the divine religions rejected terrorism, extremism, and violence. Five policemen including an officer was killed after some militants attacked their police vehicle in Giza’s township of Badrasheen. (MENA)

Coptic Catholic Patriarch Ibrahim Isaac condemned on Friday a terrorist attack that targeted a security checkpoint in Badrasheen of Giza. Isaac expressed his condolence to the Egyptian people. He wished speedy recovery for the injured(MENA)

Egypt's Mufti Shawki Allam on Friday condemned as treacherous a terrorist attack that targeted a security checkpoint in Badrasheen in Giza, leaving five policemen dead. Terrorist and extremist groups seek retaliation for the successful security crackdowns on their hotbeds by the Armed Forces and police, the mufti said in a statement. All Egyptians are standing united against terrorism and extremists who seek to destabilize the nation, he added. Allam, meanwhile, offered condolences to the families of the victims.

Grand Imam of Al Azhar Ahmed Al Tayeb strongly condemned Friday a terrorist attack on a security checkpoint in El Badrashein, Giza, which left five policemen dead. Al Tayeb described in a statement the attack as "despicable," confirming his rejection to all forms of violence, extremism and terrorism. He stressed his support for the army and police in the fight against terrorist groups that seek to undermine the security and stability of the country. Also, he expressed his sincere condolences to the Egyptian people and the families of the martyrs, asking God to have mercy on their soles and grant them peace. (MENA)

Giza Governor Mohamed al Daly condemned on Friday a terrorist attack which left five policemen in Badrasheen.  The Governor said that terrorism tried to destabilize Egypt much and kill innocent people, noting that terrorism has no religion and the will of Egyptian people will prevail.  He expressed his sympathy with the families of the victims. (MENA)

Head of the Youth and Sports Committee of the House of Representatives Mohamed Farag Amer deplored on Friday a terrorist attack on a security checkpoint in Giza's El Badrasheen district. In a press release, he underlined that Egyptian people support efforts exerted by the Armed Forces and police to face terrorism and all terrorist and Takfiri groups.  He also called for confronting those who are involved in these terror attacks, especially countries funding, arming and sheltering terrorists. Amer also offered his condolences to the Egyptian people and families of the victims. (MENA)