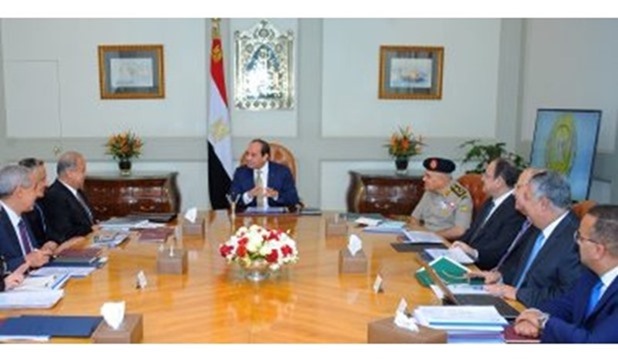 In a plain positive message to all Egyptians, Arabs and foreign investors inside and outside Egypt, President Abdel Fattah al-Sisi issued a presidential decree No. 478 for 2016 stipulating the establishment of the "Supreme Council for Investment" under his chairmanship.

This decree comes at the proper time to emphasize that investment is the state's top priority, and that it would reach new vistas during the coming period.


Having this council chaired by the president, is a sign that Egypt is fully aware of the importance of investment and actively seeks to eliminate the bureaucracy which resulted in a sapped investment.


- Improving investment climate, boosting the capacity of the national economy to attract investment.

- Identifying activities and projects as priorities in terms of the various specialized sectors and geographical areas.

- Reviewing Egypt's rank in international reports for business and competitiveness.

- Setting a framework for investment legislative and administrative reform and removing all obstacles facing investors.

- Achieving a sustainable development within the framework of the state economic development plan.


The council sessions are held once every two months and whenever urgent.

All ministries and departments and persons in charge are committed to implementing decisions issued by the Council.

The Council's technical secretariat headed by the investment minister takes over preparation of the agenda, sessions and applying all decisions and recommendations to all ministries and concerned bodies.

In its first full board meeting, the president okayed suggestions of handing out free infrastructured areas for investors who would build industrial projects in the southern Egyptian governorates.

According to one decision, agricultural and industrial investment enterprises in this area of the country would be given five-year exemption of taxes. The same privilege would be also granted for the newly-established projects for export purposes, including strategic commodities.

The council has also assented to a three-year exemption of taxes on dividends and capital gains made from trading stocks on the Egyptian stock market.

The meeting decided a 35 percent discount would be given for people who pay off prices of lands set by the State Land Recovery Committee before end of December.

The propitious decisions included tax reconciliation for owners of SMEs who failed to issue tax file numbers (TFNs) for their businesses. Under this decision, the owners can pay a symbolic lump sum installment per year to continue business activities until 2017. The installments would be set up during the coming two months.

Under the decisions taken during the Supreme Investment Council’s first meeting which was chaired by President Abdel Fattah El Sisi, the owners of SMEs can take advantage of the Central Bank of Egypt (CBE) initiative that gives out 5 percent loans in addition to lands planned for similar purposes.

According to subsequent regulations to be set by the trade minister, the Industrial Development Authority (IDA) would issue one-year temporary licences to give enterprises a chance to legalize their statuses.

Also, the council announced 25 percent discount on prices of land plots in the new capital city, as well as the new cities of east Port Said, new Ismailia and Alamein.

In the southern governorates, the decision set a 500-pound price per square meter for lands sold in the new cities of New Minia, New Sohag, New Assiut and New Beni Suif.

The ministries and authorities concerned would report to the council on the implementation of these decisions before its next meeting.