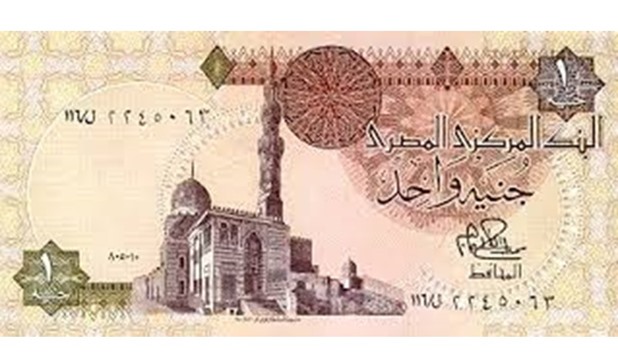 
In 1834, a Khedival Decree was issued providing for the issuing of an Egyptian currency based on a bimetallic base, i.e.: based on gold and silver. The Egyptian pound, known as the gineih, was introduced, replacing the Egyptian piaster (qirsh) as the chief unit of currency. The piaster continued to circulate as 1⁄100 of a pound, with the piaster subdivided into 40 para. In 1885, the para ceased to be issued, and the piaster was divided into tenths These tenths were renamed milliemes (malleem) in 1916.

The legal exchange rates were fixed by force of law for important foreign currencies which became acceptable in the settlement of internal transactions. Eventually this led to Egypt using a de facto gold standard between 1885 and 1914, with one Egyptian Pound = 7.4375 grams pure gold. At the outbreak of World War I, the Egyptian pound was pegged to the British pound sterling at EGP 0.975 per GBP 1.

Egypt remained part of the Sterling Area until 1962, when Egypt devalued slightly and switched to a peg to the United States dollar, at a rate of 1 Egyptian pound = 2.3 dollars. This peg was changed to 1 pound = 2.55555 dollars in 1973 when the dollar was devalued. The pound was itself devalued in 1978 to a peg of 1 pound = 1.42857 dollars (1 dollar = 0.7 pound). The pound floated in 1989; however, the float is tightly managed by the Central Bank of Egypt and foreign exchange controls are in effect.


On June 1, 2006, 50 piaster and 1 pound coins with date 2005 were introduced, with the equivalent banknotes to be scrapped later. The coins bear the faces of Cleopatra VII and Tutankhamun, and the 1 pound coin is bimetallic. The size and composition of 50 piaster coins was reduced in 2007.

With the possible exception of the now-ubiquitous 1-pound coin, coins are encountered much less frequently than notes, even for the smallest amounts, but coins down to 5 piasters remain legal tender. However, some vendors may refuse to accept five- and ten-piaster coins, on account of their low value and the consequent difficulty in giving them back in change; prices tend to be rounded to the nearest quarter pound, making 50- and 25-piastre coins much more common.