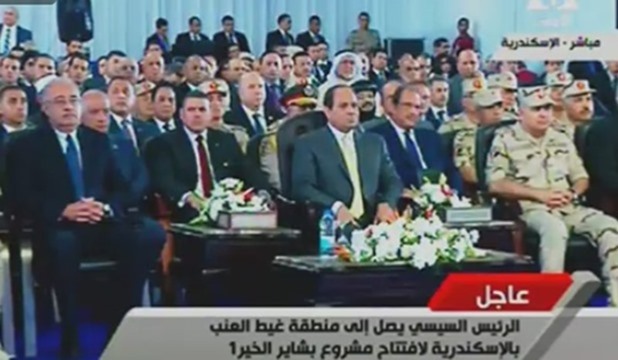 Worth some 1.2 billion pounds, the "Bashayer El Khair 1" is part of a plan to upgrade shanty towns in the Mediterranean city.

President Sisi handed over the ownership contracts of new apartments to residents at Alexandria’s Gheit El Enab district. The residential units are fully furnished and turnkey.

At the inauguration of the "Bashayer El Khair" housing project in Alexandria, President El Sisi expressed regret over the drowning of over 160 persons when an illegal migration boat sank in Rosetta last week.

He urged the Egyptian community to counter illegal migration either to or from Egypt.

The community has to work with state institutions to face this phenomenon, he said.

Sisi announced that a new aquaculture project will be established at the tragedy’s location, saying it could be the largest-ever in Egypt.

The aquaculture project has started a year ago and is expected to be open in three months, the president said, noting that it would need between 5,000 and 6,000 workers.

Also six or eight factories are ready to operate in the industrial zone in Kafr El Sheikh with each needing about 100 workers, he said.

For his part, Commander of the Northern Military Zone Maj. Gen. Mohamed el-Zamalout said this project reflects cooperation between the Armed Forces and people. It sends a clear message that change is possible in Egypt, if cooperation is there, he noted.

According to him, "Bashayer El Khair" serves as an integrated system and is the outcome of thorough planning and honest cooperation with the civil society.

It sets a unique example of social integration that should prevail among the people without adding to the financial burdens of the State.