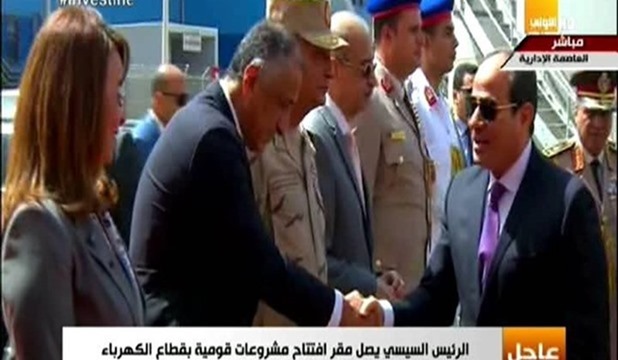 In a post on the company's Twitter account, Siemens President and CEO Joe Kaeser said "the record-breaking completion of our mega projects in Egypt will not only transform the power landscape in Egypt, but will also serve as a blueprint for building up power infrastructure in the Middle East and all over the world".

President Abdel Fattah El Sisi inaugurated on Tuesday 24/7/2018 a number of national projects in the new and renewable energy sector via the video-conference.

The Egypt Megaproject, which is being developed by a partnership between Siemens and the Government of Egypt, will involve the development of power generation facilities with a combined capacity of 16.4GW. It is expected to boost the country’s power generation by approximately 50%.

The total capacity of the Jabal al-Zeit wind station is stated to be 580 megawatts, with a production rate of 2 megawatts per turbine. The first project includes 120 turbines, the second includes 110 turbines, while the third includes 60 turbines.

The plant contains a system of monitoring migrating birds through the radar to stop turbines when they pass and re-operate after they leave, a system used for the first ever time in the world.

The station consists of three administrative buildings, including the control rooms building of the station, which were created and designed in line with the latest international standards and the latest technologies to enable staff to monitor all the turbines at the same time and connect them to the national power grid.

El Burullus power plant is a 4800 MW natural gas-fired combined-cycle power plant (CCPP) to be located north of Kafr esh-Sheikh Governorate, along the Mediterranean Sea shoreline in Egypt. It is one of the world’s biggest gas-fired power plants.

The project is completed at a cost of LE 250 million. The total capacity of the Benban solar plant is stated to be 525 MW.

Beni Suef is a new combined-cycle natural gas power plant being built by Siemens, as a part of the Egypt Megaproject. The 4.8GW power plant will be located in Beni Suef in the southern part of the country, approximately 110km south of Cairo.

It will be the world’s biggest gas-fired combined-cycle power plant complex when fully operational in 2017, capable of providing electricity to approximately 15 million Egyptians.

Spread across an area of 500,000m², the plant will use innovative technology from Siemens that combines a gas turbine with a steam turbine to achieve high fuel-efficiency and low production costs. The exhaust heat from the gas turbines will be used to power the steam turbine, resulting in efficient working of the power plant with lower fuel consumption levels.

The plant will initially be operated in simple cycle mode, while heat exchangers and steam turbines will be gradually added to the plant to convert it into a combined-cycle plant, generating a total output of 4.8GW.

The power plant will be built in four modules, with each module including two H-class gas turbines, two heat recovery steam generators, a steam turbine, and three 500kV generator transformers.

The new combined-cycle power plant (CCPP) will be located in the proposed new capital of Egypt, approximately 42km east of Cairo. It is scheduled to become fully operational in the first half of 2018.

The plant will significantly increase Egypt’s electricity generation capacity, while contributing to the national economic development.

The New Capital power plant project is being executed by EEHC as part of the Egypt Megaproject, which involves the development of three 4.8GW natural gas-fired CCPPs and up to 12 wind farms with a combined capacity of 16.4GW by Siemens and the Government of Egypt.

Siemens was awarded multiple contracts worth €8bn ($8.94bn) for the development of the Egyptian power generation facilities in June 2015. The contracts extend the memorandums of understanding (MOUs) signed during the 2015 Egypt Economic Development Conference (EEDC) held in Sharm El Sheik.

Siemens preferred Orascom Construction as its engineering, procurement and construction (EPC) partner to supply the power plant on turnkey basis.