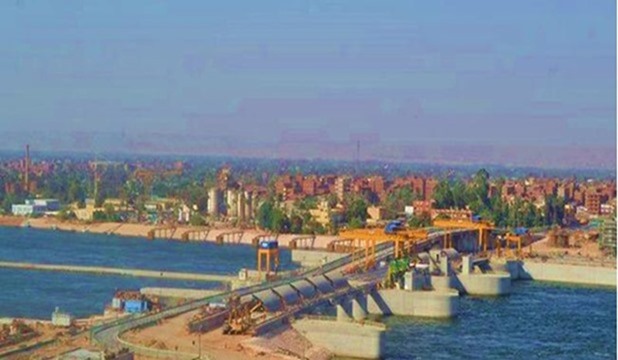 President Abdel Fattah El Sisi opened the New Assiut Barrage project and its hydraulic power plant at a cost of EGP 6.5 billion with the participation of a group of youths and engineers who contributed to implementing the project.

Sisi listened to a presentation by head of the High Dam and Aswan Dam Authority Hussein Galal on the implementation of the project, which is considered the third largest water project on the River Nile after the High Dam and Naga Hammadi Barrage.

The project's administrative building includes the operation room of the barrage that will provide irrigation water to 690,000 hectares of lands.

The hydraulic power plant aims at reducing carbon emissions to preserve the environment, he added.

The President also listened to a presentation by director of the operation room of the project Mahmoud Ali Abdel Alim.

He said the project was carried out according to the latest international technologies in terms of designing, operation systems and manufacturing.

He said the 17-meter-wide and 6.6-meter-high gates of the project were built by Egyptian hands, adding that each one weighs 150 tons.

The New Assiut Barrage Project consists of an embankment dam, a gated spillway, a river hydropower plant and a navigation lock in the River Nile.

The new project was implemented by a consortium of international and national companies with a total cost of EGP 6.5 billion.

The barrage includes two navigation locks on the right side of the Nile and eight semi-diagonal gates.