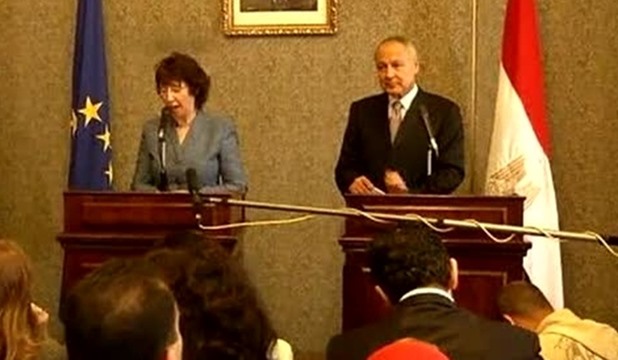 The 6th Meeting of the EU-Egypt Association Council was held on April 27, 2010 in Luxembourg. Leading the Egyptian delegation to the meeting were Foreign Minister Ahmed Abul-Gheit and Minister of International Cooperation Fayza Abul-Naga.

The Council is the uppermost institution governing relations between Egypt and the EU; hence the importance of the meeting.


Discussed at the meeting were developments of the Egypt-EU Association agreement particularly in respect of the political dialogue established between EU countries and their counterparts in the South.


The meeting of the Council comes after the 2009 EU decision to raise cooperation with Egypt to the highest level a non-EU-member state could aspire to.


The meeting spotlighted several strategic partnerships prominent among which are those with Italy and Spain. An Egyptian-Italian summit meeting is expected on May 19. Egypt is also currently chairing the Initiative of the Union for the Mediterranean on the South side, which requires top-level coordination with the EU.


Abul-Gheit also discussed the conditions of migrants in Europe in general; the Egyptians in particular. The need was underlined to protect their rights and respect their cultural privacy.

Also dealt with at the meeting were ways of containing the right-wing extremist trend currently on the rise in Europe.

Competitiveness and productivity of the Egyptian Economy (€220 million)

Negotiations are due begin this year on the 2011 – 2013 budget which will provide Egypt with a sum of €449.29 million in non-refundable grants.


What is the Association Agreement?

The EU/Egypt Association Agreement reflects the approach of the Barcelona Process, as it contains provisions with respect to the three pillars of the Euro-Mediterranean partnership. It is concluded for an unlimited period. Its overall objective is to establish the appropriate framework for co-operation and partnership, which will contribute to the economic and social development of Egypt in the context of an endeavour of regional economic integration aiming to create an area of shared economic prosperity. As stated in article 2, relations between the parties shall be based on the respect of democratic principles and fundamental human rights, which constitutes an essential element of the Agreement.


A regular political dialogue and co-operation will be established between the parties to develop better mutual understanding and increase convergence of positions on international issues, enhance regional security and stability, and promote common initiatives. It will cover subjects of common interest, namely peace, democracy and regional development.


The establishment of a bilateral Free Trade Agreement will be based on reciprocal tariff liberalisation for both industry and agriculture with respect to substantial trade between the parties. Quantitative restrictions and equivalent measures will be removed. For industrial goods, Egypt reciprocates the preferential treatment granted by the EU under the 1977 Co-operation Agreement, by dismantling all industrial duties over a transitional period of up to 15 years from entry into force. Four different tariff-dismantling schedules by group of products are provided for. Liberalisation in agriculture and agro-industry is equally foreseen under the Agreement. The EU significantly improves its concessions for Egyptian agricultural exports by increasing the tariff quotas granted for Egypt's main exports. A mechanism to review agricultural concessions is foreseen three years after entry into force. Egypt equally reduces tariff duties for a number of EU agricultural exports. Processed agricultural products equally enjoy reciprocal concessions, thereby improving market access for both parties.


A Protocol on rules of origin is established between the parties and is part of the Agreement. Its version is the most developed used by the EU in its relations with partner countries. Specific rules of origin are identified for agricultural and industrial products, while a no drawback rule will be applied over time. Further, such protocols provide for diagonal cumulation with other partners of the Euro-Mediterranean area, which will be operational as soon as identical Protocols on rules of origin are adopted among them.


The Agreement includes also provisions for consultations and deeper co-operation on the right of establishment and supply of services, payments and capital movements, as well as on legal approximation in the field of competition, including public aid and monopolies of a commercial character. On intellectual property rights, the parties will seek effective protection in the context of their multilateral commitments. Progressive liberalisation on public procurement is equally foreseen. Economic co-operation will be intensified between the parties in a number of sectors, such as education and training, science and technology, environment, industrial co-operation, investment promotion, standardisation and conformity assessment, approximation of laws, financial services, agriculture and fisheries, transport, information society and telecoms, energy, tourism, customs statistics, money laundering, fight against drugs and terrorism, consumer protection and regional co-operation.


Co-operation is foreseen in the third pillar of the Barcelona Process too, i.e. social and cultural co-operation. A dialogue on social matters will take place, in particular on the movement of workers, migration issues, intercultural dialogue and social integration of Egyptian and Community nationals legally residing in the territories of their host countries. Co-operation is envisaged for the prevention and control of illegal immigration and other consular issues, whereby EU Member States and Egypt agree to negotiate and conclude bilateral agreements with each other, regulating specific obligations for the readmission of their nationals. Co-operation is equally envisaged on cultural matters, audio-visual, media and information.