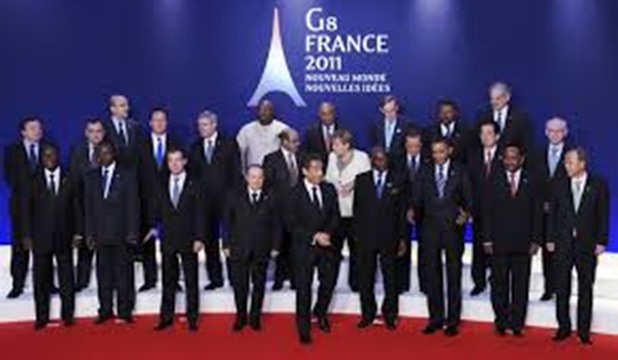 The G-8 held its 37th summit in the city of Deauville, France with discussion on a response to the so-called “Arab Spring” that has seen mass uprisings against Western-backed regimes.


Washington urged its G8 partners to help Egypt convert its debts into investments for jobs as part of efforts to boost the country's flagging economy and fledgling democracy.

The European Bank for Reconstruction and Development was also urged to place its expertise at the service of the countries east of the Mediterranean.

With Egypt and Tunisia set to witness a slow tourist season, the former was promised US10 billion until mid 2012; the latter US25 billion over a period of 5 years.


The Agenda
1. The opening day of the G8 summit heard calls for Yemen's President Ali Abdullah Saleh, a longtime client of Washington, to step down after 33 years in power in an attempt to avoid a civil war in the impoverished country. There were also calls for the Syrian regime to end its military repression against demonstrations, but no call for the country's President Bashar al-Assad to leave office.

And there was also no joint statement on Libya, where the US and NATO are beginning their third month of a bombing campaign that has wreaked increasing destruction and loss of life in the North African country.
2. The options for re-launching the Israeli-Palestinian peace process.
3. The state of world economy, the impact of the Japanese nuclear meltdown, climate change.
4. Climate change and the impact of the Japanese nuclear meltdown.


E-G8 Forum
The E-G8 Forum (or simply the eG8) was an invitation-only summit of leaders in government and industry focusing on the Internet in the context of global public policy. It was convened by French President Nicholas Sarkozy from May 24-25th, prior to the 37th G8 summit, and was held at the Tuileries Garden in Paris.

Egypt's participation
Prime Essam Sharaf presented Egypt's vision regarding programs needed to solve the problems facing it and ways of overcoming its current economic crisis. The Prime Minister called for a greater cooperation with G-8 countries towards a better future for both.

On the sidelines of the summit, the Prime met his French counterpart Francois Fillon who promised to increase Financial assistance provided by the French Development Agency (Agence Française de Développement, AFD) from 150 million euros to 250 million euros.