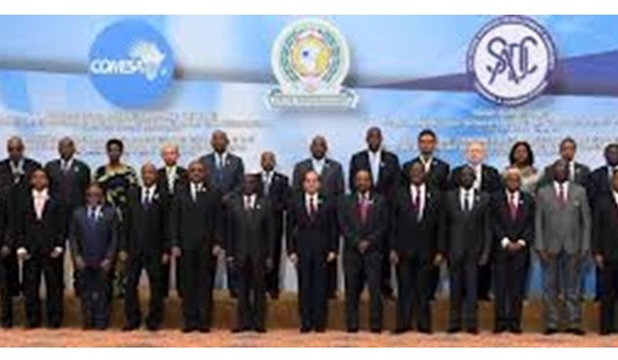 Introduction
on June 7, 2015, in Sharm El-Sheikh began the preparatory meetings for the summit of the three economic African blocs, in preparation for the signing ceremony of the 26 heads of state, on June 10, 2015, the convention of integrating the three major economic blocks of the African, which are the «Common Market for East and Southern Africa» known as «COMESA», the Organization of Southern Africa development «SADC», and the East African community countries.


A number of heads of international organizations participate in the meetings, including the World Trade Organization, the African Union, UNCTAD, the Economic Commission for Africa in the United Nations and the African Development Bank.

The 26 countries of the three blocs represent half of the states of the African Union. The gross domestic product estimated 60% of the GDP of the continent and includes 57% of the total population of the continent.

It is scheduled to take action that would cancel tariff and non-tariff barriers to trade on goods, liberate trade services, facility investment cross-border and businessmen movement, identify cooperation frameworks among the countries of the three blocs to simplify customs procedures and trade facilitation measures, as well as encouraging cooperation.

The summit witnesses issuance of Sharm el-Sheikh Declaration and the signing of a final agreement to establish a free trade area among the three blocs, which would liberalize trade among these countries and eliminate any trade barriers. This declaration is an effective step in the path of the African Economic Union to establish the continental free trade area, which is planned to begin in 2017.

The summit comes as carrying out of what was agreed upon during the previous two summits in 2008 and 2011.The integration of the three blocks in one economic entity is the first experiment of its kind in Africa.

The trend towards the launch of the blocks:

The idea of merging the three blocs was in 2005 to solve problems caused by the multiplicity of membership of countries in different economic groupings, which leads to a conflict of interests.

It aims to enhance trade relations between the COMESA countries, cooperates in the field of planning, and implements infrastructure projects, especially in roads construction, railways, ports, airports, power projects, also contributes to strengthening coordination between countries in order to serve their interests in the multilateral trade negotiations. It will also work on improving the investment climate.