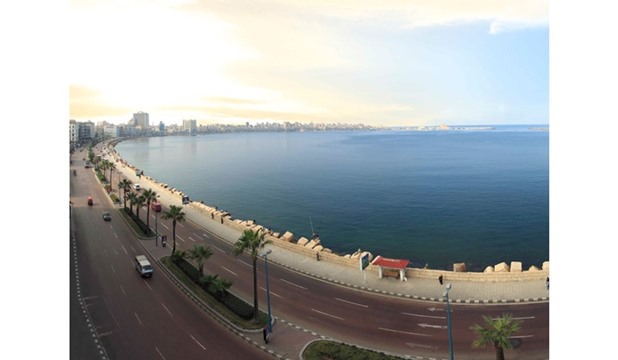 The largest port in Egypt and the greatest summer resort in the Middle East. It is located on the Mediterranean Sea north west of Delta, 225 Km from Cairo by agricultural road and 221 km by desert road. Named after Alexander the Macedonian who ordered its foundation in 332 B.C., on the site of a small village called Rhakotis to be the capital of his reign in Egypt, a port near to his country and a Greek cultural centre.
Since its foundation Alexandria remained for many centuries a centre of cultural radiation to the whole world.
It occupied a remarkable place in the history of mankind.
Today Alexandria is considered the second capital of Egypt. It is distinguished by its strategic location, moderate climate and its beautifully fine sandy beaches which cover alarge area between Agamy in the west and Abu Qeir in the east which made it worthy of its well merited title "Pearl of the Mediterranean".
Alexandria was, and still is, a prominent cultural beacon for knowledge seekers and the history of its famous  library- whose revival is underway- tells the story of the dawn of culture, enlightenment and creation.
Various religious sites are widespread in Alexandria of which are:
The Jewish synagogue in Al-Nabi Daniel street ,
St Marc Church established in the first century A.D. by Saint Marcus.
Saint Catherine Church and Abu Mina Monastery which lies 50 km from Alexandria.
Al-Montazah Palace 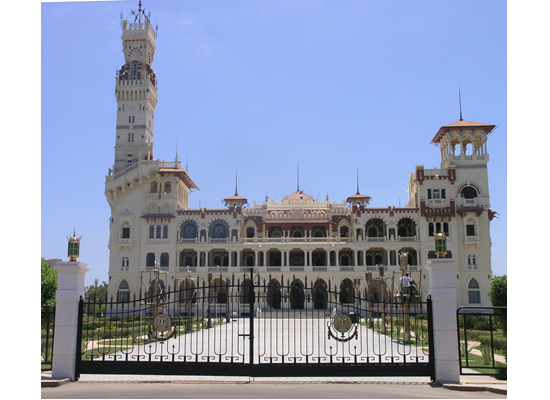 Built on low plateau east of Alexandria and overlooking a beautiful beach, amid about 370 feddans of gardens and woods, the Palace comprises a number of buildings, the most important being Al-Haramlek, the summer residence of the former royal family, Palestine Hotel, the tourist hotel, was built in the gardens, while Al-Haramlek was turned into a luxury hotel.
The Montazah Palace Gardens 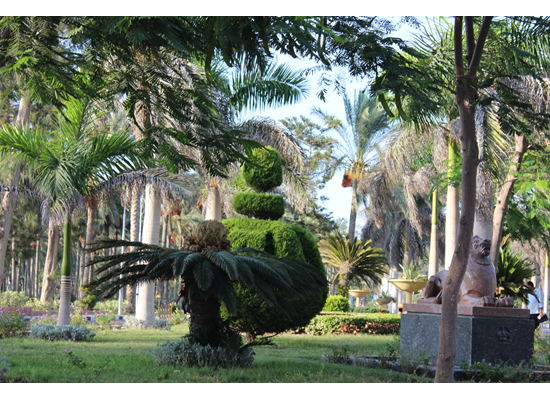 These gardens cover an area of 370 feddans and contain trees, palms, and flowers. There are also a museum, several natural bays and beaches, as well as complete tourist centre, a hotel, restaurants, bungalows and a children's park of 4.5 feddans area.
The Antoniadis Gardens 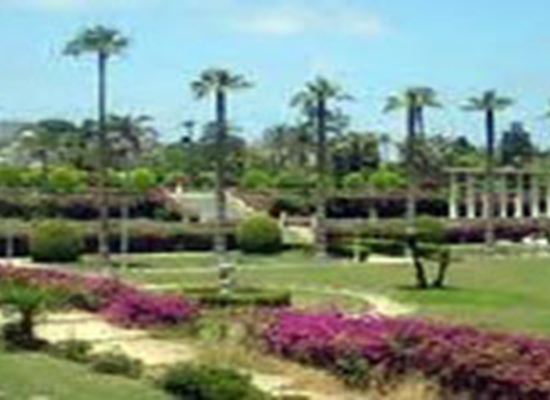 They contain beautifully arranged trees and flowers, as well as several Grecko statues in marble and the Antoniadis palace.
The Alexandria University Conference Center
Alexandria Cultural Centre, in Al-Silsilah, over an area of 42,000 m2, comprises a conference centre, the Alexandria library, an open courtyard and a garage. The conference centre, on an area of 5,000 m2, has an overall seating capacity of 2672. There is large cafeteria to serve the main auditorium overlooking the sea. A smaller cafeteria caters to the other smaller halls.
The conference center comprises:

The Main Auditorium, 1700 seats, is a large hall without any pillars to obstruct the view. It is a multi-purpose facility with a fully-equipped stage that allows for holding international and national conferences and for staging plays, concerts, ballets, and operas. There are six separate booths equipped for simultaneous interpretation in six languages.
Three smaller halls: The first 400 seats, and the second and third, 286 each. Five separate booths for simultaneous interpretation are attached to each hall. All the halls are equipped with audio-visual aids, closed-circuit TV, air-conditioning, and direct-dial telephone services. Other facilities for information, security, and parking areas are also available

Attarine market was one of the most famous markets of this ancient city  .It is specialized with the sale of all types of spices , legumes, seeds, grains , and then expanded its activities to include all other goods from clothes , laptops, shoes and other, and there are old markets retains characteristics such as  textile  market or (Thread ) which handles the sale of all types of yarn and all of the art supplies embroidery , knitting .

Zanat el Sitat street in it sells all the supplies of women as does the Moroccan market, and others.


Over its long history, Alexandria has been the cradle of several civilizations of the ancient world; Pharaonic, Hellenistic and Roman.
This multicultural museum lies safely under Alexandria's Mediterranean coastal water, sand during the Fifth Century B.C. it formed part of the ancient city of Alexandria and was devastated by earthquakes and tidal erosion.
A project was initiated in 1992 by the Supreme Council for Antiquities, in cooperation with the European Institute of Submerged Antiquities, to make a topographic survey of the area of royal facilities at the submerged parts, specifically the Eastern Port, which commands a major historical importance.
Exploratory operations resulted in the following:
An overall topographic picture of the submerged royal quarter in ancient Alexandria.
A number of 1300 sites were located at sight and cleared of attaching sediments.
Six archaeological maps were drawn up, showing accurately the topography of several areas of major historical significance.
These operations have allowed a full panorama of the reputed Magnus Portus. Major discoveries then followed as landmarks of the isles of Pharos (referred to in Homer's Odyssey (7th Century B.C.) and Interodos started to unfold, with their royal palaces, statues and decorations. Several antiquities such as two statues of the Sphinx, of which one is made of grey granite and the other of durite, were broken up as a result of natural disasters.
These structures are indicative of the dense constructions along the eastern coastline. These discoveries made over the years 1996, 1997 and 1998 have given impetus to further explorations of the seaport basin and the fathoming of depths.
Collection of Submerged Monuments
In 1996, a new department of Underwater Archaeology of the Supreme Council of Antiquities was founded as a result of the excavations carried out at Qait Bey fortress and the discovery of part of the royal quarter in the Eastern harbor in Alexandria. Similarly, the year 1962 was significant in that it marked the uplift of the colossal statue of Isis Pharia from the depths of the Mediterranean. The year 1933 also marked other discoveries at the Abu Qir Bay.
The Museum displays some of the artifacts that have been salvaged from both the Alexandria Eastern harbor and Abu Qir Bay
Headless statue of a woman (probably the goddess Isis), in a striding posture, in which the left leg is advanced. She is dressed in a transparent garment that accentuates the beauty of her body. The dress is tied on the left shoulder in a knot. The right arm is stretched along the side of the body and the hand is missing. The feet are also missing.
Isis is one of the most important goddesses in ancient Egyptian religion. She was the goddess of love and the symbol of devotion as a wife and mother. She was the goddess of maternity, and protector of mother and child.
She was worshiped all over Egypt, and her cult spread to many places in Europe. She was identified with several other goddesses
Dimensions: H 152.5 cm, W 48 cm
Thickness: 34 cm
Material: Black basalt.
Date: Ptolemaic Period
Provenance: AbouKir Bay
Head of the god Serapis, with a hole on top for fixing the kalathos. The eyes were inlaid, but are now only two cavities. The mouth is open with a faint smile. The facial features are distinct.
Parts of the five characteristic locks of hair, which usually fall on the forehead, are missing.
The god Serapis was a fusion of Egyptian and Greek religious concepts originating in Alexandria, where Ptolemy I started his cult and constructed the first known shrine to him, called the Serapeum. His worship continued throughout the Roman period and his temples spread throughout the Roman Empire.
Serapis was frequently combined with other deities, both Egyptian and Greek. Such combinations were Serapis-Zeus, Serapis-Helios and Serapis-Amun. His statues are characterized by a long face, heavily curled beard, long mostach with curling ends, and five locks of hair falling over the forehead.
The kalathos, one of his attributes and a symbol of abundance and fertility, surmounts his head.
Dimensions: H 57cm, W 35cm

Material: White marble
Date: Ptolemaic Period
Provenance: Abou Kir Bay (Alexandria)
Egypt is already famous for its locations for diving practice. Travellers come from the four corners of the earth to explore the underwater realms of coral reefs and exotic marine life off Hurghada and Sharm Al-Sheikh. Now Egypt offers divers the chance to venture into a submerged city off Alexandria, and explore an eerie, waterlogged domain of ruined palaces, crumbling colonnades, ancient sphinxes and mysterious statues.
'Alexandra-Dive' is the first and only diving centre in Egypt to offer this underwater historical experience. The centre was inaugurated in the Mediterranean seaport and will be in operation in May.
Alexandra-Dive offers five diving spots in the eastern harbour. The first is called Qaitbay and is situated close to the Qaitbay fort at depths of between eight and 10 metres. It contains about 4,000 archaeological pieces that date back from Pharaonic to Graeco-Roman times.
To explore this site properly, two dives are recommended, each lasting 45 minutes.
The second spot is called Qaitbay 2 and is 200 metres north of Qaitbay fort. In this area, a diver will see dozens of amphorae around an ancient wreck. The area can all be explored in a single dive.
Qaitbay 3 is the third spot, 650 metres north-west of Qaitbay fort, at depths between 15 and 18 meters. Here divers can explore wrecks from the third century BC. A diver needs only one dive to explore the area.
The fourth spot is called East Harbour, Site One. It is found in the eastern harbour and is up to eight metres deep. The site includes relics of the royal zone from Ptolemaic and Roman times and several columns, sphinxes and royal statues. To see the area properly, two dives are recommended.
The fifth and last dive is East Harbour, Site Two. Here the dramatic remains of a downed World War II Italian fighter plane loom out of the gloom, surreally surrounded by a forest of ancient columns and statuary. The site only needs a single dive.

Alexandra-Dive's trips start early in the morning, preceded by a lecture on the site, its historical importance, and details of the objects there. The divers then board either a 20 meters long diving boat, designed in the Pharaonic style with an ex-navy officer as captain, or a second vessel, 18 meters long, that is always ready in case of emergency. The vessels are equipped with compressors, diving tanks, equipment for 50 divers, still and video cameras.