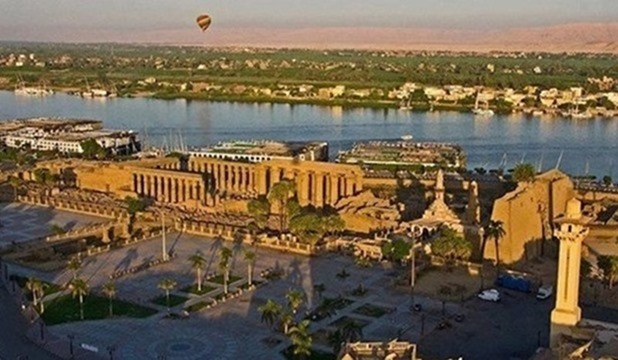 Luxor is the world's greatest open - air museum, filled with the awe - inspiring monuments of ancient civilization. It contains nearly one third of the world's antiquities. There is hardly a place in Luxor which has not a relic that reflects the greatness of the ancient Egyptians and their civilization that dates back to seven thousand years ago.

During the new kingdom (1567-1085) the capital of Egypt was Wesset which means "mace"to express the extreme authority of this city, then the name was changed to "Thebes" and Homer described it as “City of the Hundred Gates".

The Arabs called it "Luxor" means" The city of Palaces" because they were impressed by its magnificent edifices and huge buildings.

It still attracts hordes of visitors from all over the world to enjoy the monuments of the eternal city and its temples with their towering pillars.

On the Banks of the Nile 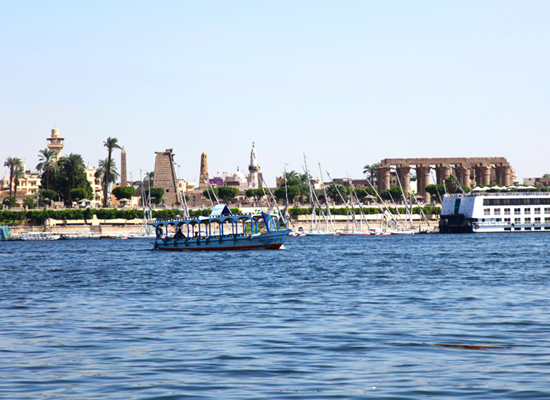 On the east bank of the Nile, in the city of the living, Luxor and Karnak temples greet the sunrise. The sunset on the west bank throws shadows through the City of the Dead: the Tombs of the nobles, the valley of the kings, Queen Hatshepsut's temple.

Recently, a bridge connecting the east and west banks has been constructed to speed up tourist traffic to the west bank.

The visitor of Luxor can make a journey to enjoy the wonderful tourist sites of Luxor soaring in a balloon above the temples on the east and west banks.

Some agencies organize daily balloon journeys which last for one and half hour. 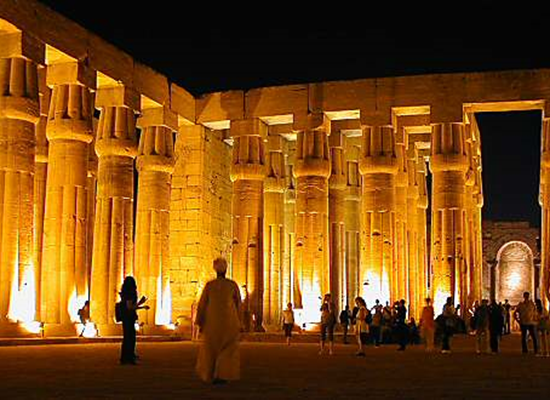 The Southern temple, dedicated to the principal of Thebes Amon, it was built by the New Kingdom Pharaoh Amenophis III, and expanded over centuries by famous pharaohs including Ramses II,Tit, and also Alexander the Great.

The grandeur of the edifice represents that of Thebes at its zenith. It was known to the ancient Egyptians as “lpet Reseyet”, the harem of the South. 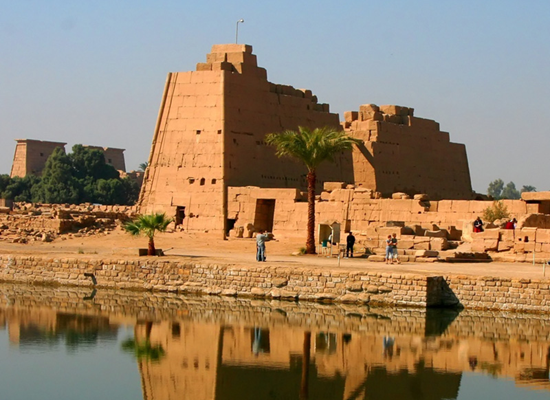 Leading to the temples is the avenue of the Rams, representing the supreme Theban God Amon, symbol of fertility and growth. Beneath the Rams heads, small statues of Ramses II were carved.

Karnak is composed of a vast complex of temples, chapels and other buildings of various dates. The name Karnak comes from the nearby village of El-Karnak. Whereas Luxor to the South was Ipet-Ray,Karnak was ancient Ipet -Isut, the most select of places.

Theban kings and the god Amon came to prominence at the beginning of the Middle Kingdom. From that time, the temples of Karnak were built,enlarged, torn down, added to ,and restored over more than 2000 years until Roman times.

The ancient Egyptians considered Ipet-Isut as the place of the initial rising of the first time, where Amon-Ra made the first mound of Earth rise from Nun. At Karnak,the high priests recognized a king as the beloved son of Amon,king of all the gods.

The coronations and jubilees were also held here. Staffed by more than 80,000 people under Ramses III, the temple was also the administrative center of enormous holdings of agricultural land.

The largest and most important part of the site is the central enclosure, the great temple of Amon proper. The layout of the great temple consists of a series of pylons of various dates. The earliest are Pylons IV and V, built by Tuhtmosis I, and from then on the temple was enlarged towards the West and South. Courts or halls run between the pylons, leading to the main sanctuary.

The temple is built along two axes, with a number of smaller temples and chapels and a sacred lake. The northern enclosure belongs to Montu, the original god of the Theban area, while the enclosure of Mut lies to the south and is connected with Amon's precinct by an alley of ram-headed sphinxes. An avenue bordered by sphinxes linked Karnak with the Luxor Temple, and canals connected the temples of Amon and Montu with the Nile.

The Sound and Light Show 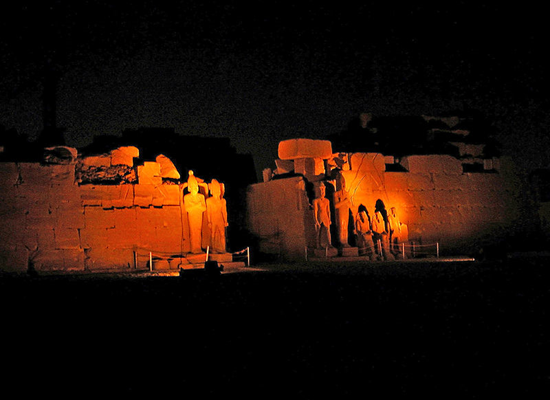 This spellbinding show, through the exquisite use of words, light and music, tells the story of these magnificent Karnak temples .The program is presented in Arabic, English, French German, Spanish. 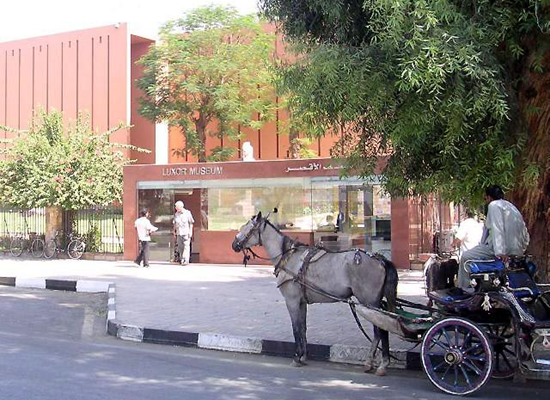 Recently inaugurated in the visitors centre in Luxor, it is the only one of its kind in the world. It houses 150 relics of mummies, coffins, tools the ancient Egyptian physician used, and paintings representing the religious funerary rituals. 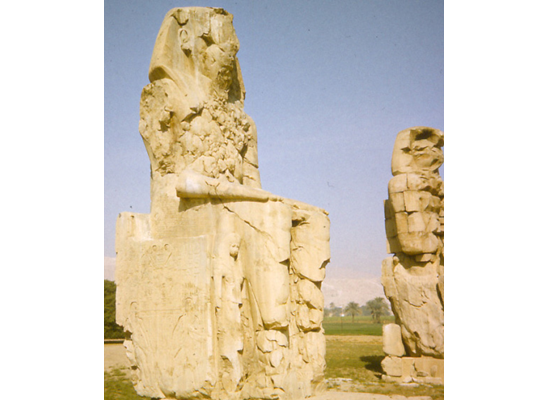 These two statues of Amenophis III measuring 18 meters once marked the entrance to the largest temple in Thebes It covered 385,000 square meters (4,200,000 square feet), and it was even larger than the temple of Amon-Re at Karnak.

Due to an earthquake in 27 BC, these statues were damaged and became known for a bell like tone that usually occurred in the morning. They were associated by the early Greek travelers with the figure of Memnon, the son of Aurora whose mother, Eos was the goddess of dawn.

This complex was built by Ramses II in the form of a fortified town which includes a temple, a place, and several chapels. Scenes depicted on the walls commemorate his victories over the Libyans, the Sarinians, the Cretans and others. They also includes unique reliefs of a sea battle.


Later Kings including Hatshepsut and Thutmose II added chapels to the complex, and Ptolemaic Kings renovated it. 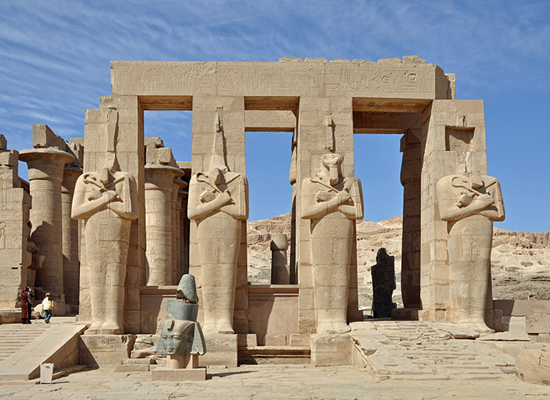 This is the warrior King Ramses II's mortuary temple at western Thebes that has inspired Shelley's sonnet “Ozymandias”. Its murals record the renowned Battle of Kadesh against Halite's. Its hallmark is a pillared hall with giant statues of Ramses II in Osirid form, wrapped in a blanket and holding sceptres.

Hatshepsut, the only woman to rule over Egypt as pharaoh, named her temple “Djeser-Djeseru” the splendor of splendors.

The mortuary temple of Queen Hatshepsut is one of the most dramatically situated in the world. The queen's architect, Senenmut, designed it and set it at the head of a valley overshadowed by the Peak of Thebes. A tree lined avenue of sphinxes led up to the temple, and ramps led from terrace to terrace. On the lowest terrace are reliefs depicting the transport of obelisks by barge to Karnak and the miraculous birth of Queen Hatshepsut.

Reliefs on the South side of the middle terrace show the queen's expedition by way of the Red Sea to Punt, the land of incense. Along the front of the upper terrace, a line of large, gently smiling Osirid

statues of the queen looked out over the valley.

Tombs of the Valley of the kings 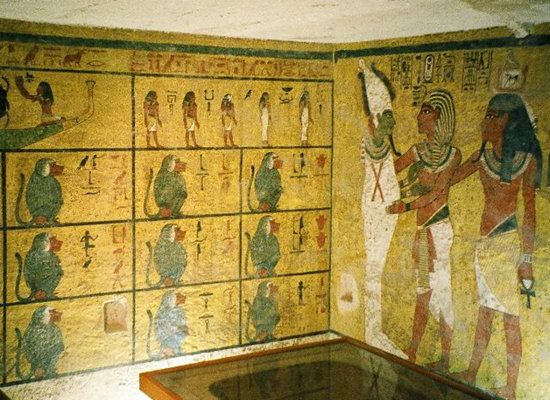 The Kings of the 18th, 19th, and 20th, dynasties carved their towards into the limestone mountains here and decorated them with designs showing the deceased Kings with the gods in the afterworld and texts from the book of the dead, and the book of the underworld.

King Tut Ankh Amon's tomb, the most famous tomb in the valley of the kings, circa 1352 BC. In 1922, Howard Carter's discovery of king Tut's fabulous treasures caused a worldwide sensation Other interesting and well-preserved tombs are those of Seti I, Ramses III,and Ramses II.

Valley of the Queens

The tombs of Nefertiti wife of Ramses II is the most renowned at the Valley of the Queens. It boasts restored vivid murals and instants.

Tombs of the Nobles: The most important are:the tombs of Nakht,Menena,Ra'as mes Ramuza,Senefru.

The Tombs of Deir el-Medina: The most important is the tomb of Sen Negem. 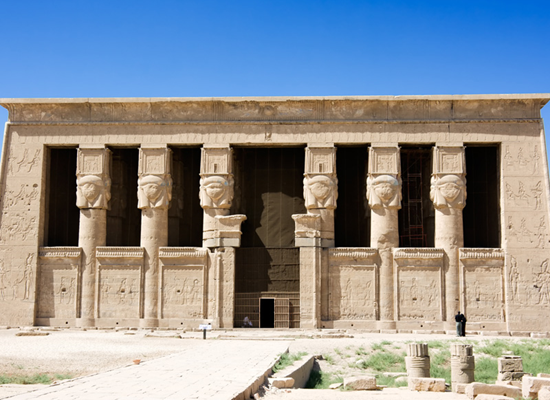 On the West Bank of Qena city 60 km north of Luxor. It is one of the Greco-Roman temples for the worship of goddess Hathor. It was built by King Ptolemy III and its construction was completed by the Roman Emperors. The ceiling of the hypostyle room has an astronomic decoration with the symbolic representation of the sky.

South of Luxor, constructed for the worship of god Khnum, the god of creation, in the form of a ram's head. It is one of the Greco- Roman temples within the hypostyle hall constructed by King Ptolemy VI and completed by the Roman emperors.

Nearby is a Christian monastery. It is the monastery of Manaus and El Shohada, constructed in the fourth century. But the monastery of the three thousand six hundred martyrs includes two churches; the walls of one of them are decorated with a fresco that dates from the tenth century.

Muhareb Monastery, 4km from the west bank of the Nile. Visitors of Luxor can make a journey to see the two temples of Dendera and Esna