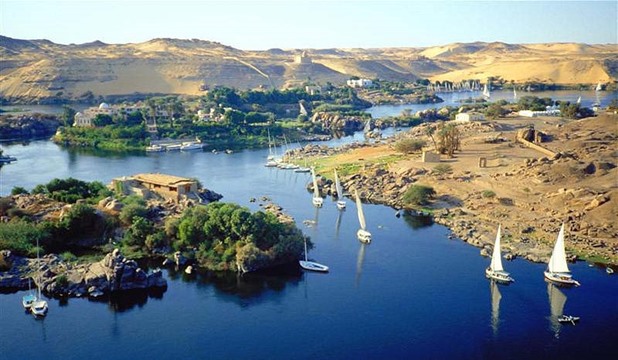 It is situated on the eastern bank of the Nile 899 km south of Cairo. Aswan is considered the most beautiful winter resort not only in Egypt, but also in the whole world as it is distinguished by its fascinating nature and serenity far from the bustle of cities,and its warm weather which is characterized by dryness and sunshine throughout the year.
One can spend a pleasant time wandering along the Nile corniche where the sandy tourmaline desert merges with granite rocks around aquamarine isles covered with palm trees and plants.One can also take a Nile cruise with sail-boats at sunset or a tour in the market which abounds in handicrafts,local products,spices and perfumes.
Main tourist's sites: 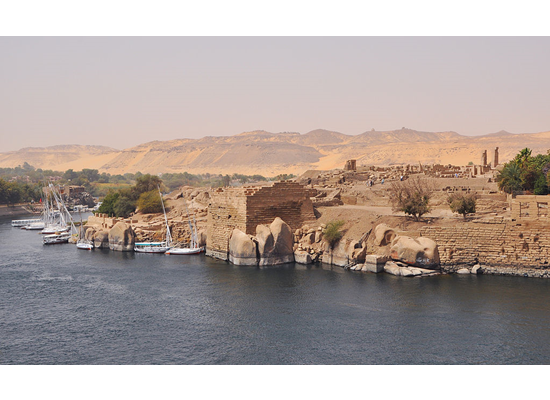 It was one of the most powerful forts on Egypt's southern borders. It lies opposite the old Cataract Hotel. On the island there are the relics of stone temples of various eras including the temple of Khnum,erected during the old Kingdom and reconstructed at the turn of the Pharaonic era.The island houses "The Nilometer" dating back to  the Roman era and also a museum containing an important collection of relics of the Greco-Roman eras which were discovered in Aswan and Nubia.
Plantation (Kitchener) Island
It lies in the mid-stream near Elephantine Island. It is a natural exhibition of exotic plants and trees imported from all over the world.It is the best place for spending leisure time relaxing in expansive shades.
Philae Temple 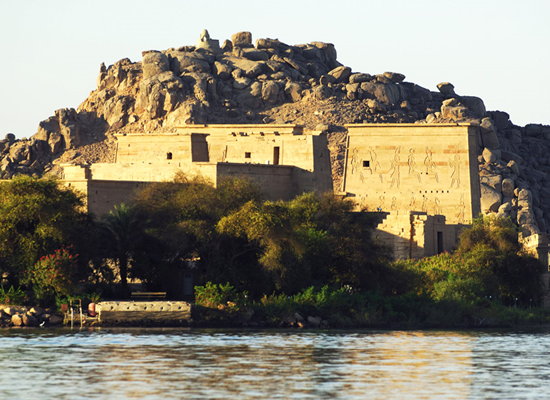 This temple was dedicated to goddess Isis. It was over flooded by the Nile. Philae temple was dismantled and reassembled in a new site on Agilika Island,about 500 km from its former site on Philae Island. 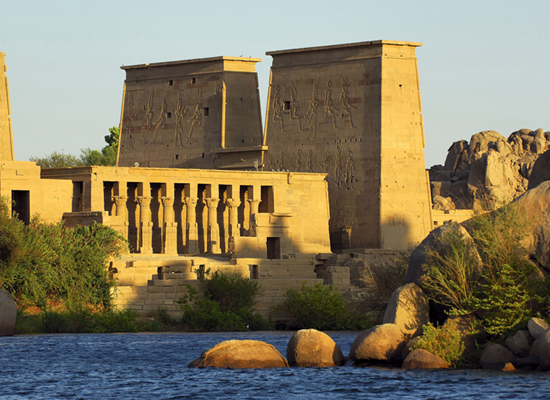 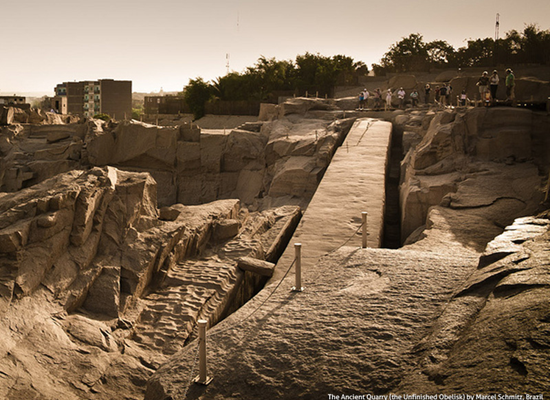 A huge obelisk incompletely carved,about 41 metres high and more than 1150 tons in weight. It owes its importance to the fact that it shows the techniques the ancient Egyptians used in carving obelisks.
There is the Fatimid cemetery which includes hundreds of tombs built of mud brick that dates back to the ninth century.
The Nubian Museum
The construction of the museum in Aswan is regarded as a great success of the international campaign for saving the monuments of Nubia which was supported byUNESCO.
The museum houses three thousand artifacts representing various archaeological periods throughout the history of Egypt (prehistoric, Pharaonic, Greek, Roman, Coptic and the Islamic).
The Culturual Centre in Aswan
The Cultural Centre in Aswan by Corniche El Nile,presents evening shows of Nubian folk art. The performances reflect local traditional life pattern of Nubians covering dance,music and ethnic festivals.
The High Dam
The High Dam is one of the outstanding architectural ahievements of the twentieth century.It was constructed to replace the old Aswan dam built in 1902. The High Dam was constructed to protect Egypt from the floods as well as providing irrigation and electricity all over Egypt. It is 3600 meters long.Visitors can easily locate Lake Nasser which is a huge water reservoir.
West Bank tourist sites:
Tombs of the Nobles 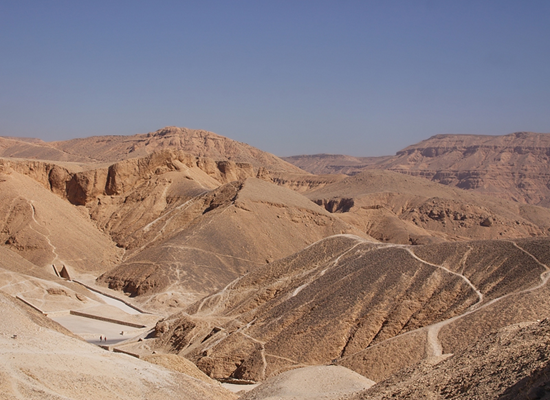 They are carved in the rocks of the west mountain opposite to the north end of Aswan city. They date back to  the 23rd century B.C. Inside the tombs are decorated with vivid murals depicting scenes of everyday life, hieroglyphic biographies and inscriptions showing the noblemen journeys into Africa.
The Agha Khan Masusoleum: 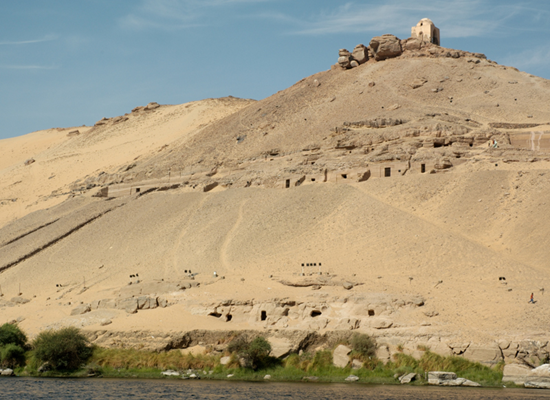 It features a typical architecture of the Fatimid style. Agha Khan was the late leader of the Ismaili sect, who preferred to spend winter every year in Aswan.

The Monastery of St. Simeon:
It dates back to  the 6th century A.D. It is one of the most intact Coptic monasteries which  includes a church, whose frescoes are still extant representing Jesus Christ and the Saints.
Visitors can make tours to Kom ombo and Edfu by feluccas, coach or taxi
Kom Ombo Temple 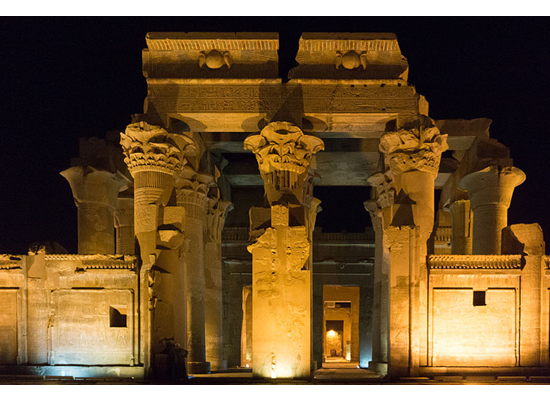 It is located in Kom ombo town, 45 km north of Aswan. It is built on a hillside overlooking the Nile. This temple was constructed in the Ptolemaic Roman era for the worship of god Haroeris and Sobek, the crocodile god.It is noted for relief engravings on its walls which show ancient surgical tools,bone saws and dentistry tools.
Nearby there are three mummified crocodiles.They are now in Hathor's chapel. Near Kom ombo you can go on a visit to camel market held every Tuesday in Draw, where camels brought from north Sudan to be sold.
Edfu Temple
It lies in Edfu town, 123 km north of Aswan on the west bank of the Nile. It dates back to the Ptolemaic period.It was dedicated to the worship of god Horus represented as a falcon. It is one of the most beautiful Egyptian temples,distinguished by its huge splendid structure that blends Pharaonic and Greek architecture.
Its grandeur competes with Luxor temples. It is the second largest temple after Karnak. It also houses the Nilometer and a huge pylon at the entrance. It was discovered in 1860 by the famous archaeologist Mariette. On its walls are reliefs which depict the history of Ptolemy's and reflect religious belief and art style of the period.
Nubia
Once the ancient kingdom of Kush, Nubia houses archaeological sites of great interest: temples, fortresses and tombs.The construction of the high dam posed a great danger of overflooding the temples of Philae, Kalabsha and Abu Simbel.
The Nubians still retain their customs, traditions, language and architecture. One can enjoy a cruise Lake Nasser by boats to explore the new Nubia after relocating the flooded temples.
Temples of Nubia
Temple of Kalabsha 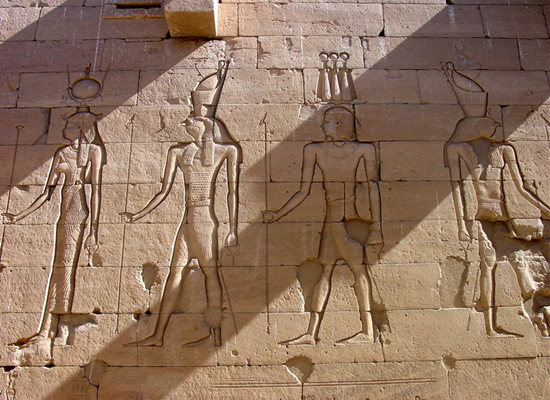 It dates back to  the Greco-Roman era. Built by the Roman Emperor Octavius Augustus and dedicated to the Nubian god Mandolis.
Temple of Beit AL-Wali 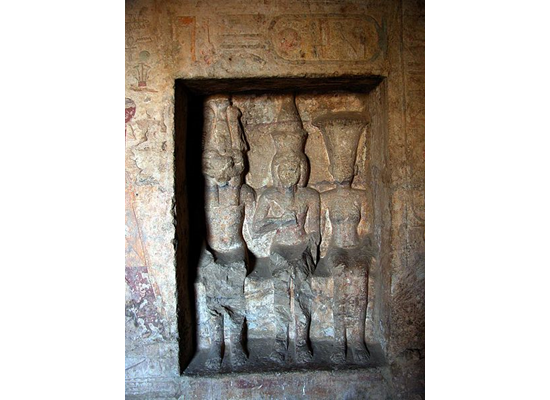 Dates back to the reign of Ramses II. Its walls are decorated with bright coloured reliefs depicting the military victories of the king.

Dedicated to the goddess Isis, with two magnificent Hathohic columns.
Temple of Amada
The oldest temple in Nubia,built by three pharaohs of the Thutmosis dynasty. 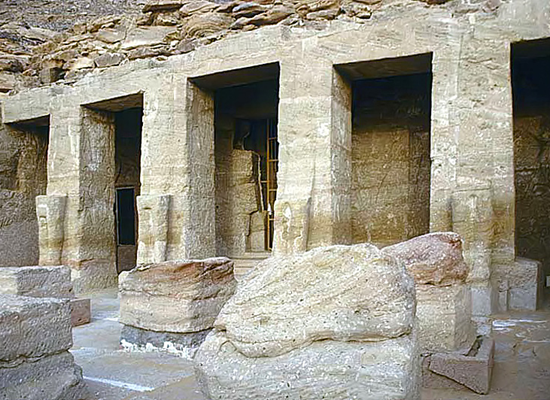 Next to Amada temple,built by Ramses II ,and dedicated to the sun god Ra.
Temple of Penout
The only surviving tomb of an Egyptian viceroy in Nubia.
Kasr Ibrim
The relics of an ancient citadel.
Wadi al-Seboua' Temple
Constructed in the reign of Ramses II for the worship of god Amon.
Temple of Dakka
Built by Amenophis II dedicated to Thot. It was reconstructed in the Graeco-Roman era.
Abu Simbel
Situated 280km south of Aswan, the two temples of Abu Simbel are the most magnificent temples in the world. The first temple was built by the mighty Pharaoh Ramses II,the other for his wife Queen Nefertari. Their relocation is an achievement supported and managed by UNESCO.
The Great Temple of Abu Simbel ( Ramses II ) 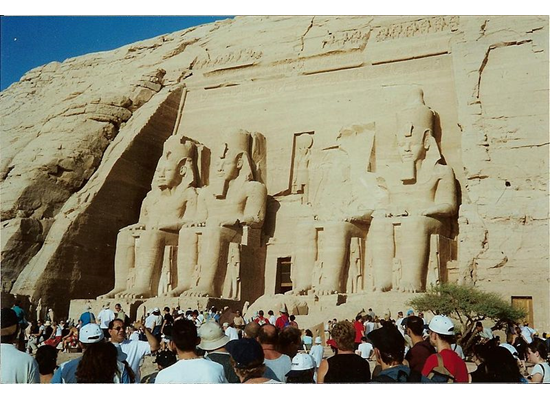 It is built by Ramses II. It is distinguished by its main façade with four colossal statues of Ramses II sit enthroned wearing the double crown of Upper and Lower Egypt. The temple was dedicated to the sun god Ra' Horakhti.The most interesting relic is  the Qadesh battle scene recording his victories over the Hittites. It was built on a strict east –west axis so that the morning sun actually reached the innermost sanctuary at dawn, illuminating the statues of Ptah,Amon,Ramses II,and Ra –Horakhty twice a year.
The Small Temple of Abu Simbel ( Nefertari ) 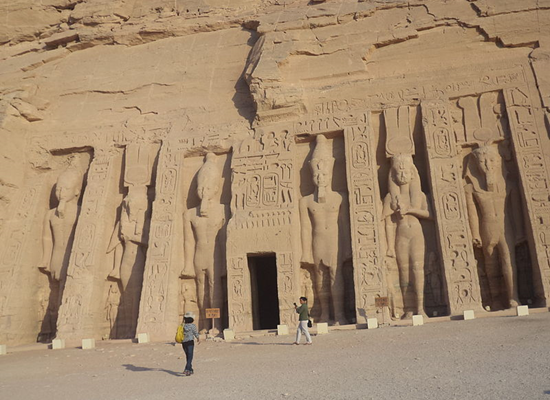 It is located 50 metres from the great temple. It was built by Ramses II for his beautiful wife Nefertari to be worshipped with other gods. It is also called the temple of Hathor, the goddess of love and beauty. Its facade is adorned by six statues  four for Ramses II and two for his wife Nefertari.The walls of the temple are decorated with scenes depicting Ramses and Nefertari offering sacrifices to the gods.
Sound and Light show of Abu Simbel temples
Three daily shows are held in various languages.