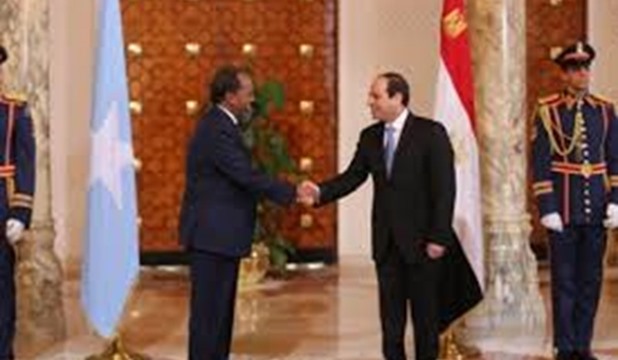 On 29/12/2014: President Abdel Fattah El-Sisi received Somali President Hassan Sheikh Mahmoud at the Presidential Palace. Sisi hailed the historical and close relations between the two countries. Sisi stressed the necessity of boosting bilateral ties in all fields. He reaffirmed Egypt's participation in the regional and international efforts aiming at achieving a political settlement in Somalia. Sisi also referred to Egypt's humanitarian support during the crises period in Somalia, highlighting Cairo's commitment to backing the stability and integrity of Somalia. He also asserted Egypt's keenness to back the efforts of human development in Somalia and training programs to the Somali government staff.

On 10/3/2013: Foreign Minister Mohamed Kamel Amr held talks in Mogadishu with senior Somali officials including parliament speaker, defense minister and foreign minister. The Egyptian minister's visit to Somalia has brought bilateral relations back to normal. Amr has hoisted the Egyptian flag on the Embassy of Egypt in Mogadishu. The Embassy was reopened during Amr's visit to Somalia, the first of its kind in 20 years. In statements on the occasion, the minister said he has decided to reopen the Egyptian embassy in Mogadishu, after the achievement of the country's security and stability, in addition to what has been accomplished since electing Hussein Sheikh Mahmoud as a president of Somalia in September 2012, and forming the new Somali Cabinet.