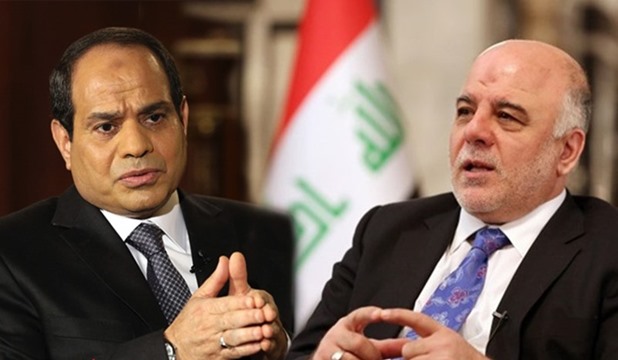 On 27/3/2015, President Abdel Fattah El Sisi held talks with Iraqi President Fuad Masum who arrived in the Red Sea resort of Sharm El Sheikh to take part in the 26th meeting of the Arab summit. Masum reviewed the latest developments in his country, highlighting the progress achieved by the Iraqi national army in face of Daesh terrorist group especially in Tikrit. He asserted that the Iraqi people strongly support the national army against the extremist terrorist groups. For his part, Sisi wished that Iraq could restore stability and security.

On 12/1/2015, President Abdel Fattah El Sisi said Egypt supports the unity and stability of Iraq and denounced all terrorism acts committed by Daesh and other militant groups.
Sisi called In a meeting with visiting Iraqi Prime Minister Haider Al-Abadi for exerting more joint efforts in combating terrorism.
On 17/12/2014, Foreign Minister Sameh Shoukri met Iraqi President Fuad Masoum. Shoukri  arrived in Baghdad  earlier in the day on his second visit to Iraq since assuming post
Shoukri will hand over a message from President Abdel Fattah Al-Sisi to the Iraqi President.
On 11/7/2014, Foreign Minister Sameh Shoukri met with Iraqi Prime Minister Nouri al-Maliki and acting Foreign Minister Hussain al-Shahristani during his current visit to Baghdad.
During the meetings, Shoukri reviewed Egypt's viewpoint concerning the Iraqi crisis, asserting the importance of reaching a national government that includes all Iraqi parties.

On July 6, 2010, Mr. Massoud Barzani, Kurdistan's president visited the Arab Republic of Egypt accompanied by a large delegation of officials from the region.

On July 4, 2010, visit by Mr. Adel Abdul Mahdi, Vice-President of the Republic of Iraq to Cairo, where he met with the Minister of Foreign Affairs and Minister of Investment and electricity.

On 25 to 29 July 2010, a high-level visit by a delegation of businessmen to the Kurdistan region of Iraq, headed by Ambassador Mohamed Qasim Assistant Foreign Minister for Arab Affairs and Prof. Ibrahim Ashmawi Assistant Minister of Investment.

In May 2010 (Cairo), Visit of Ambassador Labeed Abawi, Undersecretary of the Ministry of Foreign Affairs of Iraq to Cairo to attend the preparatory meetings for the second session of the Joint Higher Committee.

On January 24, 2010, the Egyptian Diplomatic Institute organized a training course for 15 Iraqi diplomat.

On December 20, 2009, Iraqi Prime Minister Nuri al-Maliki visit to Cairo and the signing of memoranda of understanding between the Arab Republic of Egypt and the Republic of Iraq.

On 2 to 3 November 2009, The Joint Commission held between the Arab Republic of Egypt and the Republic of Iraq.