A Brief History of Suez Canal 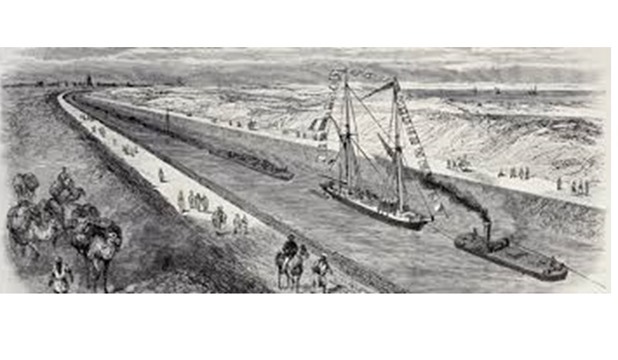 It is recorded that Egypt was the first country to dig a canal across its land with a view to activate world trade.


The Suez Canal is considered to be the shortest link between the East and the West due to its unique geographic location; it is an important international navigation Canal linking between the Mediterranean sea at Port Said and the Red sea at Suez. The idea of linking the Mediterranean sea with the Red sea by a Canal dates back to 40 centuries as it was pointed out through history starting by the pharaohs era passing by the Islamic era until it was dredged reaching its current condition today. 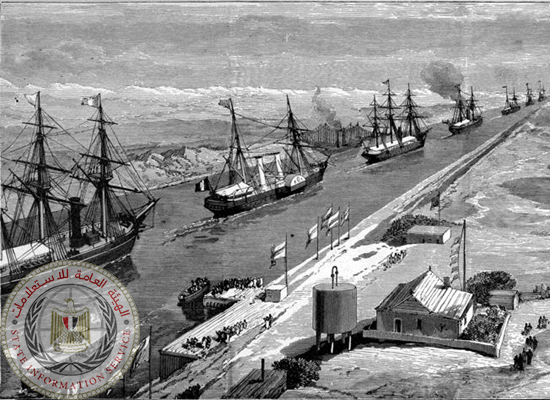 The first canal was dug under the reign of Senausret III, Pharao of Egypt (1887-1849 BC) linking the Mediterranean Sea in the north with the Red sea in the south via the Nile River and its branches.

Under Necho II , a canal was built between the Pelusian branch of the Nile and the northern end of the Bitter Lakes (which lies between the two seas) at a cost of, reportedly, 100,000 lives. However, over many years, the canal fell into disrepair, only to be extended, abandoned, and rebuilt again.


After having been neglected, it was rebuilt by the Persian ruler, Darius I (522-486 BC), whose canal can still be seen along the Wadi Tumilat. According to Herodotus, his canal was wide enough that two triremes could pass each other with oars extended, and that it took four days to navigate. He commemorated the completion of his canal with a series of granite stelae set up along the Nile Bank.


Amr Ibn Elass rebuilt the canal after the Islamic takeover of Egypt linking the Nile to the Red Sea creating a new supply line from Cairo. It was used for shipping grain to Arabia and to transport the pilgrimages to the Holy Land. The canal was stopped up in 767 AD by the Abbasid caliph el-Mansur to cut off supplies to insurgents located in the Delta and to starve out rebels in Medina.


In modern times the Suez Canal is actually the first canal directly linking the Mediterranean to the Red sea.


The first efforts to build a modern canal came from the Egypt expedition of Napoleon Bonaparte, who hoped the project would create a devastating trade problem for the English. Though this project was begun in 1799 by Charles Le Pere, a miscalculation estimated that the levels between the Mediterranean Sea and the Red Sea were too great (estimating that the Red Sea was some ten meters higher than that of the Mediterranean Sea) and work was quickly suspended.


In 1854 the French diplomat and engineer Vicomte Ferdinand Marie de Lesseps succeeded in enlisting the interest of the Egyptian viceroy Said Pasha in the project.


In 1858 La Compagnie Universelle du Canal Maritime de Suez (Universal Company of the Maritime Suez Canal) was formed with authority to cut a canal and to operate it for 99 years, after which ownership would return to the Egyptian government. The company was originally a private Egyptian concern, its stock owned chiefly by French and Egyptian interests. In 1875 the British government purchased Egypt's shares.

The pilot study estimated that a total of 2,613 million cubic feet of earth would have to be moved, including 600 million on land, and another 2,013 million dredged from water. The total original cost estimate was 200 million francs.


Excavation of the Canal actually began on April 25th, 1859, and between then and 1862, the first part of the Canal was completed. However, after Ismail succeeded Pasha Said in 1863, the work was again suspended. After Ferdinand De Lesseps again appealed to Napoleon III, an international commission was formed in March of 1864. The commission resolved the problems and within three years, the Canal was completed. On November 17, 1869 the barrage of the Suez plains reservoir was breached and waters of the Mediterranean flowed into the Red Sea and the Canal was opened for international navigation.


Because of external debts, the British government purchased the shares owned by Egyptian interests, namely those of Said Pasha, in 1875, for some 400,000 pounds sterling. Yet France continued to have a majority interest.


The Canal remained under the control of two powers until Nasser nationalized it in 1956; it has since been operated by the Suez Canal Authority (SCA) .

The Canal was closed to navigation twice in the contemporary period. The first closure was brief, coming after the tripartite British-French-Israeli invasion of Egypt in 1956, an invasion primarily motivated by the nationalization of the waterway. The canal was reopened in 1957. The second closure occurred after the June 1967 War with Israel and lasted until 1975, when Egypt and Israel signed the second disengagement accord.