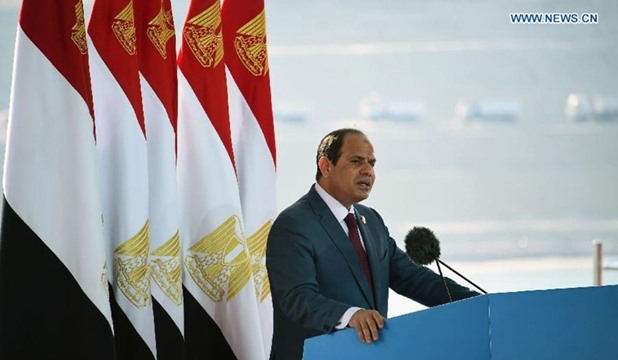 President Abdel Fattah al-Sisi on Tuesday 5/8/2014 addressed the nation on the occasion marking the launching of the Suez Canal development project.


He asserted during his speech that the Egyptians should work hard and with unflagging efforts to shrug off poverty that is gripping the country.


He expressed confidence that Egypt will overcome this current difficult stage through perseverance and assiduity.


He added that Egyptian companies undertaking the implementation of the project are working under the supervision of the Armed Forces. National security considerations are fully observed on this score, he added.


As for financing the project, the President said that the financing is fully Egyptian given the sensitivity of Egyptians towards financing by foreign banks and investors.

He added that the project needs putting up for subscription up to 500 million shares, with the value of each share of Egyptians at home reaching 100 pounds and for Egyptians abroad reaching 100 dollars. Also, a 10-pound share could be floated for young people and university students, he added.


Touching on the regional situation, the President underlined the necessity that all Egyptians should be united given the current situation at the regional level. He explained that the situation in Libya requires Egypt to be vigilant and more cautious and capable of protecting its national security.