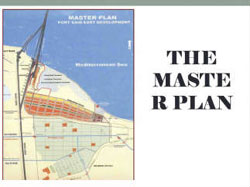 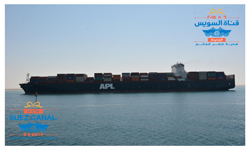 This part of the mega project is under construction (simultaneously with digging the new canal). The tunnels will cost 4.2 billion dollars (approximately about 30 billion Egyptian pounds).

The technology valley will be the first step in starting Egypt's electronics industry for manufacturing technological devices.

Industrial Zone
This project will cover 910 acres of land north west of Gulf of Suez. The first stage of the project covers 132 acres and it is done with a cost of 20 million Egyptian pounds. The second stage is 132 acres and it is not yet done. Currently there are 23 factories operating and 56 still under construction. upon finishing the project it will provide 9386 work opportunities.

New Ismailia City
This project will create "New Ismalliyah City", which will cover 16500 acres of land. This new city will be created to accommodate approximately 500,000 Egyptians in order to relief the pressure from the crowded towns of Cairo and the delta cities. The location of this city is designed to accommodate the workers of the nearby Technology Valley which will be built in following years.

Fish Farming
New fish farms will be built in the eastern side of the Suez Canal. The project is creating 23 tanks that will cover 120 km with 3-5m deeps. It will cover the area from southern Tafrea to Gulf of Suez. This project is designed to produce high quality fish food. The project also includes building a solar panel that will produce Up to 2500 megawatts and reforming 400,000 acres of land in northern Sinai into farming land using the al-Salam Canal

The port covers an area of 2.9 km (the land area is 1.2 km and the remaining 1.7 km is water area). The port contains 37 docks which includes docks for passengers, yachts, and general goods. The port is divided into stations and each station contains a number of docks with its own working area (that includes repairing centers, equipment center, and stores). The maximum capacity of the port is 12 million tons yearly.

Eastern Port-Said Port
Eastern Port-said Port lies on the north western entrance of the Suez Canal branch which is a unique location because it connects 3 continents. The design of the port is geometrically ideal. The port was built in 2004 to serve international trading and act as a transit center between the continents.


The port authority plans to build docks the will reach 12 km long and an industrial zone south of the port covering 78 kilometers squared.

Al-Sokhna Port
Al-Sokhna Port lies on the southern entrance of the Suez Canal and serves a very important location strategically.

The port's total size is 24,919,337.85 meters squared and serves the oil and gas fields in the region. It exports products from the petrochemicals and refining factories in Ein al-Sokhna region. It also exports the products of a ceramic factory, ammonia factory, and a sugar factory.

Arish Port
Arish Port lies on the Mediterranean Sea on the northern coast of Arish city. in 1996 the port was transformed from a fishing port to a trading ships port.

Al-Adabiya Port consists of 9 docks which reach 1840m long and 42–27 foot deep.
In 2014, the Suez Canal Corridor Project Authority announced that al-Adabiya Port will be improved after the completion of the new Suez Canal to serve more ships