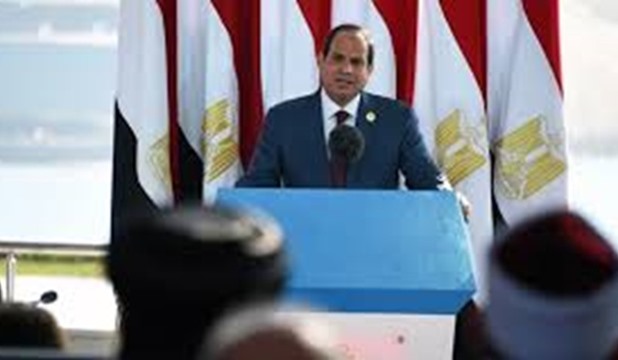 Your Majesties, Excellencies and Highness


Ladies and Gentlemen… the Dear Guests of Egypt..

It is great pleasure for me to welcome you today on behalf of the people and government of the Arab Republic of Egypt. I welcome the loyal brothers of Egypt and its sincere friends who are sharing its great people their jubilation over their historic achievement. The Egyptian people proved through this achievement that they are capable of making history and crossing to the future for the prosperity and progress of the whole humanity.


Allow me at this point just to steer away from the written text. I am talking to you today as an Egyptian who is proud of the greatness of his country and its ancient civilization that is being included in the curricula in several world countries, so that these countries would be inspired by the values that were established by this great civilization. And today we have Egypt presenting to the world its gift not only for the Egyptian people alone but also for the humanity at large and for development and construction as well. Egypt did not only present to the world over the past two years this new canal but its contribution has reached other vital domains. History will register for Egypt and its people that they have stood against the most dangerous terrorist and extremist thought which if had a chance would have scorched the land. Egypt and its people have also contributed to establishing the moderate values of Islam through Al Azhar and its reverend scholars who have actually contributed to renewing and rectifying the religious discourse.


The Egyptian people have achieved the project of the new canal under very difficult conditions at the economic and security levels where the powers of terrorism and extremism were fighting Egypt and the Egyptians. Even though, we managed through the providence of Allah and through the strenuous efforts of the Egyptians, to overcome these conditions and achieve the dream.


The greatness of the new canal is not that it is a remarkable engineering achievement, but also because it has granted the Egyptians more confidence and attested to the whole world the ability of Egyptians to work and achieve. The new canal is the first step along a road the Egyptians have already started to take for achieving their hopes and aspirations.

The secret behind the greatness of the Egyptians and their power is in their unity and solidarity. And here we see the reverend Grand Imam of Al Azhar sitting next to the reverend Pope of Alexandria as an expression of the unity of the Egyptian people.

I would not miss on this occasion the opportunity for extending all thanks to the souls of the martyrs of Egypt who sacrificed their lives and blood for the sake of this nation and for establishing its stability. They have made this sacrifice not only for Egypt but also for the whole humanity. I would like also to extend all thanks and appreciation to the Armed Forces Engineering Authority and Suez Canal Authority along with the consortium of dredgers and contracting companies who took part in achieving this great project on time.


We the Egyptians have promised the whole world to offer them the gift of the new canal. And here we are fulfilling our promise in a record time. We are offering the world an additional lifeline for prosperity and a channel of interaction among the peoples of the world to contribute to facilitating and promoting international navigation and opening new horizons for development. The new canal also participates in achieving the hopes and aspirations of the great Egyptian people who achieved this project through the minds, hands and funds of its sons.


We are inspired by dear Sinai; the meeting point of East and West, from the blessed land of Egypt and its kind-hearted people, from its greatness which is like the pyramids, from the ingenuity of its distinguished location throughout history, from its eternity like its Nile and from the annals of humanitarian history. We are inspired by the pages of honor and glory that were written by our grandfathers. And here we are writing in the pages of the future a unique approach for new Egypt that is achieving the aspirations of its sons and coping up with their struggle that has been maintained throughout humanity.

The Suez Canal has always been part of the Egyptian pulse. Therefore, it has been the focus of its thinkers and intellectuals. The great Egyptian thinker Gamal Hemdan is describing it saying "We have to rest reassured despite all challenges and hindrances that the future of the Suez Canal is bright as it has never been before provided that we become up to the level of the challenge and stand up to danger through our vigilance, determination and maintained planning together with hard work". Today, the prophecy of Gamal Hemdan is achieved and becoming a new reality that runs flowing on the water of this canal.


Allow me to send a message of appreciation to the people of my country who proved day after another that the contribution of the sons of Egypt never runs out. Sons of Egypt, I salute your patriotism. You have responded to the call of the homeland and you have managed to finance this great achievement in a few days. Let us all dedicate this great achievement to the souls of the honorable martyrs of Egypt. We tell them all that your sacrifice has never been in vain and your defense of your nation and people was not only for defending the homeland but also for granting hope to the coming generations that will eventually become aware of your history and experience and will learn from you the meaning of sacrifice and altruism. So, rest in peace in paradise. I would not also miss the opportunity for extending all thanks and appreciation to everybody who contributed through his mind and effort to achieve their impressive achievement.

Launching navigation in the New Suez Canal and achieving it at this unprecedented pace surpasses the achievement of economic and political goals. It highlights a humanitarian goal that is sought by Egypt of the future to attain for its people dignity, justice and stability within the framework of a modern and civil democratic State through resorting to the Egyptian capabilities for building and achieving at high paces in all domains.


The current phase of construction requires creating the propitious atmosphere for work and investment. The men of the Armed Forces and civil police were in the vanguard of the Egyptian ranks who were working with sincerity and assiduity in the face of blind terrorism that is lurking in the dark for Egypt and its people and is seeking to impose on the Egyptians its backward ideas. The determination of the Egyptian people was capable to defeat terrorism and was stronger than its violence and hatred.


History will recall to humanity at large how the Suez Canal was a launching pad for cultural and civilizational illumination by Egypt to the region and the whole world. The Suez Canal is the point of contact of all four corners of the globe starting with the pharaonic age passing through the Greek rule and the Islamic era and then modern history ending with our new canal. Egypt will remain the converging point of East and West as it has always been throughout history.

The Egyptian people are announcing to the whole world today the message of the New Suez Canal to the effect that we will defeat terrorism through building life and we will defeat hatred through spreading love. Let the canal be an area of prosperity for all humanity not only over its water but also on its banks in a way that is up to the high status of the history of this canal that has left its mark on the geography of existence itself and the map of humanity. I confirm to you that Egypt is not the country of one project and should never be. Its young people are similarly in need of work and capable of creativity and innovation at the same time. The inauguration of our new canal today is only marking the launch of several national projects. One of the most related projects to our achievement today is the project of Suez Canal zone development. The general plan of the project has already been approved and the government will immediately work for implementing East Port Said development and upgrading project that involves expanding East Port Said harbor and upgrading it along with developing the industrial hinterland of the port and improving the infrastructure of the area together with connecting it to other projects that are underway. This project will be followed by the development of the areas of Ismailia, Qantra and Ain Sokhna.


The development of the canal area is aimed at creating an international economic zone including several ports, new cities and trade and logistical centers. This will achieve higher rates of trade exchange between Egypt and all world countries. We are working on achieving our goal. We are also looking for the participation of our friends from all the world in our ambitious dream of building an Egypt of the future where several projects are launched with a view to creating a national network of giant roads, starting agricultural development through reclaiming one million feddans and setting up new cities to cope up with the population increase. These projects also include industrial expansion through encouraging small and medium scale enterprises. I confirm to you all that the Egyptian State is renewing its determination to forge ahead along the road of political and social reform to attain the goals and aspirations of its sons for social justice and human dignity.

Allow me to extend all greetings and appreciation to you. I thank Allah for helping us to achieve this great dream which enhanced our motive to accomplish more achievements for our dear Egypt; this great nation that entrusted me with the responsibility of leading it. This nation deserves from us more sacrifices to attain our goals. This nation is waiting for us all; young and old, men and women and Muslims and Christians, to work hard with sincerity while committing to our principles and values


Egypt which restored its will during the January 25 and June 30 Revolutions, has chosen its road and enlightened its path. Although it did not achieve all its dreams; yet it is well aware of all what it wants and is forging ahead along the road of achieving it. If all peoples are capable to dream, only free peoples are capable of achievement.

In the Name of Allah and with the providence of His Almighty, we Abdel Fattah El Sisi, the President of the Arab Republic of Egypt, gives the go-ahead of starting the operation of the New Suez Canal.

Long live the principles of humanity and the values of tolerance and co-existence.

May peace and blessings of Allah be upon you all.