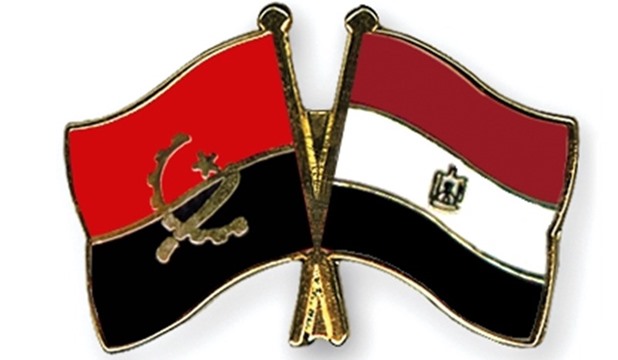 Relations between Angola and Egypt date back to the 1960s, when Angolan nationalists were struggling for their independence. In 1976, Angola opened the Angolan Embassy in Egypt

The historical relation between the two countries is characterized by being durable and strong. The relation has not witnessed tension in any stage since Angola's independence. This political relation dates back to 1965 when the Popular Movement for the Liberation of Angola party (MPLA) has inaugurated the first regional office in Cairo under the chairmanship of Foreign Minister to coordinate with the Egyptian side for supporting the Angolan liberation movements against the Portuguese occupation.

In this regard, the Angolan President Jose Eduardo dos Santos, in more than one occasion, expressed his deep gratitude to Egypt for its support during the period of Portuguese occupation, as well as during the Angolan civil war, which lasted for more than 27 years.

Angola is keen to develop its relations with all African countries, including Egypt, to promote economic and social development.


- On 15/8/2018, the Minister of Energy and Water of Angola Joao Baptista Borges and his accompanying delegation visited Egypt. They were received by Minister of Electricity and Renewable Energy Mohamed Shaker to discuss ways to support and enhance cooperation between the two countries in the field of electricity and renewable energy.

-  On 25/2/2017, Foreign Minister of Angola Georges Chicoti visited Egypt to attend the high-level meetings on the Great Lakes region issues. He was received by Foreign Minister Sameh Shoukry. The two sides discussed means of developing bilateral relations in all fields.

- In January 2018, President Abdel Fattah El Sisi conferred with Angola’s President Joao Lorenzo at his residence in Addis Ababa. The President stressed Egypt’s keenness to develop bilateral relations with Angola on all fronts, especially increasing trade exchange and exploring mutual investment opportunities to achieve the interests of mutual concerns. The Angolan President expressed during the meeting his country’s appreciation for bilateral ties with Egypt, stressing his aspiration to work with President El Sisi during the coming period in order to improve cooperation between the two countries.

- In January 2010: Head of National Council for Sports has paid two official visits to Angola to attend the opening and closing ceremonies of the African Nations Cup, "Angola 2010".

- On 6-9 November 2009, an Angolan delegation comprising a number of deputy ministers, headed by the Angolan Minister of Planning Ana Dias Lourenco, participated in China-Africa Forum, which was held in Sharm el-Sheikh.

- In April 2009, the Angolan Minister for Territorial Administration visited Egypt, heading a high-level delegation to discuss with his Egyptian counterpart the Minister of Local Administration, bilateral relations between the two countries.

Egypt and Angola are keen to promote economic cooperation by using the distinguished political relations to establish tangible commercial, industrial and investment projects serving the Egyptian and Angolan economies. Egypt supports the Egyptian investments in Africa and vice versa, the work to develop and address the issues of the continent through constructive and brotherly communication and the economic development in Africa.

The role of the Egyptian private sector in Angola is highlighted through the projects carried out by Elsewedy Electric Company in Angola. The company implemented three 150 MW power stations using 6 mobile turbines. There are two stations in Luanda and the third in Huambo. Elsewedy has been in Angola since October 2015 until now, as the company continues to operate and maintain the three stations. The three stations are among the latest technology used in Angola.

Angola is keen to intensify cooperation with Egypt in the oil sector; Angola has considerable experience and can be shared with Egypt through its experience in this sector which puts Angola in the forefront of crude oil production in the African continent. The cooperation in this sector between the two countries contributes greatly to achieve sustainable development of the two countries.

Angola participated in the Intra-African Trade Fair in December 2018 with 24 exhibitors and 60 businessmen. Angola's participation was the beginning of a new phase of distinguished economic relations with Egypt.

Angolan companies mobilized $ 450 million at the Intra-African Trade Fair (IATF, 2018) hosted by Egypt from December 11 to 17, 2018. This amount is the result of the projects submitted by the companies concerned, trade exchange and agreements signed by Angolan businessmen during the first trade fair of its kind in Africa. This amount is directed to the Angolan Energy Company by the value of US$400 million, the National Association of Manufacturers and Wood Industry (ANIMA) by the value of US$200 million and the Women and Enterprise Union of Angola (FMEA) by the value of US$50 million. At the exhibition, the Minister of Trade chaired the Angolan delegation with more than 100 participants, including 22 companies took advantage of the event to make contacts with their counterparts from Egypt and other African countries, as well as more than 30 companies.

On December 13, 2018, Angola’s Trade Minister Goker Gan met Minister of Trade and Industry Amr Nassar, on the sidelines of the seventh meeting of African Union Ministers of Trade (AMOT) hosted by Egypt in the presence of 54 countries. During the meeting, he stressed the need for all African countries to unite to create an industrial boom that preserves African resources and contribute to the transformation from the export of raw materials to the export of finished goods, which will lead to high growth rates for all African economies.

On August 15, 2018, Minister of Energy and Water of Angola Joao Baptista Borges and his accompanying delegation visited Egypt. They were received by Minister of Electricity and Renewable Energy Mohamed Shaker to discuss ways to support and enhance cooperation between the two countries in the field of electricity and renewable energy. Egypt, Angola sign Memorandum of Understanding (MoU) on energy cooperation to promote investment and energy cooperation. Under the agreement, Egypt will provide technical support to build solar power plants in Angola’s remote villages as well as exchange expertise in renewable energy. The MoU also included the organization of administrative and technical programs and special training courses in the fields of energy rationalization and efficiency and lost power, the support of Angola’s Electricity Regulator Authority and the restructure of electricity price.

Five Egyptian companies participated for the first time in the International Fair of Luanda (FILDA) in July 2009; they exhibited models for some of their products. The most important of these companies were Qena Cement Company, El Qasr Furniture and others for real estate plastic equipment.

The volume of trade exchange between the two countries is represented in a few irregular transactions by a group of Egyptian companies such as Elsewedy Cables, which sent a delegation from the company to Luanda in July 2009 to discuss the export opportunities of the company's products to Angola, and some other industrial and commercial companies in a number of Areas.

In Luanda, there are many other Egyptian goods and products (specially canned food and drinks) which were imported indirectly by the current Lebanese traders in Angola, or directly through some of the Egyptian companies that are trying to discover the Angolan market.

On November 26th, 2010, the first agreement on air services between Egypt and Angola was signed with initials, and a Memorandum of Understanding between the Egyptian and Angolan Civil Aviation Authorities was signed as well.

The participation of the Egyptian football team in the African Cup of Nations Championship that was hosted by Angola in January 2010 (CAN 2010) marked a significant impact on reinforcing and furthering sports and cultural relations between the two countries "on an official and popular level", as the Angolan TV broadcasted many cultural programs about the history of modern Egypt and it’s Ancient civilization besides focusing on the famous Egyptian touristic shrines by the Angolan media.

The participation of the Angolan Handball team in the African cup of Nations Championship for Handball that was held in Cairo, " in February 2010”, and the culmination of Angolan women's team in this tournament by the title has left great impressions about Egypt on the Angolan’s passion.

The participation of the Angolan team for Folkloric Arts in the Folk-Art festival organized by the African sector of the foreign ministry, in collaboration with the Egyptian Ministry of Culture "May 2009" in commemoration of the Day of Africa - 25th of May every year.