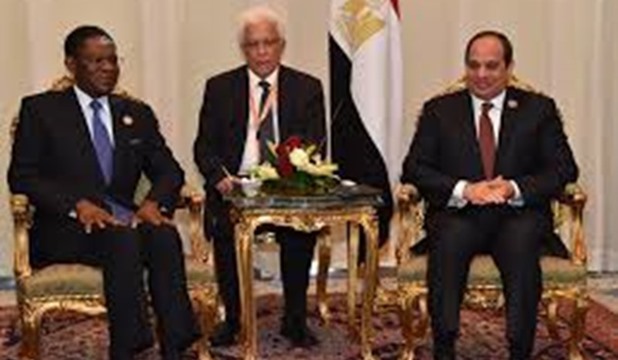 Egypt and Equatorial Guinea signed on 9/5/2014 four contracts on joint cooperation in economic domains. Also the delegation accompanying Mahlab during his visit included the ministers of foreign affairs, agriculture, oil, health and housing. The Egyptian ministers held talks with their Guinean counterparts on means of boosting joint cooperation as follows:

First: In the housing domain

The two sides reached an agreement on enhancing cooperation for setting up a center of quality control of building materials in Guinea in cooperation with the Egyptian National Center for Housing and Building Research. The Egyptian Arab Contractors company will take over setting up the building of the center at the expense of the Guinea government. Egypt will provide the expertise for running the center and training Guinean staffers.

• Setting up a medical center in Guinea by the Arab Contractors company with the Egyptian Health Ministry supplying it with doctors in different specializations.
• Putting forth a project that could be carried out by Egyptian contracting companies including:
1. A project for setting up 1,000 housing units similar to that the Arab Contractors company has established in Guinea.
2. Setting up a project of 500 housing units in Liberia to be financed by Guinea.
3. Setting up a headquarters for the Energy
4. Ministry in Guinea
5. Setting up a headquarters for the Guinean embassy in Nigeria

Second: In the health sector

• Discussing the activation of a memorandum of cooperation that was signed by the two countries.
• Discussing cooperation in the fields of preventive medicine and programs for combating endemic and epidemic diseases such as malaria.
• Supplying Guinea with its needs of doctors through the Egyptian fund for technical cooperation with Africa, an offshoot with the Egyptian Foreign Ministry.

Third: In the agricultural domain

• The two sides have discussed the details of a draft memorandum of understanding that would be signed by both countries in the field of agriculture including setting up a joint farm for producing seeds and adopting modern irrigation and sewage methods.
Fourth: In the domain of oil and mineral resources
• The two sides discussed proposals for cooperation in the fields of oil and natural gas with Egypt offering its potentials in the domain of transport networks and infrastructure.
• Reviewing the possibility of importing liquefied gas from Guinea
• Reviewing the possibility that Egypt would train Guinean workers in the field of oil and natural gas along with mineral resources.