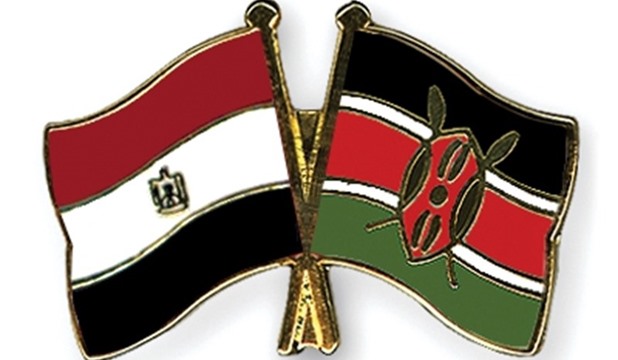 The historical relations between both countries began before the independence of Kenya, as Egypt during the time of Gamal Abdel Nasser, provided support to the Kenyan Mau Mau movement through a diplomatic and media campaign focused against the British occupation of Kenya. Furthermore a radio channel from Egypt in the Kiswahili language- the first of its kind in Africa- named " the voice of Africa" was first broadcasted from Egypt to support the Kenyan people in their struggle to liberate their country.

Egypt helped also turn the issue of supporting the Mau Mau movement and the release of Jomo Kenyatta into an African and an international issue, as Cairo was the first capital to open its doors to Kenyan national leaders and give them all possible assistance to revitalize their movement inside Kenya. And among those leaders who visited Cairo during this period were Oginga Odinga, Tom Mboya, James Gichuru, Joseph Murumbi and others such as members of the ruling Kenya African National Union "KANU" and the Kenya African Democratic Union "KADU" which opened two offices in Cairo during this period.

During the past decade, Egypt continued its policy to support Kenya, and provided the necessary assistance in times of crisis and during natural disasters such as droughts and floods, and this was achieved through the provision of food aid, medical and technical assistance to support the Kenyan people.

Through its Egyptian Fund for Technical Cooperation with Africa affiliated with the Egyptian Ministry of Foreign Affairs, Egypt has also provided and through other Egyptian institutions technical cooperation assistance in the areas of agriculture, water, livestock, fisheries, health, communications, security, and capacity building, and in many other fields.