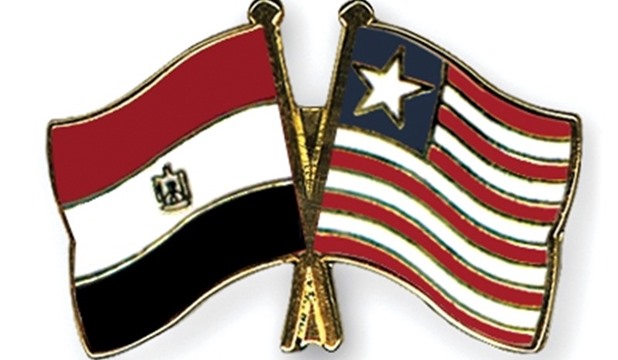 Despite the idea of the Civil crisis that hit Liberia and lasted for 14 years and ended in 2003, and affected the size of commercial relations between Egypt and Liberia, The Egyptian Embassy in Monrovia, and since the Opening of its new premises in July 2009, works hard on pushing these commercial ties and opening markets on both sides.

The Ambassador of the Arab republic of Egypt met with the Liberian minister of Commerce, director of the Liberian National Investment Council, high board of the Liberian Commerce Chamber, and the businessmen association, and the Folah business men syndicate, in order to introduce to them all to the Egyptian products and Investment in Egypt, and invited them to visit Egypt to Import.

The Egyptian Embassy is currently preparing for a visit for her Excellency minister of foreign affairs accompanied by Director of the Liberian National Investment Council, along with a group of Liberian businessmen from the Liberian Commerce Chamber to visit Egypt in October 2010.

Egyptian businessmen visited Liberia in 2010 and the Egyptian Embassy encouraged them to invest and open new channels in the Liberian market while being cautious regarding financial issues.

• The Egyptian Liberian Relations started in 1957, when both countries started diplomatic ties, in 1959 the first ever Egyptian Ambassador arrived to Monrovia, while all the bilateral agreements signed between both countries was during the 1980s and are the following;
• Commercial Agreement signed on March 11, 1982, valid for a year and automatically renewed unless one of the parties decide and inform the other party otherwise.
• General agreement on economic and technical cooperation signed on March 11, 1982 signed between foreign ministers of the two countries, valid for 5 years, and is renewed annually automatically, unless one of the parties inform the other about his willingness to terminate the agreement in a written form 6 months before the renewal.
• Agreement with the Egyptian Fund for Technical Cooperation with Africa in 1982.
• Executive program for cultural and Science cooperation in 1982.
• Agreement to establish a permanent committee for bilateral cooperation signed on February 18, 1990, same year of the beginning of the Liberian civil war, and no documents available to prove if it was ratified.
• MOU to encourage commercial exchange and economic cooperation between two countries, signed by a delegation from the Egyptian Commercial Service that visited Liberia in 1998.
• Agreement with the Egyptian Fund for Technical Cooperation with Africa in 2001
• Egypt suggested signing a brotherly agreement between the city of Cairo and the city of Monrovia, to cooperate in the cultural, educational, technical, touristic sectors, and to exchange visits, and participating in each festivals organized by each city.