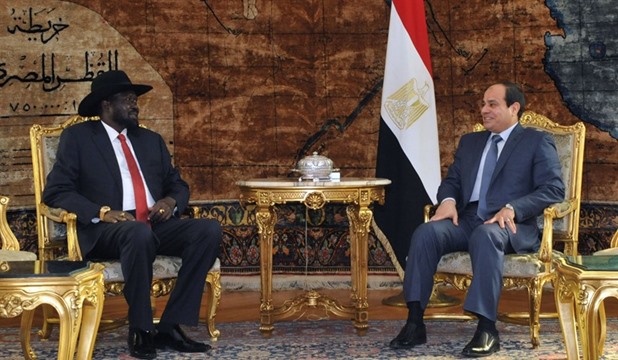 On 24/2/2015, Minister of Water Resources and Irrigation said that Egypt and South Sudan embarked on an international campaign to attract investments to fund the multi-purpose Wau dam in the Wau city, Western Bahr el-Ghazal State. Egypt is finalizing studies on the dam to be referred to the South Sudanese government.

On 16/12/2014, Egypt and South Sudan have agreed on drawing up an integral executive program to support development projects in South Sudan in the fields of health, urban planning and water resources. Irrigation Minister and South Sudanese Minister of Cabinet Affairs Martin Elia Lomuro reviewed ways to enhance cooperation and partnership and activate agreements that had been already reached during the recent visit to Egypt by South Sudan President Salva Kiir.

On 22/11/2014, Egypt and Sudan signed an agreement on cooperation in the technical field and development of water resources.

On 27/10/2014, Prime Minister conferred with visiting South Sudan Minister of Electricity and Dams Jemma Nunu Kumba on means of bolstering cooperation between Egypt and South Sudan in all fields.

On 27/10/2014, Minister of Water Resources and Irrigation received his South Sudanese counterpart Jemma Nunu and conferred on ways to boost bilateral cooperation in all fields regarding water resources, irrigation and joint projects aiming at serving the common interests of both countries.

On 12/8/2014, Minister of Industry and Trade held talks with South Sudanese Ambassador to Egypt Anthony Kon to discuss ways to increase economic cooperation and the trade exchange volume during the coming period.

On 20/4/2013, Egypt and South Sudan signed contracts for implementing three ventures in South Sudan by the Arab Contractors, at an Egyptian grant of $ 7.2 million.

On 28/3/2011, Prime Minister wound up his visit to Khartoum and headed for the southern Sudanese city of Juba. He expressed thanks to the Sudanese government and people for the warm welcome they gave him, saying Egypt will cooperate with North and South Sudan to serve the interests of their peoples. He said Egypt will continue offering assistance to South Sudan and train its cadres in this important stage.

The Egyptian and South Sudanese officials discussed means of boosting Egyptian presence and investments there.