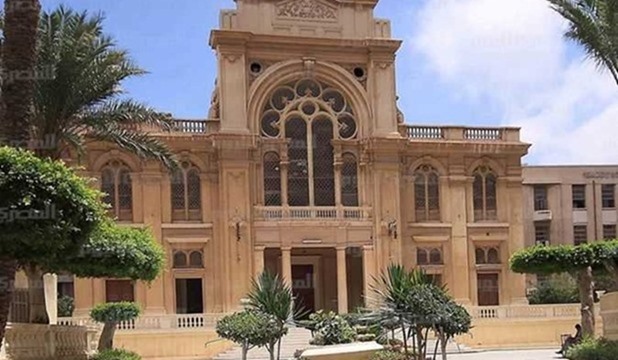 About 150 years ago, communities and sects of different races lived in Egypt in general, and in Alexandria in particular. Their blood, cultures, customs and traditions fused in a single crucible and in a distinct human fabric that grew up and developed under the tolerant cloak of Alexandria. They'd brag about their identity, derived from the shades of that cloak.

These communities and sects lived side by side with the Alexandrians, and yet each community and sect maintained its customs, language, social life, religious practices, rites of worship, history, and even their cemeteries. Although, French was the official language among these communities, as it played a fundamental role in uniting them, most of them knew something of Egyptian colloquialism by virtue of direct daily friction.

The Jewish community in Alexandria is a strong example of this situation, as Jews enjoy their full freedom to practice their religious rituals and build their own synagogues. The Egyptian government supported them through facilitating the construction and giving them land for free, which contributed to the spread of Jewish synagogues in Cairo and Alexandria. Until 1930 there were 20 synagogues in Alexandria belonging to different races and societies among Moroccan, Turkish, Italian, Spanish, French and Arabized Jews. The sect had a general assembly consisting of Hakham Bashi "Chief Rabbi", the deputy rabbi, a president, his deputy, and a secretary. The sect was based in El-Nabi Daniel Street at "Eliyahu Hanavi Synagogue”, one of the oldest and most famous synagogues Alexandria. Built in 1354, it was bombed by the French during their invasion of Egypt by order of Napoleon to establish an artillery barrier between the fortress of Kom el-Dikka and the sea, and was re-built in 1850 with contributions from the Muhammad Ali Dynasty.

The features of the Jewish community in Alexandria modern history were formed at the end of the seventeenth century, when a group of poor Jewish fishermen moved from Rashid and Edko, to Alexandria to join a few hundred hard-case Jews.

These arrivals set up tents in “Al Anfoushi” District along the beach and in “Al Sayadeen” street near the old fish market, later these tents became shacks, which turned into houses, after which they became the Jewish Quarter in Alexandria, which extends from “Hosh Al-Najjar”, “Hosh Al-Jaan”, and “Hosh Al-Hanafi”, to the square and Street of France.

Over time, Alexandria attracted more Jews from Cairo, Delta, Morocco, Iraq, Turkey and Spain, because of the massive economic recovery that it witnessed and its openness to the west markets.

Middle-class Jews resided in “Muharram Bek” neighborhood, where the first Jewish hospital was built in 1893 with the efforts of “Baron Jacques de Menashe”, which known now as the “Al Ramad Hospital”.

There are also two shelters for elderly Jews in “Paulino” and “Rusafa” streets, along with many schools and temples, While the bourgeois- class Jews resided in the city center near the El-Nabi Daniel Street.

Among the synagogues in Alexandria is the “Mansheh” temple, founded by “Al Baron Jacob de Menashe” in 1860 in “Mansheya” Square, it’s a simple two-storey building.

There is also “Eliyahu Hazan” temple on “Fatma Al-Youssef” Street in “Sporting” neighborhood that was established in 1928 and “Green” Temple, which was constructed by “Green family” in “Muharram Bek” In 1901.

“Jacob Sasson” Temple was also established in 1910 in “Glim”, the “Castro Temple” that Musa Castro established in 1920 in “Muharram Bek” neighborhood, the Ashkenazi Israel “Nizzah” Temple in 1920, the “Tafilah Logo” temple founded by the “Anzarot” and “Sharpee” families in 1922 in “Camp Caesar” neighborhood.

These are all beside some temples that were destroyed and ceased to exist.

The famous Jewish neighborhood was a living example of Jews’ conditions in Alexandria and their integration with its people.

It starts from “Customs District” in “Bahri” to the neighborhood of “Al-Manshiyya”, and it is not a quarter as commonly known, but it’s a neighborhood in which there are many streets and quarters connected to each other, inhabited by Jews, Christians and Muslims.

This neighborhood retains its architectural character, its middle and poor class residents, as the working class of the Jewish community inhabited it, and they were often from Egyptian born and nationality Jews, whose Arabic was their language, and were keen on establishing friendly relations with their Muslim and Christian neighbors.

El-Nabi Daniel Street is one of the most important streets of Alexandria which is named after a prophet of Judaism. The street dates back to the sixth century BC when Alexander the Great planned the city on the Hypodermic style being two intersecting streets at the right angle, and then planning the streets of other sub-parallels with each of the streets, which makes the area like chess pieces and public squares of the assembly in front of the landmark buildings*.

‘El-Nabi Daniel ‘street is a part of the long main street that extended from the north of the city to its south.

On this street there are many important city heritages. Down the street, there are the Prophet Daniel Mosque, the Jewish Temple, and St. Mark's Church, which is one of the oldest churches in Egypt and Africa. El-Nabi Daniel Street is one of the most vibrant streets in Alexandria with important stores and buildings like the Al Ahram news agency and the French Cultural Center.

Egypt is a tourist country that combines many antiquities from different eras. The restoration of antiquities in order to preserve them is one of Egypt’s goals, especially the one aiming at reviving the tourism movement as well as keeping an abundant part of the world heritage represented by the Egyptian antiquities.

In this context, the Egyptian Ministry of Tourism and Antiquities is restoring the Egyptian antiquities according to a plan that has been included at the projects sector in the Ministry, however, the restoration process is currently limited to the registered monuments only.

Egypt is a touristic country thus grouping numerous of antiquities belonging to different ages. The restoration of antiquities with the aim of preserving them comes within the framework of the Egyptian State’s strategies, particularly in light of its importance to revive the touristic movement. Also, this effort show how the State pays attention to protect the antiquities as they are integral part of the world heritage.

The wooden part “Shukhshekha” at the top of the women’s oratory suffered from partial collapse because of rains experienced by Alexandria in winter, the matter which led to a temporary closure of the synagogue until finalization of its restoration. The synagogue is now ready to appear in a new look.

The inside shape of the building is rectangular. The building is constructed in the Italian style and consists of two floors. It includes about 28 columns surrounding seats with a small copper panel on which the names of the Jewish attendees were engraved. The structure is made of marble and is located in the middle of the east side after the prayer and preaching platform. On both sides of the structure, there are two entrances: the first is at the south direction, and it leads to a room comprising a wooden cupboard containing a number of writings, and the second is at the north and leads to a wooden staircase leading to the ladies' chapel on the upper floor.

It was announced that the restoration works, including the construction support work, the architectural and delicate restoration of the main facades and the decorated walls as well as the wooden and copper elements in addition to upgrading the modern lighting systems, security and alarm systems, have been completed, in preparation for the inauguration in January 2020.