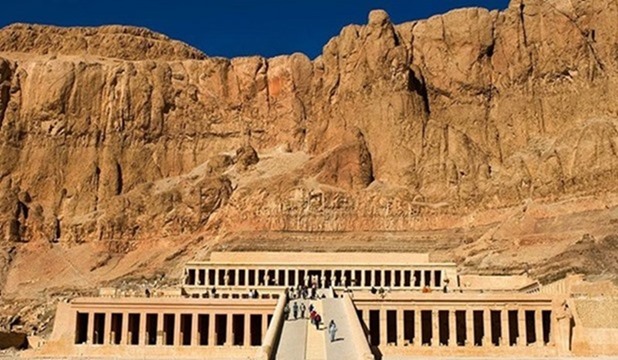 Hatshepsut (1507–1458 BCE) was the fifth pharaoh of the Eighteenth Dynasty of Egypt. Hatshepsut was the daughter and only child of Thutmose I and his primary wife Ahmose. Hatshepsut became queen of Egypt when she married her half-brother, Thutmose II, around the age of 12. Upon his death, she began acting as regent for her stepson, the infant Thutmose III, but later took on the full powers of a pharaoh, becoming co-ruler of Egypt around 1473 B.C. As pharaoh, Hatshepsut extended Egyptian trade and oversaw ambitious building projects, most notably the Temple of Deir el-Bahri, located in western Thebes, where she would be buried. Depicted (at her own orders) as a male in many contemporary images and sculptures, Hatshepsut remained largely unknown to scholars until the 19th century. She is also known as "the first great woman in history of whom we are informed." Hatshepsut was the longest reigning female pharaoh in Egypt, ruling for 20 years in the 15th century B.C. She is considered one of Egypt's most successful pharaohs.

Hatshepsut Khenmet-Amun, which means “the united of Amun in front of the Nobles,” was one of the New Kingdom queens, and the best known of the women who ruled Egypt as pharaohs. She was the daughter of king Thutmose I, the third king of the 18th Dynasty (1525-1516 BC), and her mother was Ahmose Hetep Temhu. She was married to her step brother, King Thutmose II, who held Egypt’s throne from 1516-1504 BC. They had a daughter called princess Neferure. Thutmose II died young, around 1479 B.C., and the throne went to his infant son, also born to a secondary wife. According to custom, Hatshepsut began acting as Thutmose III’s regent, handling affairs of state until her stepson came of age. They ruled happily for two years, and then she declared herself Egypt’s king and pharaoh.

Hatshepsut’s divine birth
To strengthen her position as pharoh, Hatshepsut invented the myth about her own divine birth which is shown in scenes on the walls of her temple at Deir el-Bahari.

Under Hatshepsut’s reign, Egypt prospered. Unlike other rulers in her dynasty, she was more interested in ensuring economic prosperity and building and restoring monuments throughout Egypt and Nubia than in conquering new lands.

She built the temple Djeser-djeseru ("holiest of holy places"), which was dedicated to Amon and served as her funerary cult, and erected a pair of red granite obelisks at the Temple of Amon at Karnak, one of which still stands today. Hatshepsut also had one notable trading expedition to the land of Punt in the ninth year of her reign. The ships returned with gold, ivory and myrrh trees, and the scene was immortalized on the walls of the temple.

Zahi Hawass, Egypt's chief archaeologist said that the discovery of the Hatshepsut mummy is one of the most important finds in the history of Egypt.

Hawass decided to re-investigate the mystery surrounding Hatshepsut for a television special to be aired by the Discovery network and his team removed the second sarcophagus to Cairo for a CT scan.

The scan revealed that this mummy was an obese woman between the ages of 45 and 60 who had bad teeth. She also suffered from cancer, evidence of which can be seen in the pelvic region and the spine.

In search of more clues, Hawass suggested a CT scanner be used to examine artifacts associated with the queen. One of those was a small wooden box that bore the cartouche, or royal seal, of Hatshepsut and contained a liver.

The CT scan also revealed a tooth in the box. Hawass called in a dentist who studied the scans of the tooth and of several female mummies.

"Not only was the fat lady from KV-60 missing a tooth but the hole left behind and the type of tooth that was missing were an exact match for the loose one in the box," Hawass said.

The exact dimensions of teeth are unique to each mouth. The molar tooth in the box fits within a fraction of a millimeter with the space of the missing molar in the mouth of the mummy. The minuscule difference could be due to erosion of the gums after the tooth was extracted.