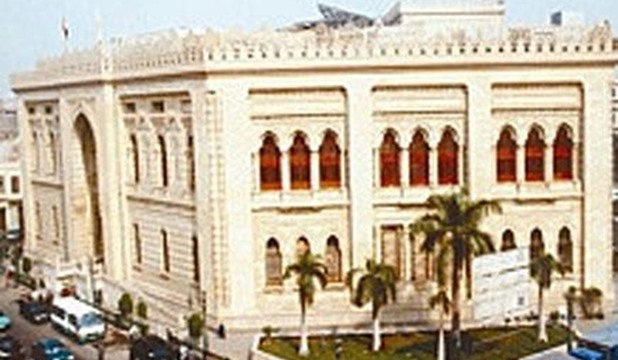 The National Library at Bab al-Khalq: Memory of a Nation

Like his father, Mohamed Ali, who was the first Egyptian ruler to create an integrated development plan, Khedive Ismail was known for his devotion to cultural development in Egypt.
First, Mohamed Ali mobilized the country's resources to serve his ambitions. Although his project of modernization was imposed upon the Nation, it eventually achieved remarkable results.
Second, cultural and urban development projects initiated by Khedive Ismail constituted the springboard to the culture of the Nation; many cultural institutions that were established by Khedive Ismail presented vivid evidences of his achievements in this area.
For example, Dar al-Kotub, formerly known as the   Kotub Khana of Egypt (The National Library of Egypt), was one of the major cultural projects accomplished by  Khedive Ismail. Ismail initiated this project on March 23, 1870, when he decided to establish a public library.

He issued a Decree that Ali Pasha Mubarak, the Minister of Maaref (Education) at that time, would be in charge of collecting manuscripts and books that were given to mosques and educational institutions by members of the royal family and scholars.

Ali Pasha Mubarak transferred the books written in different languages to the new Library. According to the advice of Ali Pasha Mubarak, the new library was planned in the style of the National Library in Paris. Appreciating the role of culture in enhancing development in society, Khedive Ismail offered all types of support and assistance to his Minister of Education to fulfill his ambitions. The Khedive also paid special attention to the Nation's monuments. He commissioned the celebrated French archaeologist, Auguste Mariette, to upgrade the storage rooms of the monuments in the Boulaq district in Cairo.

There is no doubt that Khedive Ismail was one of Egypt's great rulers, who supported the international role of Egyptian culture with its cultural and literary outpourings, history, and heritage. Khedive Ismail's Kotub Khana largely contributed to Arab and Islamic culture. Since its opening, the library has served as a national university and has given birth to thousands of thinkers and scientists.

It is obvious that the Palace of Prince Mostafa Fadel, which was used as the place for the library, became over-crowded with the constant flow of new books and publications in 1886, the year for imposing the new law of depositing any publications in the library's registers. Therefore, the Ministry of Public Works urged the Cabinet on January 19, 1898 to confiscate a plot of land in order to build a new and larger library. The landlords were compensated for this seizure. On February 17, 1898, Khedive Abbas Helmi II released the confiscation Decree. Khedive Helmi II also commissioned the Ministry of Public Works to build the new library in the style of internationally known libraries around the world.
The foundation stone of the new edifice was laid on January 1, 1899. The festivities, which took place in Bab al-Khalq, were led by Khedive Abbas Helmi. Books, in fact, occupied the entire building; however, the ground floor was dedicated to the Antique-Khana (House of Islamic monuments, known today as the Islamic Museum).
The library was built in 1903, and the opening ceremony   took place in February 1904.

The library's invaluable assets and rich titles attracted the attention of scholars and members of the intellectual community in Egypt, as well as many cultural circles in different Arab and Muslim countries. Dar al- Kotub in Bab al-Khalq also helped in creating a remarkable cultural atmosphere and it played a significant role in enhancing the cultural life in Egypt.
Dar al-Kotub's importance increased after the outbreak of the Egyptian Revolution on July 23, 1952. In fact, the Egyptian Revolution paid great attention to cultural activities, including theatre and cinema and it gave great support to Dar al-Kotub. The over-crowding of books and the increase of readers using the library, nonetheless, prompted urgent plans to move it to a new building overlooking the Nile. The new site was officially opened in 1971. Since that time, the old building in Bab al-Khalq was left unused for more than 25 years.
In the mid-1990s, plans to restore the building in Bab al-Khalq were revived  to regain its illustrious position on the country's cultural map, as the memory of the Nation. The plan
aimed at upgrading the new building, which overlooks the Nile, so that it could serve as the National Library; while, the old building at Bab al-Khalq to be used in exhibiting and availing manuscripts, papyri, rare books, and literary classics to researchers, scholars, and readers. Furthermore, the committee which was assigned to upgrade the Bab al-Khalq's edifice recommended that a museum should be opened in the building to specifically display Egypt's great contribution to Arab and Islamic culture and mankind in general. Accordingly, rare copies of the Holy Koran, manuscripts, and invaluable exhibits were moved to the new museum.

However, the old building at Bab al-Khalq was not properly equipped to serve as the National Library. Today's building is capable of exhibiting more than three million books, manuscripts, papyri, and periodicals.
The Bab al-Khalq old library is also planned to operate in the style of the National Library in Paris. The latter exhibits manuscripts, coins, maps, and provides access to a Musical Library. It is known that the French allocated a new building overlooking the Seine River in southern Paris to serve different purposes and exhibit different cultural acquisitions.

1- Preservation of manuscripts, whether Arabic, Turkish, or Persian, and assisting scholars in their researches. Modern information and communication facilities are available to users from around the world. Moreover, visitors should expect an easy and interesting journey in the Bab el-Khalq building using its different facilities. The library is also equipped to enhance the meticulous usage of the library's rich heritage collection. In addition, the edifice's well-equipped laboratory helps restore damaged manuscripts according to scientific methods.
Daralkotob.com remarkably brings the edifice and its invaluable contents to the fingertips of scholars and admirers of Arab and Islamic culture throughout the world.

2- Preservation of the rudiments of literary and scientific writings, which had arrived in Dar al-Kotub since its opening. Some of these writings and books were printed in Boulaq Print House. The invaluable titles in Dar al-Kotub include books written in French, English and Turkish and published in the 18th century.

3- Preservation of maps and papyrus illustrations, which are considered Dar a1-Kotub's rarest exhibits. These items, which are stored digitally, are available for scholars and researchers.

4- The building's interior has been redesigned to add the beautiful panoramic view within and in the meantime make the best use of spaces. Incongruous walls, which were added during former expansion works, were eliminated. The project is the highlight of Egypt's immense contribution to Arab and Islamic cultures.

5 - Dar al-Kotub has been spruced up to enhance Egypt's image and role, regionally and internationally.

The renovation and upgrading project of Dar al-Kotub was initiated in late 2000 and was completed successfully in December 2006. Part of its L.E.85m budget was represented in L.E.29m donations offered by Egyptian and Arab personalities and institutions.
Visitors of the majestic building of Dar al-Kotub will quickly realize that architects successfully produced a brilliant marriage of the building's unique architecture and modernity. Egyptian engineers, architects, consultants and workers have achieved a great task.

Dar al-Kotub, which is widely regarded as an outstanding example of architecture, witnessed unfortunate circumstances over the years. The historic building was rescued from long years of neglect only after an ambitious renovation and conservation project has been implemented since 2000. Dar al-Kotub is considered a wonderful expression of using modern technology as it is an invaluable place for the protection of Arab heritage including rare books and manuscripts.
In addition to the basement, the building consists of the main floor and two mezzanines. The main floor has reading rooms and the Museum of Manuscripts, which are three floors high. The first mezzanine has the Microfilm Room and the Internet. The second mezzanine has the Research Hall, Restoration Lab, and the Papyrus Hall. The entire building is a remarkable example of blending historical originality and modernity.

Dar al-Kotub and the Islamic Art Museum were damaged due to a car bomb on January 24, 2014 targeting Cairo Security Directorate, Bab el-Khaleq, Cairo.

After assessing the damage, it was found that all show cases were smashed in addition to a number of manuscripts and books due to water sewing from broken water pipes and smashed glass.

The Ministry of State for Antiquities is working to remove the effects of this terrorist attack to restore the manuscripts and books in order to have Dar al-Kotub back to its good condition.