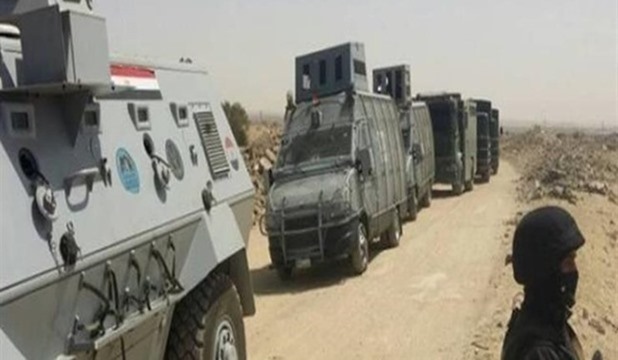 The Interior Ministry has announced that “a number of policemen” were killed and injured during a shootout following a raid on “a terrorist elements’ hideout” on Egypt’s Western Desert Friday.

It added that a number of terrorist elements were also killed during the shootout.

The raid took place after a national security unit was informed of the hideout in an attack in a desert area of El Wahat to the West of Cairo.

According to the statement, the shootout took place when forces were attempting to raid the hideout, leading to an exchange of fire initiated by the militants.

The police said a number of militants were also killed during the shootout, but didn't release any figures about the deaths either of militants or of police.

The Interior Ministry said, in a statement, that the security forces are still combing El Wahat road of Giza governorate in search for runaway terrorists.

The Interior Ministry confirmed the deaths of 16 policemen.

Among the victims were 11 officers, four privates and one Sergeant, the Ministry statement said. In addition, the search continues for a single officer from the security Directorate of Giza.

It is also reported that 13 officers were injured, among them four officers and 9 privates.

The recordings circulated by some media outlets about the Wahat shootout are false and baseless, according to a statement released by the Ministry of Interior's security media center.

The statement added that those recordings came from unreliable source and provided inaccurate details about the Friday clashes.

The Ministry of Interior urged newspapers and the mass media to check the accuracy of news with official sources of the ministry, pointing out that spreading such recordings confuses public opinion and reflects the lack of responsibility in media.

The ministry also demanded the mass media to ignore those recordings and do not rely on them as sources of information.

He expressed denunciation of all terrorist attacks targeting civilians and their full support of Egypt in face of terrorism.

On Friday, militants opened fire on a group of Egyptian policemen during a raid on their hideout on al Wahat road.

The forces reportedly went to the mission following a tip-off about the terrorist hideout.

Spain has strongly condemned a terrorist attack that occurred on the Wahat road, near Giza, on Friday.

In a press release, issued by its embassy in Cairo on Sunday 22/10/2017, the Spanish government offered condolences to the Egyptian authorities and the families of the victims.

The statement asserted support for Cairo in the fight against terror.

Sixteen police officers and personnel were killed in the shoot-out.

Ambassador of Belarus in Cairo Sergei Rachkov condemned on Sunday 22/10/2017 a terrorist attack that killed 16 of the Egyptian police on the Wahat road on Friday.

In statements, Rachkov asserted support for Cairo in the fight against terror, offering condolences to the Egyptian state, people and the families of the victims.

He wished a speedy recovery for the injured.

On its twitter page, the embassy said “Our deepest condolences to the families of the police officers killed yesterday in Bahariya Oasis in Egypt's Western Desert.”

“We wish a speedy recovery to those who were injured. Canada continues to stand with Egypt against such acts of terrorism.”

Commander of the Libyan army Khalifa Haftar mourned on Sunday 22/10/2017 Egyptian policemen who were killed and wounded in a coward terrorist attack in Al Wahat area in Giza Friday.

Haftar offered his heartfelt condolences to Egyptian people and government over the victims of the terrorist attack.

The United States strongly condemns the terrorist attack against Egyptian security forces near the Bahariya Oasis yesterday, which killed dozens of Egyptian personnel and wounded many others.  We offer our profound condolences to the families of the deceased and the government and people of Egypt, and extend our best wishes for the full and speedy recovery of those injured.

The United States stands with Egypt at this difficult time, as we continue to work together to fight the scourge of terrorism.

On the 21st of October, Egyptian Minister of Foreign Affairs Mr. Sameh Shoukry received phone calls from the ministers of foreign affairs of France and Italy offering condolences with regard to the martyrs of the vicious attack in Al-Wahat, which led to the martyrdom and injury of a number of heroes of the Egyptian police.

The Official Spokesperson of the Egyptian Ministry of Foreign Affairs clarified that the two ministers stressed the full support of France and Italy to Egypt, government and people, against terrorism. They also strongly condemned the attack. The Spokesperson noted that Mr. Shoukry affirmed that such lowly acts will not weaken the will of the army and police as they will continue eradicating   the roots of terrorism through sacrificing all what is precious and valuable for the sake of the security and stability of Egypt. He also said that Egypt values the positions of all the friendly nations that offer support in hard times.

UAE Minister of State for Foreign Affairs Anwar bin Mohamed Qarqash underlined his country's support and solidarity with efforts of the Egyptian government for fighting terrorism.

This terrorist crime will not sap the determination of the Egyptian people for uprooting terrorism, he added, in statements to the UAE news agency (WAM).

Also, Oman condemned the terrorist attack, according to the Omani news agency.

Oman is siding with Egypt until ending the scourge of terrorism, the agency quoted an Omani Foreign Ministry statement as having said.

Abul Gheit underlined full support for the Egyptian State in its battle against terrorism that is seeking to intimidate the Egyptian people, said the spokesman.

The attack confirms once again the big danger posed by terrorism against the Arab societies, the spokesman quoted the AL chief as saying.

The German embassy here on Saturday mourned the victims of a terrorist operation that took place in Wahat area on Friday leaving several policemen dead and wounded.

In a released statement, the embassy said that there is no justification for acts of violence.

Berlin is siding with the Egyptian people in their war against terrorism, added the embassy, which extended condolences to the families of the martyrs and wished speedy recovery for the wounded.

British Ambassador to Egypt John Casson expressed condolences to the families of policemen killed in a terrorist attack on Friday in the Wahat desert of Giza.

On his twitter page, the ambassador asserted that Egypt and the UK are standing side by side to confront terrorism.

The Interior Ministry said Friday a number of policemen were killed in a shootout following a raid on a hideout used terrorist cell on el Wahat desert way.

It added that a number of terrorist elements were also killed during the shootout.

The Kingdom of Saudi Arabia expressed its strong condemnation of the terrorist attack on security forces in Egypt's Giza, the Saudi Press Agency (SPA) reported.

An official at the Saudi Foreign Ministry offered condolences and sympathy to the families of the victims, the governments and people of Egypt. He wished the injured a quick recovery.

Also, he reiterated the Kingdom's solidarity with Egypt in its fight against terrorism and extremism.

The Foreign Ministry of the Libyan interim government on Saturday extended condolences to the Egyptian government over the death of dozens of security personnel in Friday's terror attack that took place in Wahat area in Egypt's Giza governorate.

In a statement on Saturday 21/10/2017, the ministry condoled with Egypt's president, people and families of the martyrs.

The Libyan interim government reiterated its absolute solidarity with Egypt in its battle against terrorism which targets country's security, the statement read.

In a statement on Saturday 21/10/2017, the French top diplomat expressed condolences to the families of the victims and wished those injured speedy recovery.

Blood of martyrs will boost determination to uproot terror-- spokesman

Foreign Ministry Spokesman Ahmed Abu Zeid on Saturday said that cowardly terrorism is hiding inside the hotbeds of shame and disgrace.

In a tweet, he added that the clean blood of Egyptian martyrs will enhance the Egyptians' determination to uproot terrorism.

Coptic Catholic Patriarch of Alexandria Ibrahim Isaac on Friday mourned police personnel who were killed in a terrorist attack in the desert of Wahat.

In a statement, Isaac offered condolences to the families of the victims and wished the injured a speedy recovery.

In a released statement, the governor extended condolences to the Ministry of Interior and families of the victims.

Minister of Civil Aviation Sherif Fathy and all ministry workers on Saturday mourned the victims of Wahat terrorist attack that took place on Friday leaving scores of policemen dead and wounded.

In a released statement, he extended condolences to the families of the victims and the Egyptian people.

Minister of Environment Khaled Fahmy on Saturday mourned the victims of a terrorist attack that targeted policemen in Wahat area on Friday.

In a press statement, he said the clean blood of the brave servicemen will not go in vain and terrorists will not be able to tamper with the future of the sons of Egypt.

The Egyptian soldiers will remain steadfast standing up to any terrorist operation until uprooting terrorism from Egypt, he added.

Head of the Central Authority for Organization and Administration (CAOA) Mohammed Gamil on Saturday mourned the victims of policemen who were killed during an exchange of fire with terrorists in Wahat area, Western Desert.

Gamil extended condolences to the families of the martyrs.

The sacrifices of policemen and Armed Forces will always remain the driving force behind Egyptians' determination to achieve development, CAOA noted.

He added that such cowardly attacks will not undermine the steadfastness of the Egyptian people for fighting terrorism.

Minister of Planning and Administrative Reform Hala el Saeed on Saturday extended condolences to the Egyptian people over the victims of Friday's terrorist attack that took place in Wahat area leaving several policemen dead and wounded.

In press statements, she said that the brave policemen were killed while fighting cowardly terrorists.

The clean blood of the martyrs will pave the way of glory for the homeland, she said, pointing out that "our heroes will not be deterred by terrorism".

A prosecution team, led by first attorney-general of the Supreme State Security Prosecution counselor Khaled Diaa el Din, headed to police hospitals in Agouza, Nasr City and el Shorouk city to examine the victims' bodies and listen to testimonies of the wounded.

Police hospitals have so far received 17 policemen killed and injured in the incident.