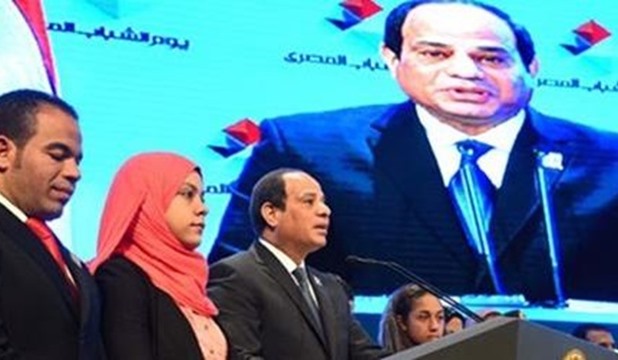 President Abdel-Fattah El-Sisi attended on 9/1/2016 the celebration of National Youth Day at the Cairo Opera House, through the State’s belief in importance of youth contribution in drafting Egypt moment, and creating its future.

During the event, El-Sisi launched the “Bank of Knowledge,” a project that aims to gather the largest international encyclopedias, research papers, theses, books and articles in one website free for all Egyptian citizens.

A documentary film about some youth models has also been presented, which are considered illuminated signs highlighting the identity of Egyptian youth, giving hope and spreading its positive energies throughout the country.

President El Sisi called on the successful models presented in the video of the Egyptian Youth Day celebration to stand by him, announced during his speech that 2016 is the year of the Egyptian youth through a systematic scientific system.

Mr. President also issued a package of decisions and mandates to activate the role of youth in the national work system and empower them in all fields.

Minister of Youth and Sports Khaled Abdel Aziz also delivered a speech in which he said that the ministry is keen on developing the sports system to qualify athletes in all governorates, he also stressed the continuation of efforts to establish and develop youth centers to accommodate as many of them as possible.

He pointed that the country authorities seek to provide suitable environment in order to create a new generation of young people.