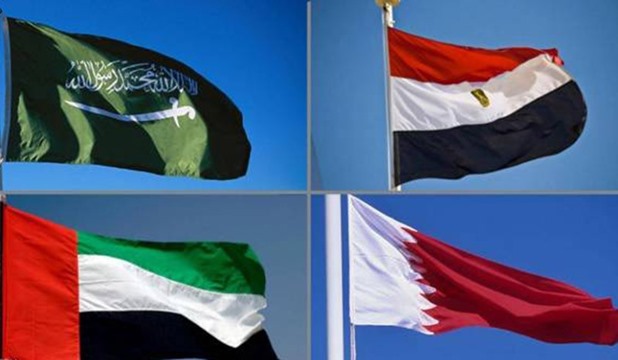 Egypt announced on 5th June 2017 that it was severing diplomatic relations with Qatar due to its ongoing support for terrorist ideologies and meddling in the internal affairs of Egypt.

The move was taken "in light of the continued insistence of the Qatari government on taking a stance against Egypt," the Foreign Affairs Ministry said in a statement on Monday.

The ministry said that the move followed "the failure of all efforts to persuade Qatar against supporting terrorist organizations, chiefly the terrorist Muslim Brotherhood organization, and harboring its leaders who have been convicted of terrorist attacks that targeted the safety and security of Egypt."

The Egyptian government also accused Qatar of interfering in the domestic affairs of Egypt and other countries in the region in a manner that "jeopardizes Arab national security."

The ministry said that Egypt would close its airspace and seaports to all Qatari transportation with a view to protecting its national security.

The Foreign Ministry issued on June 5, 2017 a statement to explain reasons for breaking off diplomatic relations with the state of Qatar.

The Ministry of Foreign Affairs announced breaking off diplomatic relations with the state of Qatar because of the Qatari rule insistence on adopting a hostile attitude towards Egypt, the failure of all attempts to dissuade it from supporting terrorist organizations topped by terrorist Moslem Brotherhood, providing a safe haven for its leaders who were indicted by the judiciary in terrorist operations targeting Egypt's security and stability, besides promoting the thought of Al Qaeda and Daesh, its interference in the domestic affairs of Egypt and the states of the region in a manner that threatens Arab national security and sowing the seeds of dissension in Arab communities according to a well studied scheme which targets the unity and interests of the Arab nation.

The statement said Egypt has closed its airports and naval ports in front of all Qatari means of transportation, out of its keenness to maintain Egyptian national security.
.

The four countries released the names saying this comes in light of their commitment to fighting terrorism, drying up their sources of funding, combating extremist ideology and its dissemination and working together to eradicate it and immunize communities, according to a statement carried by Al Arabiya News.

The four countries said they made the list as a result of the violations that Qatar keep making by supporting terror groups.

“As a result of the continued violation by the authorities in Doha of the obligations and agreements signed by them, including the pledge not to support or harbor elements or organizations that threaten the security of states and to ignore the repeated contacts that they called upon to fulfill what they had signed in the Riyadh Agreement of 2013, its implementing mechanism and the supplementary agreement in 2014; The four States have agreed to classify 59 individuals and 12 entities on their prohibited lists of terrorists, which will be updated in succession and announced,” the statement said.

Egypt, Saudi Arabia, the UAE and Bahrain set 13 preconditions to end severing relations with Qatar. A list of these preconditions was handed over to Qatar by Kuwait on 23/6/2017.

Following are the preconditions:

2. Immediate termination of the Turkish military base in Doha that is now under construction and ending any military cooperation with Turkey.

3. Severing all relations with terrorist organizations, atop of which come the Brotherhood, Daesh, Al-Qaeda, and Hizbollah.

4. Stopping all forms of Qatari funding of any individuals, groups or organizations that have been designated as terrorists by Saudi Arabia, the UAE, Egypt and Bahrain.

5. Handing over all terrorist elements that are wanted in Saudi Arabia, the UAE, Egypt and Bahrain to their countries of origin and not harboring any other elements in the future.

6. Shutting down Al Jazeera TV channel and its affiliate stations.

7. Shutting down news outlets that are financed by Qatar either directly and indirectly.

8. Ending interference in the internal affairs of other countries and their foreign interests while stopping any contacts with opposition elements of the four countries.

9. Paying off compensations to the four countries for losses and casualties that were caused due to Qatar’s policies in recent years.

10. Qatar's policies and stances should be in harmony with other Gulf and Arab countries.

11. Qatar should hand over all databases of opposition elements which it supports while explaining all forms of support it offers to them.

12. These preconditions should be approved within 10 days of their announcement otherwise they will be deemed null and void.

13. Reports will be compiled regarding an agreement on this score, if it would be reached, once per month for the first year and then once every three month for the second year.
.

The foreign ministers of Egypt, Saudi Arabia, the UAE and Bahrain; the four Arab countries fighting terrorism, issued a joint statement on Wednesday after a lengthy meeting that was held in Cairo earlier in the day and lasted for four hours. The meeting took up their crisis with Qatar over its support for terrorism and interference in the internal affairs of the four countries.

Following is the text of the joint statement that was read out by Egyptian Foreign Minister Sameh Shoukry after the meeting:

The foreign ministers of the Arab Republic of Egypt, Saudi Arabia, the UAE and Bahrain met in Cairo on July 5, 2017 for consultations over current efforts being exerted to stop support by the State of Qatar for terrorism and extremism and its interference in the internal affairs of Arab countries and the subsequent threats of the Qatari policies on the Arab national security and international peace and security.

The four countries confirmed their stance which is based on the necessity of commitment to all international agreements, conventions and resolutions along with the well-established principles of the charters of United Nations, the Arab League and the Organization of Islamic Cooperation along with agreements on fighting international terrorism.

The following principles were highlighted:

1- Commitment to fighting terrorism and extremism in all their forms and preventing their funding or providing safe havens for terrorists.

4- Commitment to the outcome of the Arab-Islamic-American Summit that was held in Riyadh in May 2017.

5- Stopping interference in the internal affairs of other countries and stopping supporting outlawed entities.

6- All countries of the international community are responsible for fighting all forms of terrorism and extremism as they constitute a threat to international peace and security.

The four Arab countries confirmed that supporting terrorism and extremism and interference in the internal affairs of Arab countries do not tolerate any bargaining or procrastination. The demands that were presented to Qatar came within the framework of guaranteeing commitment to the six principles that were above mentioned and for protecting the Arab national security and maintaining the international peace and security along with fighting terrorism and extremism. These demands are also meant to provide a suitable atmosphere for hammering out a political settlement to regional crises as it became impossible to tolerate the destructive role undertaken by the State of Qatar in these crises.

The four Arab countries underlined that the measures that were adopted and that will be maintained are an outcome of the State of Qatar's violation of its commitments in accordance with international law and its continued interference in the internal affairs of Arab countries and support for terrorism and extremism which constitute a threat to regional security.

The four countries extended thanks and appreciation to Kuwait Emir Sheikh Sabah al-Ahmad al-Sabah for his good offices with Qatar. They regretted the negative response by Qatar which showed lack of seriousness in handling the root causes of the problem and failure to reconsider its policies and practices in a way that indicates failure to recognize the gravity of the situation.

The four countries asserted their keenness on relations among the Arab peoples and their appreciation for the brotherly Qatari people. Shoukry expressed hope that wisdom would prevail and Qatar would take the right decision.

The four countries confirmed that it is high time that the international community should shoulder its responsibility towards putting an end to supporting terrorism and extremism and that there is no room now for any entity or party that is involved in practicing, funding or supporting terrorism and extremism in the international community or as a partner to any efforts for peaceful settlement to any political crisis in the region.

Within this framework, the four countries expressed appreciation for the firm stance that was adopted by US President Donald Trump on the necessity of ending immediately all forms of support to terrorism and extremism and that there will be zero tolerance with any violations by any party on this score.

The ministers agreed to follow up the situation and hold their coming meeting in Manama.

OIC calls on Qatar to honor its commitments

The General Secretariat of the Organization of Islamic Cooperation (OIC) called on Qatar to honor its previous commitments and agreements signed within the Gulf Cooperation Council (GCC), particularly with regard to ceasing support for terrorist groups and their activities and ending media incitement.

In a statement on its website, the OIC said that it has been following closely the current developments in the Gulf region, namely the severance of diplomatic relations with Qatar by many OIC member states following information and evidence of hostile acts emanating from Qatar.

It underscored the need for all member states, including Qatar, to adhere to the principles of the OIC Charter, which calls for abiding by the policy of good neighborliness, respect for sovereignty, independence and territorial integrity of member states, and non-interference in their domestic affairs.

The users of the hashtag in various Arab countries supported the decision to sever ties over Qatar's involvement in funding terrorism.

They also condemned the Qatari regime as well as its policies in backing terrorist groups and interfering in the internal affairs of the Arab countries.

Trump: Recent measures against Qatar may be beginning to end terrorism

US President Donald Trump said on Tuesday that the recent measures against Qatar could be the beginning of the end of terrorism.

"During my recent trip to the Middle East I stated that there can no longer be funding of Radical Ideology.

The Pakistan Ulema (scholars) Council has expressed its condemnation of Qatar’s support for Houthi militias and their complicity with Iran against Saudi Arabia, according to a statement released on Monday.

“It is regrettable and alarming that the State of Qatar announced its support for Iran after the Arab-American Islamic Summit, in which 56 Islamic countries announced their efforts to combat terrorism,” said Taher Mahmood al-Ashrafi, chairman of the council.

The council also condemned Qatar’s of terrorist and extremist organizations that “seek to destabilize security in a number of Islamic countries”.

“Qatar should have sought the support of Muslims in Syria, Iraq and Yemen rather than supporting Iran in its regional plans,” the statement added.

President Abdel Fattah El Sisi and US President Donald Trump on Friday 09/06/2017 stressed over the phone the necessity to continue combating terrorism decisively.

During the call, the two leaders underlined the importance of standing united against terrorism, armed and terrorist groups and countries financing and supporting terrorism both morally and materially.

They also agreed that the policy of interfering in other countries' affairs by supporting terrorist groups and extremist thought in the region is unacceptable.

They stressed the determination of Egypt and the United States to continue coordination and consultation at the highest levels to ensure that efforts exerted will restore stability and eradicate terrorism in the Middle East region.

Sisi, during the phone conversation, lauded Trump's participation in the Arab-Islamic-American summit that was held in Riyadh in May and culminated in forming a united front to confront terrorism at all levels, the spokesman added.